Posted Wednesday Morning:
True to schedule (below), come Wednesday and parts of Delhi NCR got showers. Several reports have come in with Arpit mentioning heavy rains in Ghaziabad, and Noida getting 4/5 mms.
A-3 is showing its strength in the region as mentioned. 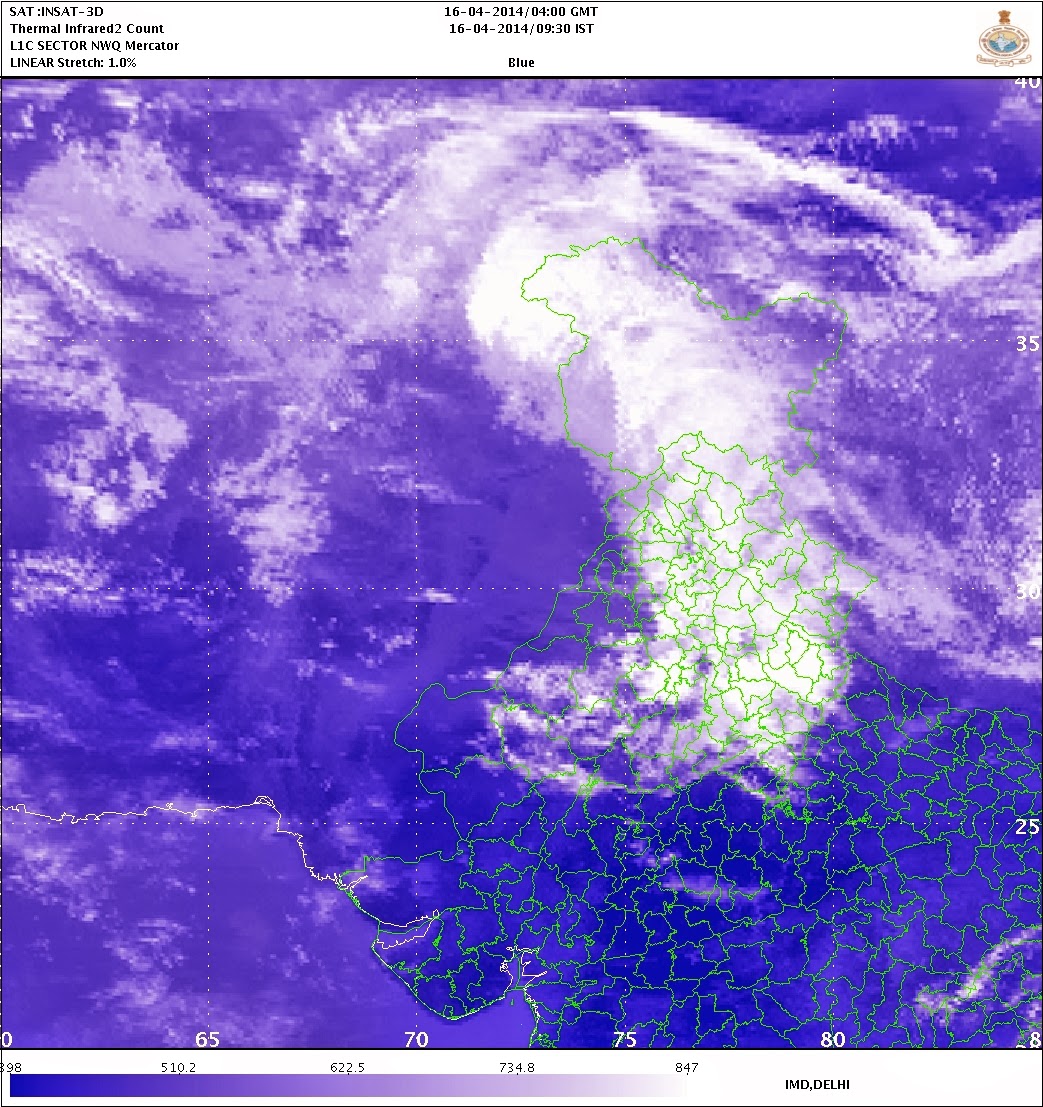 And, A-4 trough has formed and the induced UAC taking shape soon.
As mentioned, will keep day temperatures down. Diagram shows the oscillating averages between "red" and "blue", which has kept the overall average (for Delhi) almost on normal level, 0.01c below.

As per below estimate, Tuesday Night / Wednesday, Can expect light drizzles in Karachi. Hyderabad may get light showers, Nawabshah also light showers amidst cloudy weather. Around 5-7 mms in Nawabshah possible.

Tuesday 15th April:
A-3, as a trough with an induced Low moves into Pakistan. Rain is expected in Northern regions of Pakistan and most parts of Central and Northern Sindh. Rainfall increases in Sindh towards night. Expect rainfall in Faisalabd, Sukkur, Dau and Nawabshah regions. Besides all regions of Pak Punjab.
Rainfall also effective in Kashmir and HP on Tuesday.
Fairly heavy rainfall in Kerala and S.I. Karnataka.

Wednesday 16th April:
Effect of A-3 moves into Northern India.Besides Kashmir and HP, we can see rainfall in Rajasthan and Punjab, Haryana and parts of
Delhi NCR may get thunder showers in parts of the region. Delhi will not rise to above 35/36c next few days.
Udaipur region may get a thunder shower in the evening.
Rainfall from a UAC is expected in Chattisgarh and Jharkhand.

Thursday 17th April:
Though the WD moves eats from Pakistan, decreasing rainfall in Sindh, we see continuing rains in Northern Pakistan and Pak Punjab.Indian Punjab, Haryana and Kashmir and HP too gets continuing showers.. Rains will also be effective in parts of Northern MP. Odisha gets heavy thunder showers. Bhubaneshwar and Raipur will see thunder showers.

Friday 18th April:
A-4 moves in with a deeper trough, bringing rains to Himalayan Hill states and more thunder rains to the plains of Pak Punjab, Central and Upper Sindh and parts of Southern Sindh around Hyderabad and Karachi.
The Indian states of Rajasthan, Punjab, Haryana, Delhi NCR, West UP and North MP get thunder showers. Pockets of Interior Maharashtra will get thunder showers.
Aurangabad and Marathwada can get thundershowers.

All this sounds good, but not so well for the MW-2 preparations.
The average temperatures in the sub Continent for April are really not heating up, ( except the Bengal belt) and the weekly map and 1 day map of Monday 14th shows near normal with below normal pockets, and now the entire regions mentioned above will see below normal temperatures, with day temperatures dropping a couple of degrees, and remaining below normal....and, does this mean well for the formation of the seasonal low ? 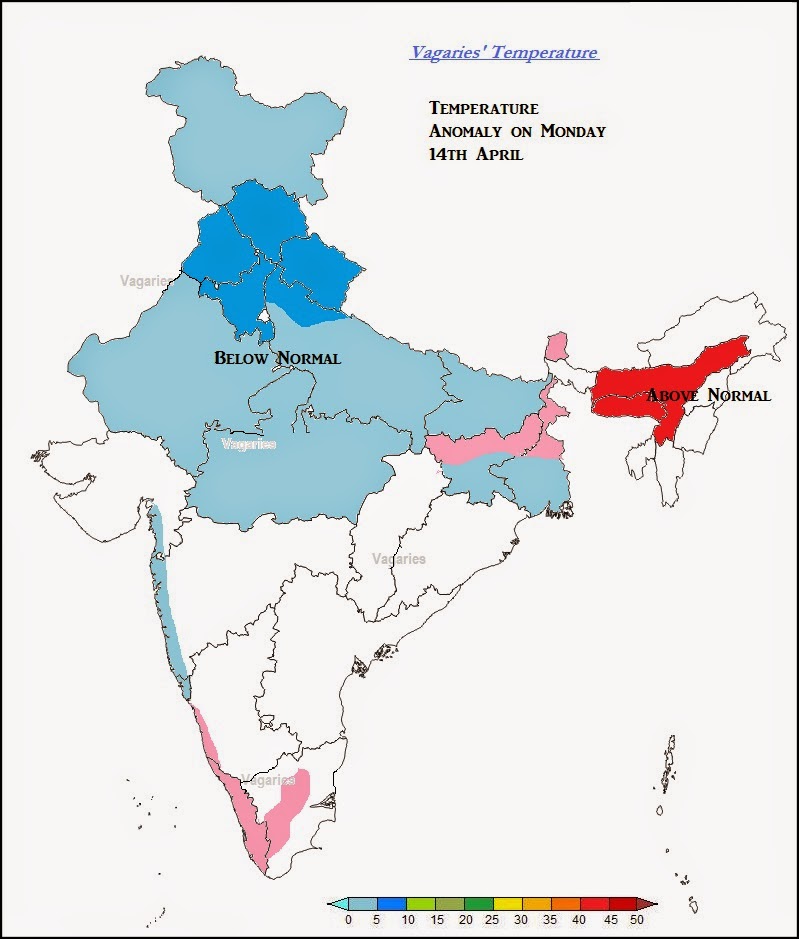 Only consolation is that Bengal may still heat up, and Kolkata may reach 40c in next 2 days..
Pune may hover around 40c on Tuesday and Wednesday, with night temperatures rising .
Bangalore too will be hot around 35c, but chance of thundershowers on Thursday /Friday.

Here we go again the pleasant weather will be nice but in the long run bad parameter for the SW monsoon. As it is they are forecasting 2014 as exceptionally hot god knows what we will experience. We Indians can cope heat god bless the people of the cooler clime's

Kesava agree with you. TN weather scientist should first analyze what is causing NE monsoon currents to elude SE India? (TN/Rayalseema/SE KAR and of course Sri Lanka also). This is consistently occuring for last 3 years and this year may be no different. Is huge climate causing NE monsoon to vanish? Risk for people and poor farmers - no water. Guess even rain water harvesting will not work when NO rain ever falls.

southern India still has May to suffer from blistering heat. monsoon for SE india is a distant reality.

Thanks so much sir,What should happen in this summer rains? And coming NEM?
Now adjoining areas of KARUR, DINDIGUL, TRICHY, THIRUPUR DISTRICTS at CENTRAL TAMILNADU here people searching water below 800 feet depth expensing lakhs of mone!??!!??!!!??
No fodder, No water, No farming,No trees, No income to farmers because of NO RAINFALL...FOR 3 YEARS...