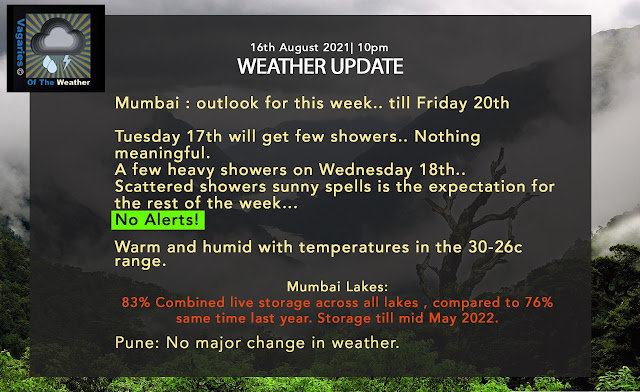 The negative Indian Ocean Dipole (IOD) event is likely to continue into southern hemisphere spring. A negative IOD increases the chances of above average winter–spring rainfall for much of southern and eastern Australia.

The most recent weekly IOD index value is −0.37 °C, with easterly winds across the tropical eastern Indian Ocean over the past week acting to ease the negative IOD values somewhat. However, this is likely to be only temporary, with most climate models surveyed by the Bureau predicting negative IOD conditions are likely to persist during spring.

The El Niño–Southern Oscillation (ENSO) remains neutral with most oceanic and atmospheric indicators within the neutral range. The Southern Oscillation Index (SOI), which recently had moderately strong La Niña-like values, has returned to neutral values, with the 30-day value to 15 August at +6.3. Most climate model outlooks indicate the central tropical Pacific is likely to cool over the coming months, but remain ENSO-neutral. Three of seven models surveyed by the Bureau are indicating this cooling will be enough to reach La Niña thresholds in spring, but only one of these persists for longer than one month. This cooling of the tropical Pacific may be contributing to the wetter than median rainfall outlooks in Australia, along with the negative IOD.

The Southern Annular Mode (SAM) index has recently dipped to negative values but is forecast to return to neutral levels in the coming days, and remain so for the next fortnight. A neutral SAM has little influence on Australian climate.