Some medium to nominal rainfall along West Coast and Southern Peninsula.

Scanty rainfall in all the other major regions.

Outlook for some Regions/Cities next 4 days till 25th June:

Pune: Partly cloudy with light rains in parts. Warm in the day with temperature range between 31 - 21c.

Kolkata: Few showers with slight increase in rainfall from 24th. 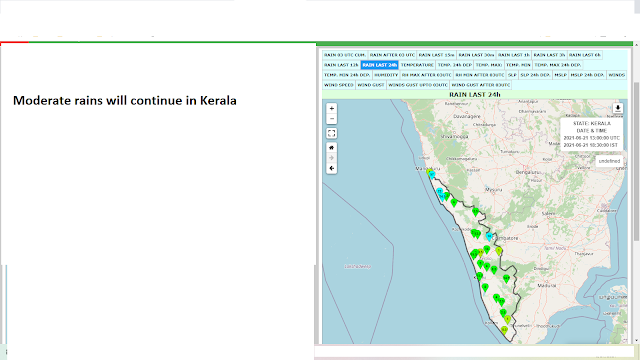 Increasing chances of a negative IOD event in 2021

The Indian Ocean Dipole (IOD) index has been below the negative IOD threshold for the past five weeks, with no models forecasting a rise in the index any time soon. Large parts of the eastern Indian Ocean are now warmer than average, with cooler than average waters near the Horn of Africa - a pattern typical of a negative IOD. Four of the five climate models surveyed by the Bureau predict a negative IOD for the second half of the southern hemisphere winter and into spring.

A negative IOD event is declared when there have been at least eight weeks below the IOD index threshold of -0.4 °C. Negative IOD conditions increase the chances of above average winter–spring rainfall for parts of southern Australia.

The El Niño–Southern Oscillation (ENSO) remains neutral with all oceanic and atmospheric indicators within the neutral range. Most climate model outlooks indicate this neutral ENSO state is likely to continue for the southern hemisphere winter and early spring, with tropical Pacific sea surface temperatures slowly cooling over the coming six months. This cooling pattern may be partly contributing to the wetter than average climate outlooks for parts of eastern Australia.

The Southern Annular Mode (SAM) has been positive for the past fortnight. Forecasts suggest SAM will return to neutral levels for the coming fortnight. Neutral SAM has little influence on Australian climate, while positive SAM typically means cold fronts and troughs are shifted further south than their usual winter path.

The Madden–Julian Oscillation (MJO) is currently weak or indiscernible. Most climate models suggest the MJO will re-emerge briefly in the African region. At this time of the year, the MJO influence is primarily in the northern hemisphere, and it therefore has less influence on northern Australia.