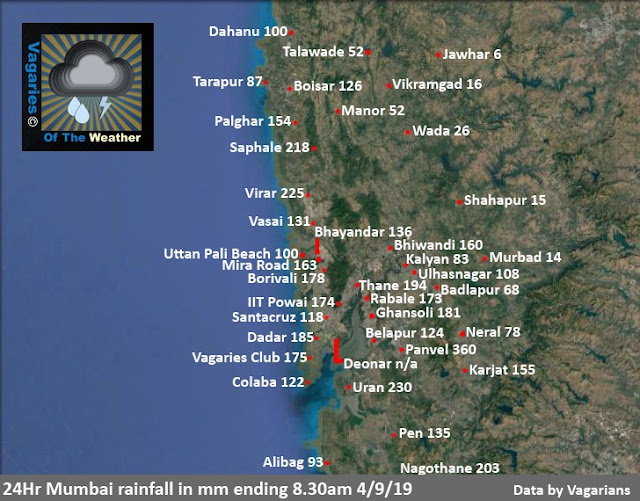 When will rains ease of Mumbai...why no such prediction in blog ..of severe weather

Rajesh, What are the highest seasonal rainfall amounts for Mumbai ? Top 5, which years ? Thanks.

U missed the bus this time in your prediction

A difficult question. We have had 3 incidences of extreme rain in Mumbai this season each crossing 200 mm in a 24 hour period. Though I have followed Vagaries and other forecasts too, no model has been able to correctly forecast this intensity this year. What is the reason for this ? Is it due to some climate pattern change or is the accuracy of the models creating an error ? Could you please explain ?

Sir,
3785 is year total or till september.How doed rest of september look for mumbai and marathwada.

Hi Rajeshbhai, with all humility, few of my observations with the Mumbai Rains:
1. Mirco weather as mentioned by you is a key feature in Mumbai and hence that needs to form the foundation of forecasts - the concept of 'Now Casts' is completely missing in India. IMD issues a RED warning in the afternoon yesterday, by which time 90% of rainfall event had occurred. Not surprisingly its not rained much since then.
2. Average rainfall over a large coastal city with varied topography like Mumbai has only academic relevance as the rain figures vary very heavily. Reinforcing the point of Micro Weather as made above.
3. Usage of Doppler radars for forecasting especially now casting should be high - that's the only source which tells if a sudden vortex has formed and the direction of cloud movements

Hilariously after IMD's RED alert (which has now become a sad pattern after heavy rains) - Schools & Colleges are closed today and it's hardly rained so far!!

Sir what your views about BB10 around mumbai?

Hello sir, any possibility for karachi?

Thanks for this blog. I have found some interesting blogs on google. You can check these blogs also which are related to technologies…..
Avast Login
garmin.com/express
avg.com/retailbullguard support number