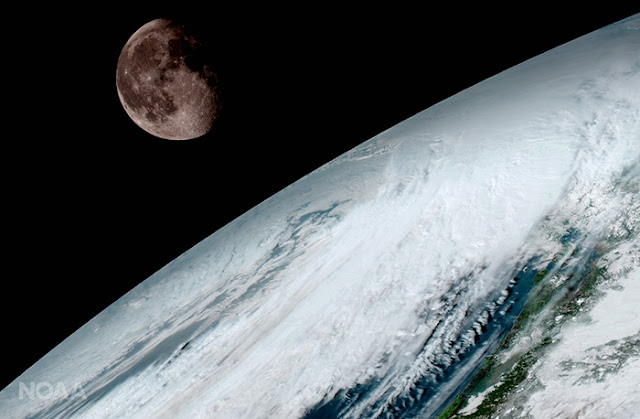 GOES-16 (previously known as GOES-R) captured this view of the moon as it looked across the surface of the Earth on January 15, 2017. Like earlier GOES satellites, GOES-16 will use the moon for calibration. Credit: NOAA/NASA
KENNEDY SPACE CENTER, FL – A new age has begun in the nations weather forecasting capabilities with the release today (Jan. 23) of the spectacular first images gathered by the recently launched NASA/NOAA GOES-16 observatory.
The highly advanced Geostationary Operational Environmental Satellite-16 (GOES-16) weather observatory lifted off two months ago atop a ULA Atlas V rocket on Nov. 19, 2016 from Space Launch Complex 41 (SLC-41) on Cape Canaveral Air Force Station, Florida.
GOES-16 (formerly known as GOES-R through the launch) is the first in a new series of revolutionary NASA/NOAA geostationary weather satellites that entails the first significant instrument upgrade to US weather forecasting capabilities in more than two decades.
“It will be like high-definition from the heavens,” says NOAA.
“Today’s release of the first images from #GOES16 signals the start of a new age in satellite weather observation!!!”
Thus the newly obtained and published imagery has been anxiously awaited by scientists, meteorologists and ordinary weather enthusiasts.
“This is such an exciting day for NOAA! One of our GOES-16 scientists compared this to seeing a newborn baby’s first pictures — it’s that exciting for us,” said Stephen Volz Ph.D. director of NOAA’s Satellite and Information Service, in a statement.
“These images come from the most sophisticated technology ever flown in space to predict severe weather on Earth. The fantastically rich images provide us with our first glimpse of the impact GOES-16 will have on developing life-saving forecasts.” 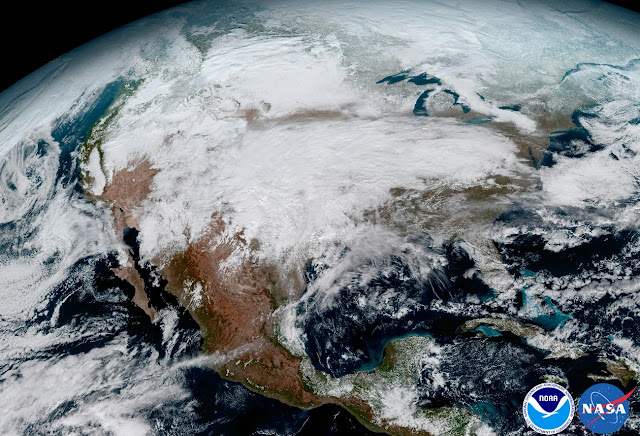 This image clearly shows the significant storm system that crossed North America that caused freezing and ice that resulted in dangerous conditions across the United States on January 15, 2017 resulting in loss of life. Credit: NOAA/NASA
An especially eye-popping image taken by GOES -16 from its equatorial vantage point situated in geostationary orbit 22,300 miles (35,800 kilometers) above Earth and published today, shows both the Earth and the Moon together – as the lead image here.
The Earth/Moon combo shot is not only fantastically pleasing to the eye, but also serves a significant scientific purpose.
“Like earlier GOES satellites, GOES-16 will use the moon for calibration,” say NOAA officials.
“GOES-16 will boost the nation’s weather observation network and NOAA’s prediction capabilities, leading to more accurate and timely forecasts, watches and warnings.”
GOES-16 is the most advanced and powerful weather observatory ever built and will bring about a ‘quantum leap’ in weather forecasting.
“Seeing these first images from GOES-16 is a foundational moment for the team of scientists and engineers who worked to bring the satellite to launch and are now poised to explore new weather forecasting possibilities with this data and imagery,” said Volz.
“The incredibly sharp images are everything we hoped for based on our tests before launch. We look forward to exploiting these new images, along with our partners in the meteorology community, to make the most of this fantastic new satellite.”
It’s dramatic new imagery will show the weather in real time enabling critical life and property forecasting, help pinpoint evacuation zones and also save people’s lives in impacted areas of severe weather including hurricanes and tornadoes.
And the huge satellite can’t come online soon enough, as demonstrated by the severe winter weather and tornadoes that just wreaked havoc and death in various regions of the US.
Another breathtaking image product (seen below) produced by the GOES-16 Advanced Baseline Imager (ABI) instrument, built by Harris Corporation, shows a full-disc view of the Western Hemisphere in high detail — at four times the image resolution of existing GOES spacecraft. 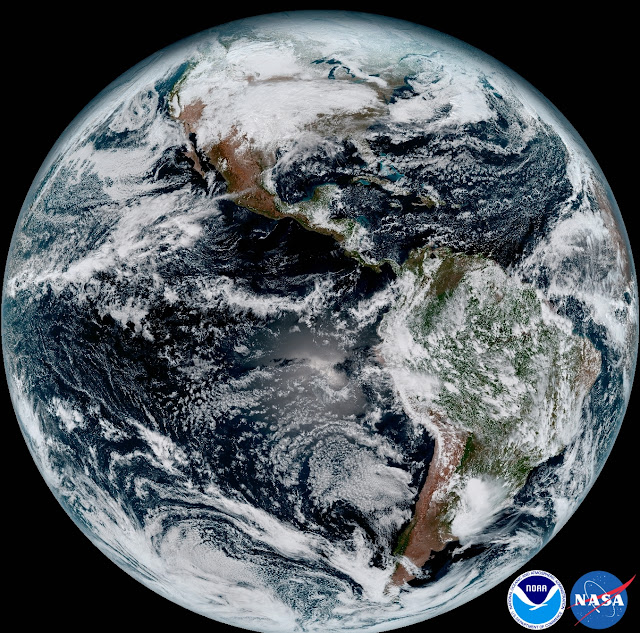 This composite color full-disk visible image shows North and South America and was taken on January 15, 2017. It was created using several of the 16 spectral channels available on the GOES-16 Advanced Baseline Imager (ABI) instrument. Credit: NOAA/NASA
The 11,000 pound satellite was built by prime contractor Lockheed Martin and is the first of a quartet of four identical satellites – comprising GOES-R, S, T, and U – at an overall cost of about $11 Billion. This will keep the GOES satellite system operational through 2036.
This next generation of GOES satellites will replace the currently operating GOES East and GOES West satellites.
NOAA will soon decide whether GOES-16 will replace either the East or West satellites. A decision from NOAA is expected in May. GOES-16 will be operational by November 2017 as either the GOES-East or GOES-West satellite. Of course everyone wants it first.
The six instrument science suite includes the Advanced Baseline Imager (ABI). ABI is the primary instrument and will collect 3 times more spectral data with 4 times greater resolution and scans 5 times faster than ever before – via the primary Advanced Baseline Imager (ABI) instrument – compared to the current GOES satellites.
“The higher resolution will allow forecasters to pinpoint the location of severe weather with greater accuracy. GOES-16 can provide a full image of Earth every 15 minutes and one of the continental U.S. every five minutes, and scans the Earth at five times the speed of NOAA’s current GOES imagers.”
Story adapted from Universe Today and written by By Ken Kremer  -
By Rajesh at February 05, 2017

Mumbai both scruz and colaba cooler than hill station mahabalsehswer

Thanks rohit for quick update on temperatures. ...Indeed what an awesome climate in mumbai last two days... wish city never gets out of such windy cool and dry atmosphere. ...