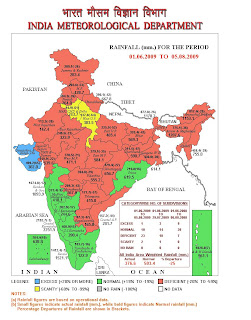 Last week's rain over India ! widely deficient and scanty ! -64%, thats the week's rain.
And overall, for the season, we come to -25%. Just see the map ! Self explanatory.

How long is this "break Monsoon" going to last now?
What I would always see in these circumstances is what has been happening off South China Sea. Often Relying on my "Pacific Typhoon" theory, and i have mentioned it quite often in many a previous blogs, that a westward tracking tropical cyclone here can propogate a depression over the Bay of Bengal roughly 10 days later. Acoording to international models, GFS, a system formation is on the anvil in the bay by early next week, around the 11th.
I too, feel the development of a system on the hinds of the last typhoon (Morakot) in the South China Sea, is possible around the 11th. Forecasts this season have been let downs several times, so i am very cautious this time again.
Rain fall will continue to be very less all over, with a few heavy falls on the eastern end of the monsoon axis.

And, temperatures are high, as predicted. On Thursday,48c in Pakistan and 41c in Rajasthan (Ganganagar) and Hissar.
Truant monsoon to continue in Mahrashtra and Mumbai till early next week. Mumbai lakes are not recieving much rain though, and in the last week, it has been negligible in the lake regions.
Mumbai rains will be around 5 mms on friday and 5-10 mms on weekend. Not much by any standards! And hot ! From the high of daily 31c, now we have seen 32/33c on Thursday.