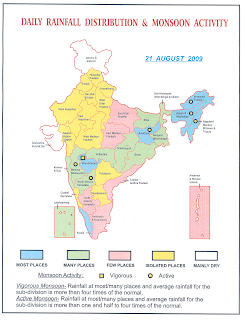 Yes Sir ! An active and vigorous monsoon in central India, especially the drought prone regions of Marathawada on Thursday/Friday! These regions got a very good inflow of moisture from the Upper Air Low" in the Arabian Sea, and good thunderstorms resulted in some very heavy rain. (Map of Monsoon activity of today).

Thunder Showers scheduled, bang on date as per our previous blogs, resulted in the estimated 75mms of rain in Mumbai (S'Cruz) on Thursday and 55 mms there again on Friday. 150 mms in Pune on Thursday and Friday. 50 mms in Aurangabad in 8 hrs. on Friday. And some more heavy rain figures from Maharashtra: Osmanabad, Kalam-9 each, Phaltan-8, Koregaon-7,Pune, Shirur, Karad, Vaduj-6 each, Santacruz, Vita, Miraj, Satara, Mantha, Mahur, Jintoor, Gankekhed, Sengaon, Kelvan, Sirpur, Dahiwadi, Sangola-5 each, Dharavi, Wai, Kagal, Hatkangle-4 each.

Ok. Now what ?
1.-The rainfall in the coastal regions of Konkan (Mumbai) and Karnataka to increase more after Monday .2.- Interior Maharashtra and Karnataka to continue with similar rains till Monday. 3.-Central India and west U.P./Delhi to get reduced rains from this weekend. North-west India, and regions across the international borders will be dry, and hot. 4.- Southwards, T.N. will be almost dry, and Karnataka rains will reduce from Monday. 5.-Gujarat, Almost dry till Tuesday, except south saurashtra.
I am trying to give a region wise forecast for the next few days, till around the 25th.- may not have explained it too clearly.
After the 25th, ECMRWF tells of a low coming from the bay. Will judge its course later. But if its coming, then surely my estimated of the rain spell continuing till the end of the month will materialise.

Mumbai, expect frequent showers, thunder in the evening, on Saturday/Sunday. Rains to the extent of 20 mms per day. Not really much to dislodge events. Evening showers can dampen outdoor activities/festivities on the weekend.
BTW, from Saturday, expecting a rise in temperatures in the regions of Oman, Dubai and neighbourhood, to reach 41c in Dubai, and 39-40c in Muscat.
By Rajesh at August 21, 2009