As the monsoon continues playing truant, the media also continues with its Met-bashing. But much of the blames and criticisms received by the Met Dept is not just, and cannot be restricted to weather men in India, but all over the world. This year, most of the international weather models have been proved wrong, specially as regards our monsoon. And this, if one re-reads, i have mentioned time and again in many of my blogs previously.
Fact is, meteorology can never achieve the accurate kind of estimate. In fact, i think no other forecast in any other field, in any field, whether it is stocks or any futuristics, can be accurately estimated.
The blame for this lies not with our weathermen but the nature of the subject, they are dealing with.
"An open system, on the other hand, deals with realities that are large and complex, and typically involve a range of variables, none of which can be isolated or controlled, much less recreated, in laboratories. The subject-matter of meteorology - continental weather systems - is an instance of the latter. Denied the benefit of real-time experiments, meteorology depends on modelling and computer simulation for its research.
A model, by definition, is not reality but an abstracted, simplified version of it. But they would have to be gods to get it right each time. Those who compare the record of the Indian Met with the western world are wrong too. Forecasting in India, by virtue of its location at the intersection of several weather systems, is infinitely more hazardous than in the West. So next time, if it does not rain, don't blame the weatherman but the complexity of his world and the limits of human knowledge."- Quoted from an article from the Times of India, some time ago.
Come on, we are meteorologists, not magicians!
As per the latest now, the monsoon is at -29%, and like i said before, anything over -10% is bad. The latest rain deviation map from IMD shows a big chunk of India in the "red".
Also,daily rain diagrams of Mumbai, Delhi and Sholapur, are shown at the end of this blog to indicate as to how little the "actual rainy days" are in the season.
Now, carrying on from the last blog, we await the formation of lows and systems from the next MJO wave. We have to keep our fingers crossed, and hope the next rain spell, from 19th. August to 1st. September, will be strong enough to at least cover up some of the deficit. It is obvious, that all the -29% will not be wiped out. As of now, there is no sign, and chances, of any low forming in the bay in the next 2/3 days.
What i personally see is the next rain spell, whether strong or moderate, will cover most of south, central, western, east and north India in its 10 day period. It may leave out a major part of north-west India.
After this spell is over, that is around the first week of September, we may see the monsoon withdrawing from the Rajasthan region.
Till end of this week, subdued monsoon all over, except along the monsoon axis, and that too,most of the rains will be near the eastern end of the line (Bengal, Jharkhund and north Orissa), and along the foothills of the Himalayas (Uttaranchal)
For Mah.Gujarat and Karnataka, monsoon revival will be only after 19th.
Mumbai, as expected, became hot at 33c yesterday, and was too stuffy for comfort. I expect high temperatures to continue next 2 days, with very little rain for the weekend. But, the humidity may be a bit less. 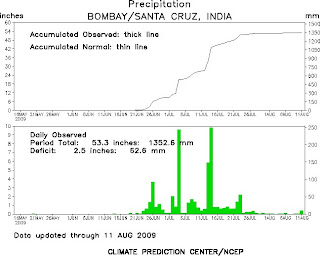 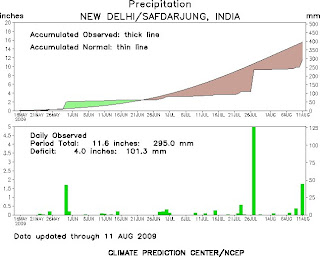 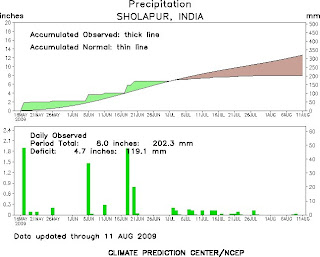 Don't quite agree to your comments on Meteorology in India. There is significant room for improvement be it in the technology used or the level of competence displayed by our department. In the US they will provide you with hourly info and they are right most of the times. I agree our weather system is very different being tropical but my personal opinion is they are doing a very shoddy job

true, and i agree with you that their is scope for a lot of improved forecasting. I feel, there are certain restrictions and constrains ,in a country like India,on the dept. too.