A well defined trough along the west coast, with the recent depression at its "head", has resulted in some fairly good rains in nirth Konkan, and Mumbai on Thursday night/Friday (25th/26th). Along this region, Dahanu recived 65mms and Harnai 61mms, with Mumbai (colaba) getting 58mms, all as on Friday morning.

But, as I have been mentioning, the inland regions of Mah./Karnatak and M.P. are still dry.
The IMD now, as of June 24/26, has moved the nothern limit of the monsoon up the west coast into Gujarat and into interior Mah..
In the Eastern region, it is still the same, more or less. Onset regions as of the 24th june was two or more weeks behind schedule over central region, and eastern India, with little or no advance during last four weeks. 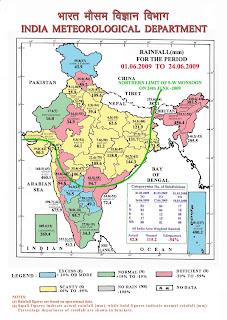 Hence, the overall rain as on 24th. June, shows a massive deficit of 54% ! Only 2 areas ( and Kashmir), in the IMD map, show a surplus, and vast regions in the central and coastal regions show scanty to below normal rains. Situation, as of the 24th, is surely not comfortable for the agriculture, hydro and overall economic scene.

A slowing down of the Westerlies into the northern Subcontinent has taken place during the last 2 days ( IMD streamline map below shows this). This should be seen as favorable,for a surge in and advance of the SW Monsoon in the next 2/3 days.

What is lacking are the usual Bay depressions. Systems from the bay are always instrumental in widespread rain into the central/western and northern regions of India. Depressions usually follow (by about one week) a western Pacific storm. This, I had mentioned, and anticipated last week itself for the typhoon "Linfa", but, there was no evidence from the storm. The bay now has to be watched again early next week in aftermath of" Nangka", now near Philippines.
Hence, the inland peninsula regions, will continue to be almost dry till first week of July. Along the west coast, the existing trough is expected to slide down , and linger off the Karnatak/Kerala coast from Monday onwards. Meaning, the rains in Konkan will reduce, to some extent, after the week- end.
Mumbai can get about 80 to 100mms on Sat/Sun. Thereafter, from Monday, it should get around 25mms/day for the next few days.
kapadias@gmail.com