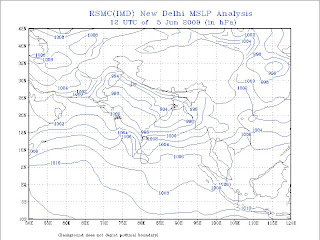 Something positive, to some extent, at last !

1. The pressure at the core of the seasonal monsoon low, which was at 996mb, as mentioned in MW-16, is now finally at the required normal 994mb. And the Arabian Sea is at 1008 mb. Enough differance to now make this sluggish monsoon edge up a bit. The IMD maps produced show a clear illustration of it all. 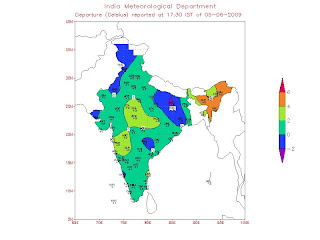 2. The central regions of India are also heating up to required temperatures again. Though not to any severe heat wave levels. Sindh had a high of 47c yesterday at Nawabshah. A sign of more heat coming into north-west/central India.

3. The south-west streamlines are very strong and appropriate below 15N, but still a b 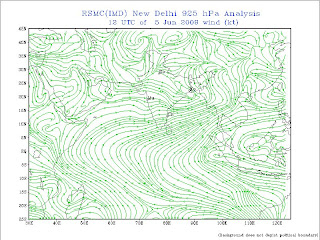 it weak above, that is north of Goa. Indicates a slow, but definite movement of the monsoon current north along the coast.

4. The much "dreaded" W.D. has moved away too far north to have any substantial effect on the

proress of the monsoon.The 500hpa map shows this clearly.

5. After all this if we see nothing, Then all I can say is: "Its the Vagaries of The Weather" !!

Today, the feeble low in the north bay is half inland (into W.Bengal) and half over the sea (seen in the streamlines). The low, at most is an indication or "helping hand" for the monsoon to move a little northwards.
Why "little" northwards ? Because, I do not see the monsoon moving far beyond Mumbai, in the next 5 days from today.

No concrete signs of the monsoon getting a good push into Gujarat before 11th. are seen.
As mentioned before, the monsoon might still restrict itself to the coast of Maharashtra, (interior Karnataka can be covered by the monsoon due to the current low in the bay), and the interiors of Maharashtra may still have to wait till after the 12th. for a proper monsoon. This includes the Pune/Mahableshwar/Marathwada regions.

Mumbaiites, a couple of days more of sweltering heat !
kapadias@gmail.com