And the wait continues.

No fresh sign of any developing low or systems either side of the Indian Peninsula in the next 4 days, meaning the subdued monsoon conditions are likely to continue , as on today, till the 15th./16th. at least. (Mumbai, wait at least till 15/16, Gujarat/inland Mah. till 20th.). 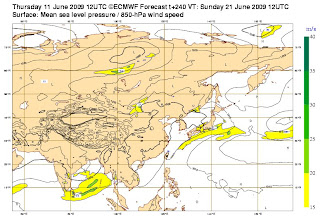 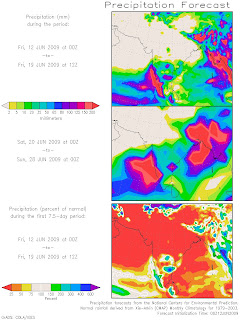 However, the ECMRWF forecasts the formation of a low, a monsoon forming low, in the bay around the 20th. of June.( Too lata, if true). The map from the ECMRWF site shows it. And the COLA map reveals it properly. Rain in forecasted week 12th.-19th, is along the southern coast, and in the subsequent week 20th. -28th, moving north into the central regions and the projected low forming along the east coast.
For the moment, minimal rainfall will be restricted to the coastal regions of Karnataka/Kerala for the next 2 days only. This is due to a weak off shore trough along this region.
Otherwise, very scattered localised thunderstorms will be prevailing in the interior Maharashtra/M.P. and northern peninsula regions next couple of days. This is mainly due to the local convection.
Thru my blogs, I am reviewing and observing the situation on a day to day basis. Today, with the monsoon stuck in a "half Monsoon " position, the synoptic situation can be very fragile, and could go in for a dramatic change, either way within 24/36 hrs. ( At very short notice !).
Another major, and unexpected, development is the forming of the El-Nino.
The waters of the central and eastern Pacific Ocean have started warming up. It seems to be heading towards the formation of El-Nino conditions within 2/3 months, according to some forecasts.
Now, I am far from being an expert on the El-Nino scene.. But I do believe that the sudden rise in sea-surface temperature anomaly occuring since the last March is--and will continue to cause the weather, and our monsoon, to behave differently than it normal pattern. Jim (Accuweather) feels this could be a reason for the "sputtering SW Monsoon?" Maybe. My thinking is that there may be a link too.
kapadias@gmail.com
By Rajesh at June 12, 2009