With the wind pattern getting more "un-monsoon" like over the sub continent, the monsoon is now sliding southwards. The winds shows a ridge in the Arabian Sea, and south -west monsoon current showing signs of dis-organisation.
To put the final stamp on the widhrawal, a W.D is forecasted by the IMD (also seen in the streamline), by the 6th. A W.D. is a typically winter system, and will push the monsoon trough down south.
In the meantime, a late partial re-strengthening of the Easterly 200hpa jet streams over 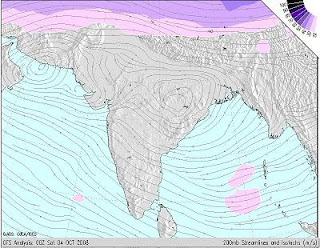 These rains are expected to cease in Gujarat and the monsoon expected to move away from the areas north of Gujarat from the 6th.
However, Konkan, Ghat stations (Lonavala & M'shwar), and Marathwada can recieve some thunder showers for another 3/4 days, maybe upto Tuesday,7th. Heavy rain at a few places in the Ghats can be expected in this period.
Subsequently, with the W.D. seen to dominate the northern areas in a couple of days, the weak easterly jet streams can change directions, and indicate a monsoon widhrawal from Maharashtra and central India from the 7th.
Next blog update 8th. October.
kapadias@gmail.com