Starting from the Arabian Sea, the much monitored low there has concentrated into a depression. It now lies over the western Arabian Sea, almost skirting the Oman/Yemen coast and the coast of Somalia. At this postion, it is not going to affect the shores of the sub-continent as the movement of the system will be north-west, on deepening further.

I now wait for the forecasted low in the bay. It is expected to form around the 24th. off the coastal regions of A.P. Like I mentioned, its direction and intensification will be dependend on the WD, which will travel across extreme north of the sub continent around the 22nd. In all likeleyhood, within this scenario, the system will move northwards. I would not forecast the future intensification and actual direction of this system now.
As a result, the rainfall pattern and intensity for the southern peninsula will continue to remain as it is, till at least the bay low surfaces. But for the next 1 week, the "normal" north-east monsoon rains will continue, in the existing pattern, as the trough line embedded in the ITCZ, running from the depression, thru a low over Sri Lanka southwards, thus remaining just below the tip of India. Todays IMD streamline shows this clearly.

With the moving away of last week's WD, the night temperatures have started falling in the northern plains. Across the border, Islamabad night temperature fell to 12c, and in India, the Punjab towns saw 15c-16c (including Delhi). The IMD map shows a large area around north/central India in the 16s.But as the fresh WD 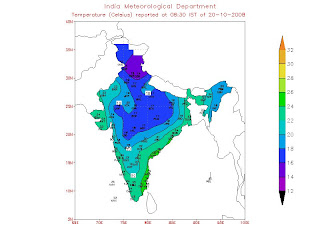 approaches, these night temperatures may rise again from the 21st.

Due to strong inland easterlies along the west coast of India, the days have been abnormally hot since the last 2/3 days. Most of the coastal towns of Maharashtra have touched 37c, almost 4-6c above normal.
Mumbai too is hot at 36.6c being recorded at Colaba, and 37c at S'Cruz. during the last few days . The heat has been "stiffling" for the Mumbaites, as it is almost touching the all time high for October, at 38c, for, Colaba, and Santa Cruz. The Mumbai heat is expected to lessen from Wednessday,22nd., as with the WD approaching, the easterlies should change to north-westerlies.
kapadias@gmail.com