Come October, and another settled and dry day all over and with the last of a weak Monsoon low fading, and the from satellite imagery showing cloudings sparsely near the India-Nepal border.

The streamline of the first day of October clearly indicates the almost total reversal of the winds in the sub continent, and, importantanly, in the Arabian Sea. The dry air penetrating over the peninsula has cleared the skies over the entire region, and resulted in a drop in the minimum temperatures over the central regions of maharashtra and M.P. (Pune at 16c and Aurangabad/Nasik at 18c ).
An over view of South Asia ( from "Thailand Met Dept" map), shows the ITCZ to have shifted to 22N over India, and runn 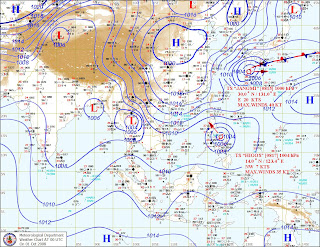 ing southwards towards the northern bay area, and then into the mid regions of Thailand. This is now expected to recede southwards fast, and move below the southern tip of India in about 15 days. That will hearld the total reversal of winds in the Indian region, and the onset of the "reverse" monsoon.
But, for the "reverse monsoon, we need a sysytem in the bay !
Another 5 days ahead, is another predicted low in the bay, a follow through from Tropical Storm Mekkhala, which has landed in Vietnam as of Tuesday. Numerical forecasts have been showing only a weak reflection of a low, owing at least partly to the moisture lacking northerly winds .
A weak, late-season spell of monsoon rains is forecast the coming weekend over peninsular India. This would favor local rain westward from interior Maharashtra with scattered thunderstorms elsewhere in north Karnatak nad south M.P.
Hence, the actual widthdrawal, below Gujarat, may be delayed by the IMD till this spell of rain fades away.
kapadias@gmail.com
I shall put up my next update on 4th. October.

It is now expected that the night temperatures will start dropping in the northern states, Rajasthan, M.P. Gujarat and Maharashtra in the next week. But, the days are expected to remain warm all over this region for the next 15 days at least.