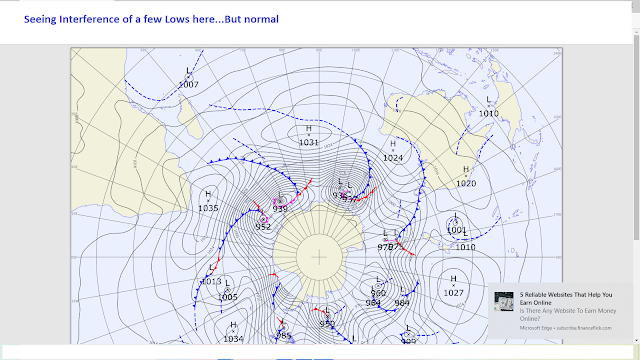 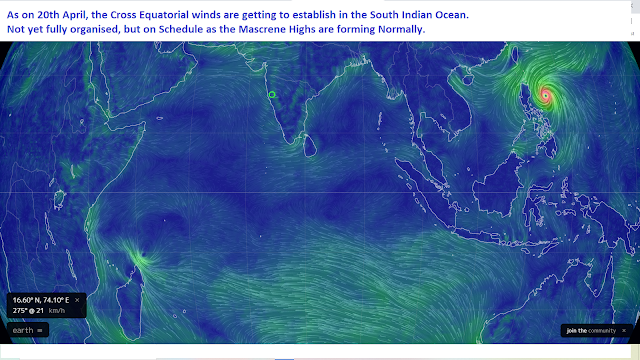 Indicator: Normal.
2. Seasonal Low
Core between 1006/1008 mb...Bit slow..but no problem..As mentioned, by end May/early June it normally should reach a low nadir of 994 mb in June in the Thar Desert, and with 1008mb in the South Arabian Sea, a perfect gradient is created to attract the south -west winds towards the coast.

The Line of Wind Discontinuity should normally stabilise around Central India perpendicular down into the Southern Peninsula by mid April.
Weak now today.
Indicator: Normal.
3. ENSO;
he El Niño–Southern Oscillation (ENSO) is neutral, and with no sign of El Niño or La Niña developing, the ENSO Outlook is INACTIVE.
As explained before..La Nada.
Indicator: Neutral.
4. Bay Low:
4. The Bay has yet to host a pre monsoon low during  April. As discussed, we should normally see a low sometime after the 15th of April.
Another factor, which helps the winds gain strength, and bring more moisture into the Indian landmass, is the sea temperatures on both sides of the Peninsula.

No Low seen till Month End.
Indicator: _ve
Overall Summery: 3parametres Normal/Ok...1 Negative.
But, situations can change fast, and by the time we discuss the next MW, some factors can suddenly become +ve or -ve. So, MW discusses and follows the developments as they emerge, and discuss the parameters as is where is.
No model can commit  today when the Monsoon can arrive. Quantum of rain forecasting in April for June right through September is an impossible task. Things get clearer by last week of April. Vagaries' (in MW) normally remains true to estimates around early May.
By Rajesh at April 20, 2021

Thanks a lot for keeping a tab on parameters as regularly done every year and updating all of us at vagaries on latets developments.

Thank You Rajesh sir for your short but very informative moonson watch write up.

Thanks a lot sir.

Pre monsoon and monsoon from June to October is the time of excitement in our country.

Thanks Rajesh for a crisp but informative update. Good read,

Thanks a lot sir👍

Hope you are safe and Healthy.
When will pre-monsoon rain start in Mumbai.
We do not get pre-monsoon showers the way kerala/ karnataka / interior Maharashtra receives.