These reports are my personal views, study and observations. Estimates and forecasts are also my own calculations and views, and may/may not tally with any other estimates. This may not be used for commercial purposes. The author is not responsible for any commercial loss from this article, or this series of articles.
The Monsoon developments, as they unfold, will be analysed and discussed and explained in Vagaries.
The South West Monsoon is just about 35 days away from its normal date of arrival from the shores of India ! Yes ! its just 35 days from the First touch of shores...Southern most point of India on the South Andaman Islands, Indira Point, where the normal arrival date is 15th May.And its about time we start the follow up of its progress and monitor its developments.
The Sub-Continent is eagerly awaiting its share of 2021 monsoon rains !
This annual series is a follow up and chasing of the South-West Monsoon.
Every article in this series explains the synoptic situation as it actually is, and based on the day's position, the date and quantum of rains as on THIS SITUATION.
It is very important to firstly estimate the date of arrival of the South West Monsoon, as year to year, variations in dates of onset of the monsoon can occur and there have been several occasions in the past when the monsoon arrived over certain parts of the country about a fortnight earlier or later than the normal dates. The SWM has the  weatherman tearing at his hair for the exact date or time, extent and progress. This is never 100 per cent sure though various weather models are used to calculate this event.
Initially, in the first few parts, of this series will be chasing and closely following up the actual developments of the monsoon parameters, and analysing its progress regionally for calculating and estimating the arrival date. We are not yet contemplating the quantum of rains or the monsoon strength as yet.
There are 2 parts to this article:A)-This is the Ideal Conditions  During SWM Onset in Early June.

B)below indicates the actual situation of the parameters situation today ( 10th April).
A)Very very briefly, let  us first understand, that the "power house" of our SWM is actually based far away in the southern Hemisphere. The main "generating factory" is the Mascarene Highs, between SE of the Madagascar coast and Australia. The SWM is born down South, 4000 kms from the Indian Mainland !The proper formation of these "High" regions,(1032/1034 mb at least) will boost and create proper South East winds to lash the East African Coast near the Equator, and then turn perpendicular to South West in the Northern Hemisphere. And the formation of the "Tibetan High" is another factor. An anti-cyclone in the upper atmosphere over the Tibetan Plateau. During the formation stages, there will be thunderstorm activity in the SE parts of Tibet during the months of April and May.
To generate a powerful SW wind, the cross equatorial flow must be strong and gusty. SW winds (ultimately upto 600 mb levels) then are capable of riding on the warmer Arabian Sea waters (Arabian Sea Branch of SWM) and bring cloud masses towards the West Coast of India. In the Bay, similar SW winds are generated (Bay branch of SWM), but from SE winds below the equator, just below Sri Lanka.
And to attract the SW winds, again, we need a good proper "seasonal low" to develop in the Sub-Continent. This seasonal low, normally should start forming around Barmer, Rajasthan, by mid April, and at its peak stretch upto Arabia. Seasonal low at its peak, in early June, should normally be around 994 mb, and the ridge around Kerala should be 1008/1010 mb. This enables a good gradient to pull the SWM Northwards along the coast and inland.
B)-In this initial stage, we will observe the basic root and foundation, the initial 4 parameters only, and the initial seed of the monsoon. From these parameters, later a few more develop.1. Cross Equatorial Winds from Southern Hemisphere. -ve 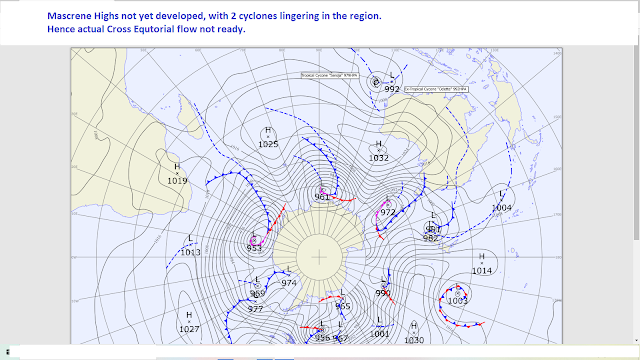 2. Seasonal Low over India/Pakistan. :Indicator: Normal for this time. 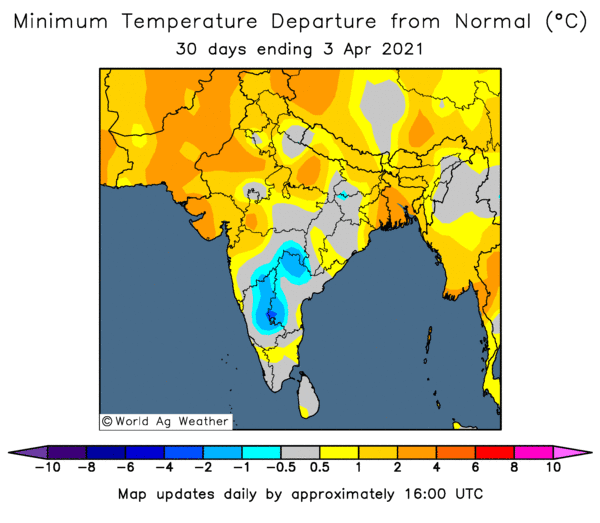 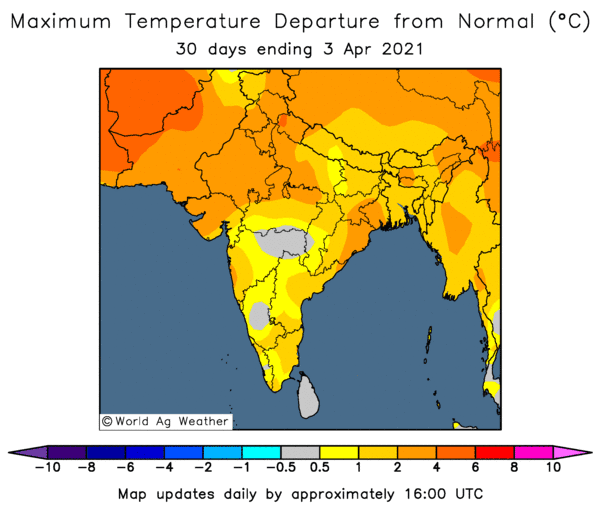 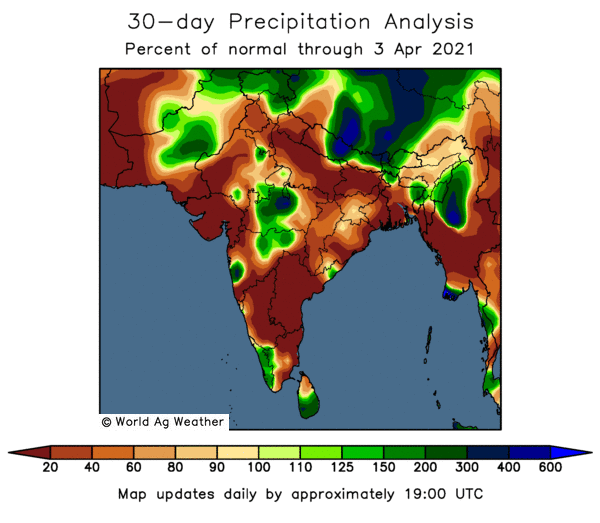 The current Line of Wind Discontinuity from Vidharbh to Interior T.N. should stabilise from around Central India perpendicular down into the Southern Peninsula. This enhances the speed of the Seasonal Low formation. Normally is required to start taking shape for the monsoon by the second week of April.
3. ENSO Status.: Weakening La Nina and in La Nada state Now.

Indicator: Normal Monsoon Expected ,except West Coast could  be above normal.

4. Pre Monsoon Low in the Bay.

Not expected till 20th April.

Summary: Tilted towards the normal, as of 10th April. Parameters analysed as of now show normal progress for Monsoon Advance on time.

New Readers, please note, These initial Parameters are normally (every year) considered in MW Series to gauge and estimate the arrival date of SWM, not strength. Time of arrival normally indicated in MW-3, and strength after 29th April. There are more parameters are to be considered, as and when they are developed and to be taken into consideration.MW-2 on 22nd.April.

👍🏼👌🏼 Sir wonderful to have your views as we have been getting regularly every year every swm seaosn.👌🏼👍🏼. As you promised Truncated and abridged MW is published for benefit of readers for a major event unfolding SWM 2021. Am sure many weather enthusiasts are following religiously your MW series regulary and every year.

Thankyou sir for the most awaited monsoon watch series with deep insights of the status of all vital parameters governing monsoon.

Thanks for publishing your thoughts sir.

Thank you Rajesh sir for this monsoon watch write up.