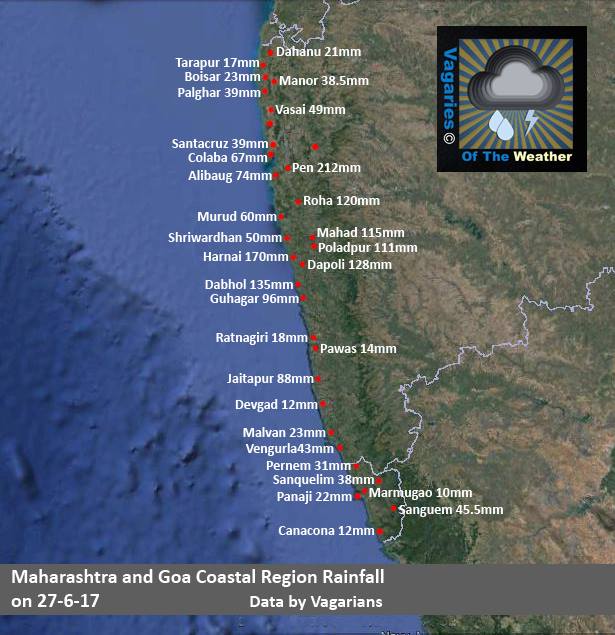 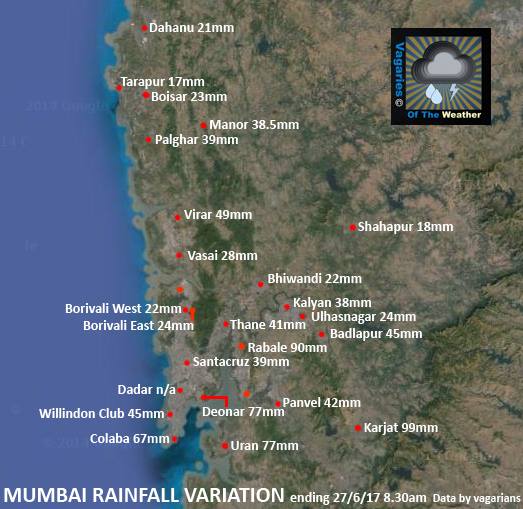 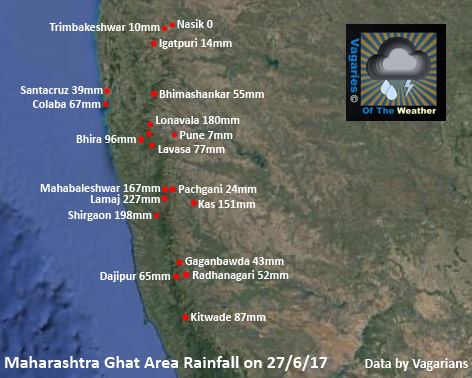 Mumbai: Monday 26th,Tuesday 27th and Wednesday 28th will see frequent showers, some heavy. Regular monsoonish weather will amount to around 50-55 mms of rain per day.
Eastern outer townships may see a slight reduction in rains from what was experienced on Saturday night.
Northern outer townships will get fairly heavy showers.
Panvel and Roha regions will also get frequent heavy showers, next 3 days, averaging around 50-60 mms per day.

Delhi NCR will be hot on Monday and Tuesday. Good increasing rains from Tuesday night thru Wednesday. 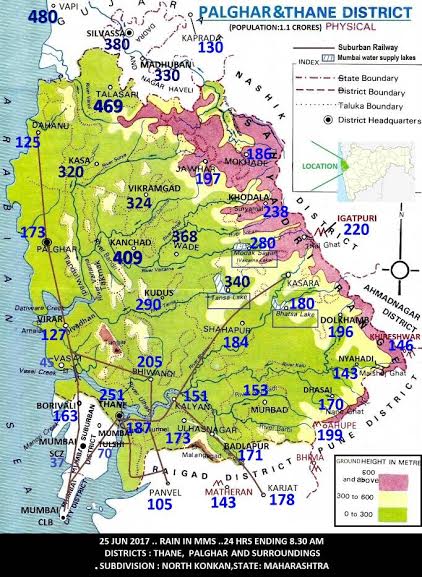 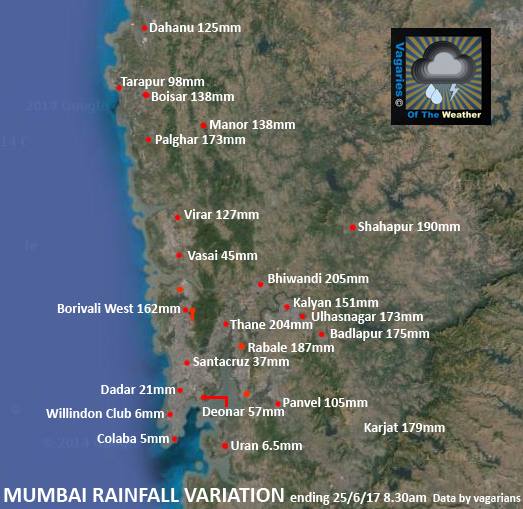 Arjun: Do you have your own measurements of rain ? Or is the figure taken from some source ?

No sir, I took it from a source and that source took from the BMC rain site

sir nothing for us? sindh?

Gives rainfall figures in last 15 minutes.
Select the station from the drop down menu

It's by MCGM disaster management system

Rajesh sir,The UAC which was near south gujarat coast giving rains to North konkan and mumbai has gone far away from the coast...Do you see a sharp reduction or break in rains over west coast...or any increase after some days..????

@Nilay, there's an Android app also for the same. Quite useful for many stations.

@ Avtansh Thanks bro for inviting attention

over 80mm rains in some parts of Mumbai again since last night.

Though we have a good number of responses from Mumbai, I try to cover the regions from where i get good response and feedback.

Among west coast Harnai seems to be leading (overtaken KAR Augmbe).
Somehow I feel increase in MAHARASHTRA rains over last few years has led to decrease in rains over KARNATAKA and KERALA. 2016 after june monsoon suddenly vanished from south west coast - this time we need to watch- all hopes on Cauvery glory. It may be possible due to loss of giant trees over KAR/KER to some extent apart from change in climate/weather pattern.

OK..thankyou... Rajesh sir... Keep mentioning my place in your forecasts in future.

SATISH SHETTY [SSET]: YOUR VIEWS on the deforestation in Lavasa project. Hope you are aware that vidarba farmers face acute water scarcity.

It is unusual 2016 june was bit sluggish but 2017 june is roaring for MAHA! Mahabaleshwar also seems to have woken up early for daily 3 digit figures in stiff competition with classical Harnai (naughty place with annual mean of 2000mm has last year received 7000mm).

Sir what will be forecaste for Thursday and for weekend

When will we get respite from non-stop Navi Mumbai side in pounding - vagaries forecast for heavy rains over Panvel is less....

This looks to me similar to 2015 june low pressure on both sides AS/Bay gave extreme rains to MAHA and GUJ in june itself. Many places in GUJ received annual rain quota in single day itself!

@sset : It is unfair that you staying in Navi Mumbai are taking all the rains meant for South India. Please stop this immediately and send the rains back there. Please do it right away.

No suresh I meant only good for all states. Few days back I had been to BANG - no rain only
30 mm since june all interiors are dry except few days of pre-monsoon showers. So contrasting between torrential Mumbai and places which are still wait for rains....Guess when u realize difference it impacts.

@sset Thanks for your return comment. My only point to you is that all of us want good rains across the country. I myself am from South and know the difficulties which people face there. But then to repeatedly keep comparing rains in West versus south is irritating. And then when you make comments like Mumbai bloggers must visit South to understand the difficulty is even more irritating. Do you visit Vidharba yourself to understand the water scarcity ? Not possible, right ? I live in Mumbai, enjoy the monsoon here to the fullest extent but at the same time do not blame it for water scarcity across so many parts of India. My sympathy lies with them and am sure many other bloggers here share this unlike what you think. So please refrain from repeated references to South again and again. There are other forums available to do so in case you still insist. Remember Rajesh has rightly named this Vagaries of Weather. Try to enjoy it.

Dear Sset, we can just hope for widespread and torrential rains across country. Ofcourse after whatsoever predictions, the matter is finally upto Rain Gods. Every year in the country we desire more rains than average so that we can sustain this huge population and economy. Hope this desire gets fulfilled every single time. Also, to add hope 2017 monsoon only takes cue for the month of June from 2015 monsoon and not the remaining three months. Coz in 2015 remaining three months were way below average. The buck should stop in June itself and for the country overall we get bountiful rains in the next 3 months.

@SSET
We have had this discussion many times before before. Let me try once more. I hope you share your opinion.

I do not see any thing surprising here. Mangalore(Karnataka) is twice Mumbai(Maharashtra)

Refer to http://www.cpc.ncep.noaa.gov/products/global_monitoring/precipitation/sindia_30prec.shtml to see the rainfall figures.

Tommorow again if it rains heavy in mumbai
SSET comments will come up....

1. Non-stop torrential rains .
2.roaring warerfalls
3.lush green hills ...etc ..sometimes i keep thinking if u had to live in cherapunji ...i swear God knows what type of comments we would have read in this blog...