Currently, strong El Niño persists
According to researchers from the National Oceanic and Atmospheric Administration, water temperatures in the Niño3.4 region of the tropical Pacific—an area that is usually the focal point of such events—broke a record in December 2015. Sea surface temperatures averaged 2.38° Celsius above the norm, surpassing December 1997, which was 2.24°C above normal.For October through December 2015, the three-month temperature average for the Niño3.4 region was equal to the record high from the same months in 1997. 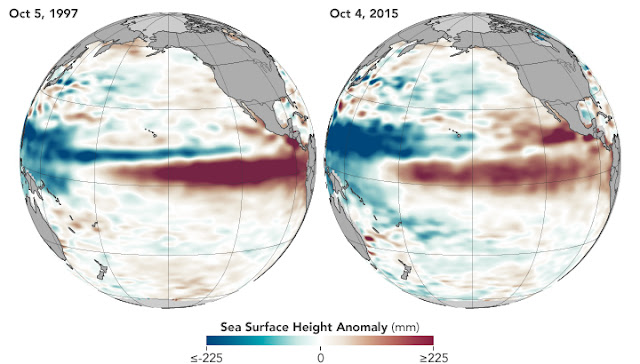 Climate models suggest El Niño will decay over the coming months, with a likely return to neutral conditions in the second quarter of 2016.Warmer-than-average waters in the eastern tropical Pacific Ocean should start to cool off and shift westward.
Based on the 26 El Niño events since 1900, around 50% have been followed by a neutral year, and 40% have been followed by La Niña. Models also suggest neutral and La Niña states are about equally likely for the second half of 2016, with a repeat El Niño the least likely outcome.
But will the ocean respond in 2016 the way it did in 1998 and 1983? There are no guarantees.

However, recent tropical cyclone activity in the central tropical Pacific has produced strong westerly winds along the equator which may temporarily slow the decline of El Niño. Such short-term re-intensification of El Niño has happened before. For example, 1997–98 saw a re-strengthening of El Niño conditions in early 1998, before the event eventually decayed.

Vagaries' very early estimates see a ENSO neutral condition in the April/May/June  period. On this schedule, We may see a sluggish start to our South West Monsoon in June. As La Nina could develop, Monsoon can recover after mid July and possible extend into October 2016. These are very early presumed estimates, depending on the developments.

The maps below show conditions in the middle of each of the past 13 months as El Niño has developed. 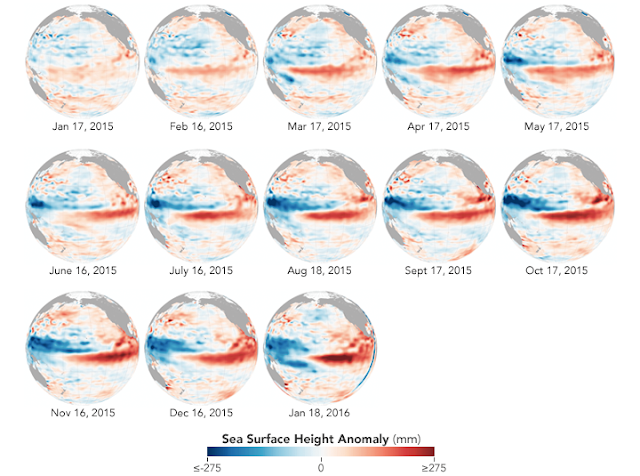 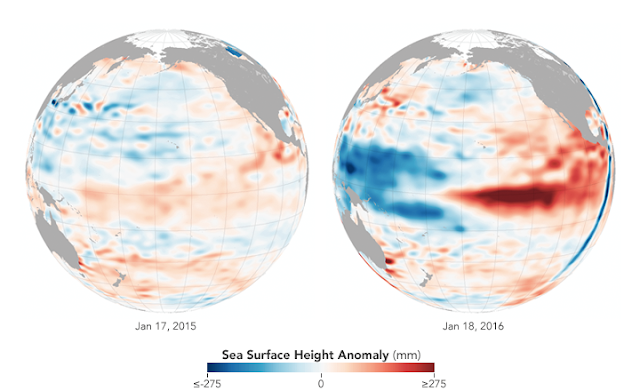 The measurements come from the altimeter on the Jason-2 satellite and show averaged sea surface height anomalies. Shades of red indicate where the ocean stood higher than the normal sea level; warmer water expands to fill more volume. Shades of blue show where sea level and temperatures were lower than average (water contraction). Normal sea-level conditions appear in white.

“It has been another ‘event of the century’ much like the one we just had in 97–98. The question is: how quickly will we flip into La Niña?”

Excerpts from NASA Earth Observatory and Australian Bur of Met.

Sea surface temperature shown some cooldown during december but it's again rise strongly during January then how can we assume elnino to turn into neutral during next half of 2016?

Very well presented, very easy to understand with help of figures the other wise very difficult to digest the event El aNiño.Thanks for such a lovely write up.

gaurav raninga: Your statement that SST has shown some cooldown in December and rising again strongly in Jan is absolutely contrary and opposite of the statement made in this very article.
I have stated ..Quote:- "...broke a record in December 2015. Sea surface temperatures averaged 2.38° Celsius above the norm, surpassing December 1997, which was 2.24°C above normal.For October through December 2015, the three-month temperature average for the Niño3.4 region was equal to the record high" and
"Vagaries' very early estimates see a ENSO neutral condition in the April/May/June period."
My views show a Neutral conditions in the Apr/May/Jun period.
Hence, your query cannot find an answer with ref to my article.

On a side note, I just noticed that Bhira recorded a maximum of 40C for yesterday. Couldn't quite believe my eyes. This is still January, for crying out loud. I've noticed Bhira having a higher temperature than the surrounding areas fairly often. Is there something in that place that lends itself to higher temperatures outside of the monsoon period?

Evewrest: Frankly, i do not trust the Bhira readings. Not now, but since the last few years, i am seeing Bhira give "faulty" and unreasonable maximum and minimum temperatures.Maybe wrong exposure or damaged screen.
I do not consider the Bhira readings seriously or as true.

Rajesh sir I consider sst of december only as shown in map as light red colour...and for November and January map it showing dark red...so i think sst for January is higher than December. ..if it doesn't have importance in terms of elnino then it's ok....