As we move into April, we are alert, and start observing the "Monsoon Build up" parameters. Starting from the Mascrene High formation and cyclones activity in the Southern Indian Ocean to the Peninsula trough and "pre- monsoon" lows in the Bay, the ICTZ movement and to the heating up in the NW regions of the Sub-Continent. 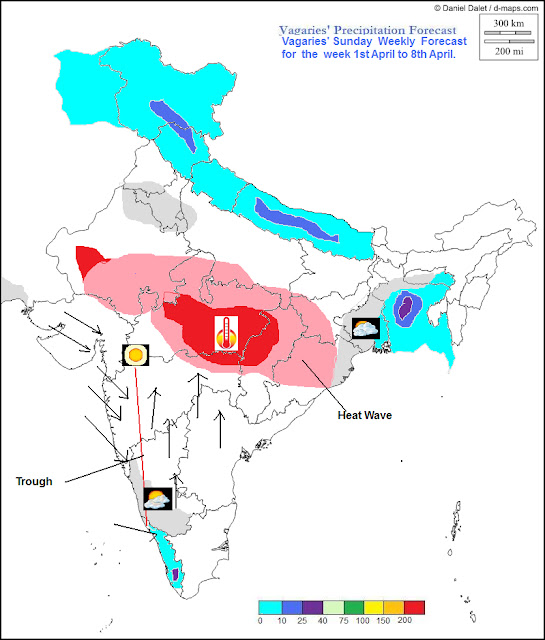 1. Important this week will be the N/S trough line as it starts showing signs of forming. A N/S trough, or a "line of Wind dis-contiunity", is a trough which has winds moving in the opposite direction on either side of the line. In this case, a perfect line of wind dis-contiunity will be formed when the winds will be from the N in the West of the line, and S in the eastern side. By mid April, the line should be seasonal. and located approximately in the central region of the Southern Peninsula.
As the week starts, the trough will be haphazard, and will be somewhere along the Western Mah/coastal Karnataka line. That is, more towards the West than normal. But during the 2nd half of the week, the line may move Eastwards, and start stabilising its position, though still weak.

2. Resultantly, there will be clouds developing, and bringing afternoon showers (read Summer showers) to Kerala, being in the Southern tip region of the trough. The meeting of winds can bring about good convection and start initial Summer precipitations.

3. M-7 is precipitating light rains in Northern Pakistan on the 31st, Saturday. Moving into India by Sunday, 1st April, and leaving clear weather in its rear, M-7 will precipitate rains, though weak, in Kashmir, H.P. and move into Western Nepal. Moisture will linger on in Nepal for 3/4 days into the week.

4. Strong NW winds have kept the day temperatures within reasonable limits along the West Coast of India, and in fact have brought the days to the below normal conditions in N.Konkan. Mumbai had a high of 31c on Saturday.

But the heat is creeping in from the NW of the Sub-Continent as seen in this IMD map. Heat wave temperatures were recorded in Upper Sindh (Pakistan) and adjoining Rajasthan on Saturday.
In Pakistan highest temperatures were Mitthi 43 °C, Jaccobabad ,Hyderabad and Nawabshah 42 °C while in India Jaisalmer was at 42c.
Heat wave will abate from the region after Monday. However, heat wave will prevail over Central and Eastern India mainly this week.

5. A vortex in the upper air forms over Bangladesh by Thursday, and could bring some heavy rains with squalls in some pockets of the Central regions of Bangladesh on Thursday,5th/Friday,6th.

6. It's going to be almost a cloudy week for Dubai and Muscat. Light rains expected in both cities on Wednesday,4th. In fact,Thursday will be almost overcast.
Muscat will start getting cloudy from Tuesday or Wednesday, and can expect some light rains on Wednesday /Thursday. Days will be cooler as a result.

Delhi: Come Saturday and the capital has moved into the "36c" range, as mentioned in the last weekly forecast. S'Jung was 36.5c and Palam 38c on Saturday.
Sunday/Monday/Tuesday: Partly cloudy, with light drizzles on Monday night/Tuesday. With moderately strong SE winds, the days will be marginally rising to the 37/39c levels. A bit of moisture may make it more uncomfortable, as the "real Feel" temperature will be around 39c.
Wed/Thurs/Friday: Return of N winds will lower the days to 36c levels again. And humidity going down, it will be much more bearable in the latter half of the week.

Mumbai: Saturday was 31c.
Sunday/Monday: The day will be slightly warmer than Saturday, maybe reaching 33/34c.
Tuesday/Wed/Thursday: Will see the days falling back to 31/32c as N/NW winds will dominate.
However, with humidity levels showing no signs of going "out of limits", (may remain at a high of 75% and minimum at 40%) this week, the comfort factor even with 32c and 33c may be "still ok" by Mumbai standards.  The positve signs will be the lows, which will remain below the 25c mark most of the week.(It could rise after mid April).

Pune: Week will be dry, with the days warm at around 38c and nights showing a fall to 18/19c throughout the week.
Monday/Tuesday may be partly cloudy, and result in the nights going up marginally to around 20c.


Nagpur: With the heat gradually rising, we can expect the "hot city" to reach 42/43c by Wednesday. Convection can happen by mid week, as S winds bring in moisture. Expect thundershowers on Thursday.Nights expected to rise to 26c by mid week.


Kathmandu: M-7 precipitation may bring thunder showers to the capital from Tuesday. Persistant moisture through the week will produce the odd thundershower till Saturday next. Resultantly, very pleasant weather will rule the week, as the days will remain in the 29/30c range, and nights around 12/13c.

Karachi: Partly cloudy weather will rule most of the week. Winds will be W/NW, and with clouds in the sky, day temperatures may drop slightly from the present 37c levels, maybe by 2/3c. But, humidity increasing is going to affect the comfort levels and the real feel temperatures.
Sukkur: Remains cloudy till Monday. But, Tuesday onwards it should be clear skies and hot temperatures. Though Sukkur touched 40c on Saturday, beyond Sunday, I do not expect an unusual heat wave in the region this week.

waiting eagerly for your monsoon forecast on 1st april... :)

Ron:Monsoon Watch is published from 10th April onwards every year. This year too it will commence on date.
though parameters are developing, I am analysing and grouping them now.

Feedback mail from Neeraj (Kathmandu):"Changeable weather. and thunderstorms now. Yesterday there was quite a
thunderstorm in the evening (though it was more thunder and storm
compared to rain). today also, thunderstorm is forecast. in fact this
whole week there's a chance of thunderstorm. lets see how things pan
out. and temperature wise, its 10 C ~ 30 C range. fresh and cool in
the mornings and late evenings and quite hot during the day. spring
weather.

will keep you posted if anything new develops. also will be looking
forward to you expert view".

KK mails from Delhi: "Delhi has already touched 38c as put up by you..hot and humid here !"

oh sry my bad..thought it was 1st..anyways...looking forward to it...