Current Cold Spell in NW and North India  is not Unusual...Much is said about it this year to make it sound "some rare event".

The cold wave in North India a normal phenomenon and occurs multiple times every year during December and January. Cold wave conditions develop generally after the passage of a strong western disturbance, which is followed by icy cold north-westerly winds over the Indo-Gangetic plains including Delhi.

Now, what is this "Western Disturbance " (WD)?

In Meteorological terms  it is a "Cold Front"..Which means a mass of very cold air,being denser and "heavier", pushes a prevailing lesser cold air upwards. In short. a thick mass of cold air creeps in under a lighter mass of less colder air. This rising warmer air condenses to clouds and bring precipitation.

On the passing of a WD ,( from West to East), cold north-westerly winds blow into Northwest and Central India. Minimum temperatures decreases sharply.

[In the recent decades, there is a clear increasing trend in the minimum temperatures over north India, and the number of cold spells is decreasing. In fact 2021, was the warmest January for India after 1958. Similarly, December 2022, was the warmest December for the country in the recorded history (since 1901) with average temperature 1°C above normal. Thus, there is no evidence to show that cold waves are increasing in north India.]

This winter season we have seen low temperatures like 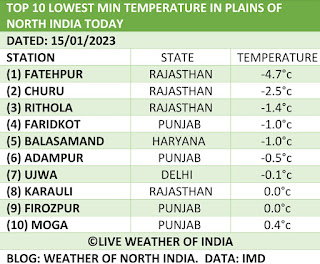 The current cold wave spell will be at its peak on 17 January. As per the IMD-GFS forecast, Delhi (Safdarjung) could see temperature falling to 2°C.

Parts of Haryana, north Rajasthan such as Churu, Mount Abu, Hissar, Sirsa can see freezing temperatures in the range -1 to -2°C.

Further, due to the prevailing windy conditions fog, dense fog is unlikely over Delhi NCR on 16-17 January.

After 19 January, the minimum temperatures will once again start rising over entire Punjab, Haryana Delhi, NCR West UP region leading to abatement of cold wave conditions.