Mumbai: The last 3 days of the Navratri celebrations...and how is the weather going to play along ?

This week ( 3rd Monday to 6th Thursday), Mumbai will see partly cloudy skies. But a few moderate (and sharp intense) thundershowers are likely. Rainfall around 10-25 mms/day  variation expected. Occurrence of the showers would be in localised in different areas of city. Possibility of an evening shower on Dussehra holds good.

Pune: also can see some light to moderate showers in the late afternoons. expected rainfall in parts of city around 5-10 mms.

For both cities, we hold on the further Forecast, as a dim chance of rain continuing into weekend holds good.

Marathwada & Vidharbh will get light to moderate rainfall this week 3rd onwards. Around 10 mms/day. Few places rain may exceed 20-30 mms/day from 5th Wednesday

Farmers are advised to cover the crops if already cut and removed for storage. As wet conditions may spoil the cut crops.

BB-14 moving towards the UAC, and could merge as explained earlier. 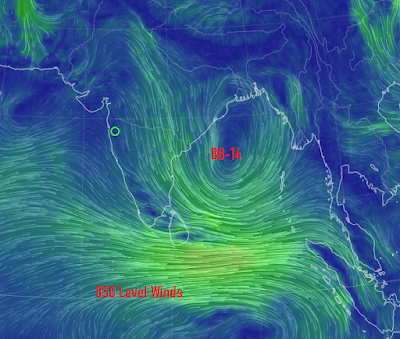 But, its further movement after crossing the A.P./Odisha coast should be NW.

Interacting with W.D, there will be  some rains in Central India, Bihar, U.P. Uttarakhand (East)and .Affecting upto Nepal..

We expect possibly some post Monsoon showers in Delhi this weekend.

Keeping in mind the above scenario, we hold on to the withdrawal line for a few more days.