As Cyclone Asani weakens and dissipates, the focus shifts to our Southwest Monsoon!

Cyclone Asani in the Bay of Bengal has proved to be helpful for the monsoon westerlies in ways summarized below:

1) The High Pressure Area/anticyclone in the Bay of Bengal is no more. Cyclone Asani has opened the gates for strong westerlies/south-westerlies from the equatorial Indian Ocean to reach Andaman and Nicobar islands, so expecting the monsoon currents to get organized in the Bay branch soon (see the surface and 850 hPa winds below) 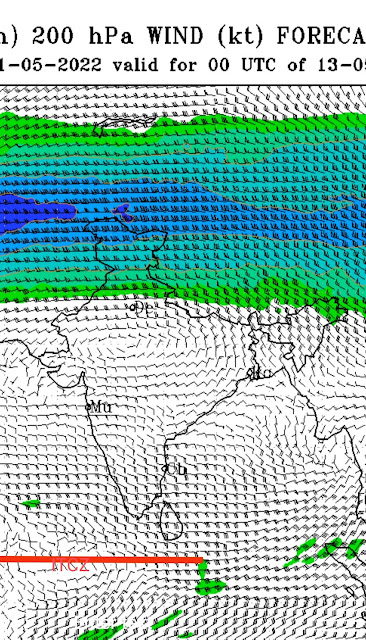 Expecting the Southwest Monsoon to reach south Andaman and Nicobar islands around 15th May!

3) Westerlies from the Arabian Sea have strengthened due to the pull effect from cyclone Asani. So no heatwave for interior konkan. Rise in humidity and increasing cumulus clouds along the west coast. The high pressure region (anticyclone) in western Arabian Sea has also weakened, thus allowing stronger flow of westerlies over the west coast and Ghats.

With westerlies at surface and low levels are strengthening,  passing showers (pre-monsoon) likely along south Karnataka and Kerala coasts in the coming days.

Good rains from pull-effect westerlies due to cyclone Asani were observed over Kerala and south coastal Karnataka as indicated in our earlier post below.

4) The Seasonal Low is expected to deepen real fast, and could measure 994 mb in a week.

5) The Somali jet in the Arabian Sea is however not yet developed (normal for this time) but winds at 850 hPa close to Somalia are showing signs of strengthening, and should organize more in the coming days.

Expect SWM in Kerala by 30th May.