Weather for Marathwada Farmers: Marthwada and Aurangabad District will get medium heavy showers/thundershowers in many parts of the district. This will be there for next 3 days. Around 10-25 millimetres rain expected per day. This rainfall is now needed, and will not be too heavy.

Jalgaon: some showers next 3 days around 15 millimeters per day. 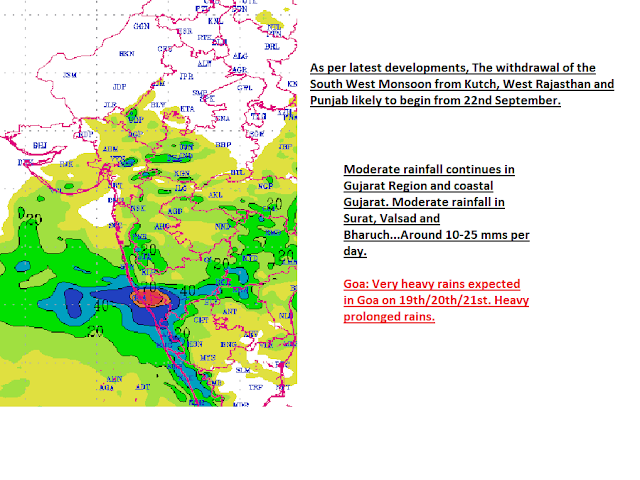 Next 3 days : 19th/20th/21st:
Mumbai: Monsoon hangs on in Mumbai till end September (at least)..What's in for the weekend...19th/20th/21st...considerably Cloudy weather with chances of a few showers. Locally heavy possible.No major or disruptive rains.

Kolkata: Increase in showers to some extent on Sunday 20th..

Can you please share the dam water storage details for Mumbai and Maharashtra as you shared for Gujrat?

Historic rains happening in Coastal karnataka especially Udupi district (which is the wettest district in South India in avg annual rainfall). Most places close to coast >20cm and many places between 30 and 50cm and one place 54cm in 24hours. Udupi town rarely floods due to good drainage but it has flooded after 40 years or so! Monsoon this year has been merciless in south India with normal to excess rains everywhere! NI Karnataka -> excess, Rayalseema--> excess.

One of the greatest monsoon for Karachi (y)

correct this is first spell of extreme rains for coastal KAR - much awaited and required.
Mumbai/GUJ style rains !