These reports are the views, study and observations of Vagaries. Estimates and forecasts are also the calculation of Vagaries, and may/may not tally with any other estimates. This may not be used for commercial purposes. Vagaries of Weather is not responsible for any commercial loss from this article, or these series of articles.

Last year the monsoon arrived late but gave above average rains over many parts of the country , specially west India.

As the Sub-Continent is eagerly awaiting its share of 2020 monsoon rains ..

Here is a quick glance at the monsoon 2019 rains(in mms)over major cities of India.. 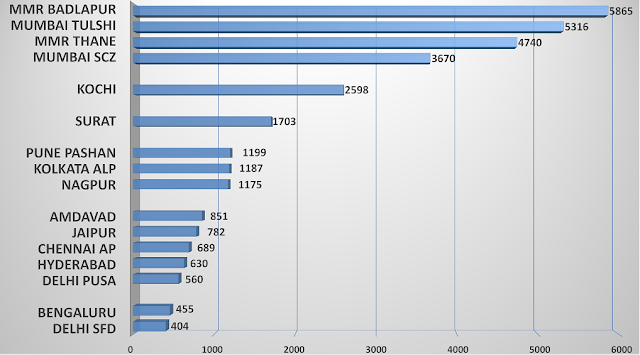 The all India monsoon 2019 topper was Lamaj village of Mahabaleshwar taluka in the Maharashtra Sahyadris (western ghats) , reporting around 11,000 mms of rains..

➤This annual series is a follow up and chasing of the South-West Monsoon.

Every article in this series explains the synoptic situation as it actually is, and based on the day's position, the date and quantum of rains as per THIS SITUATION.

It is very important to firstly estimate the date of arrival of the South West Monsoon, as year to year, variations in dates of onset of the monsoon can occur and there have been several occasions in the past when the monsoon arrived over certain parts of the country about a fortnight earlier or later than the normal dates. The SWM has the weatherman tearing😒at his hair for the exact date or time, extent and progress. This is never 100 per cent sure though various weather national / international models are used to calculate this event.

Initially, this series will be chasing and closely following up the actual developments of the monsoon parameters, and analysing its progress for calculating and estimating the arrival date.
We are not yet contemplating the quantum of rains or the monsoon strength as yet.

There are two parts to this article..

A) Explanation of the Ideal conditions during SWM Onset in early June.

and
B) Discussion on the actual situation of the considered parameters today (9th April 2020).

i) Very very briefly, let  us first understand, that the "power house" of our SWM is actually based far away in the southern Hemisphere. The main "generating factory" is the Mascarene Highs, between SE of the Madagascar coast and Australia. The SWM is born down South, 4000 kms from the Indian Mainland !
The proper formation of these "High" regions,(1032/1034 mb at least) will boost and create proper South East winds to lash the East African Coast near the Equator, and then turn perpendicular to South West in the Northern Hemisphere.

ii) The formation of the "Tibetan High" is another factor. An anti-cyclone in the upper atmosphere over the Tibetan Plateau. During the formation stages, there will be thunderstorm activity in the SE parts of Tibet during the months of April and May.

iii) To generate a powerful SW wind, the cross equatorial flow must be strong and gusty. SW winds (ultimately upto 600 mb levels) then are capable of riding on the warmer Arabian Sea waters (Arabian Sea Branch of SWM) and bring cloud masses towards the West Coast of India. In the Bay of Bengal, similar SW winds are generated (Bay branch of SWM), but from SE winds below the equator, just below Sri Lanka.

iv) And to attract the SW winds, again, we need a good proper "seasonal low" to develop over the Indian sub-Continent. This seasonal low, normally should start forming around Barmer, Rajasthan, by mid April, and at its peak stretch upto Arabia. Seasonal low at its peak, in early June, should normally be around 994 mb, and the ridge around Kerala should be 1008/1010 mb. This enables a good gradient to pull the SWM Northwards along the coast and inland.

B) Actual situation as of now

Position today:1. Cross Equatorial Winds and Mascarene high :The Mascarene Highs are the main "Power House" of the South -West Monsoons. This generates the South -East winds, which after gaining strength, cross the equator and become south west. For a proper High to form in the South Indian Ocean, the cyclone season (Low pressures) should completely die down from that region.

Mascarene high of 1036 mb is seen in the south Indian ocean between Madagascar and Australia.

Cross Equatorial Winds should start forming, and taking shape from mid -April, especially in the South Indian ocean region.
Initial forming of SE winds off the East African Coast has started from below the equator. 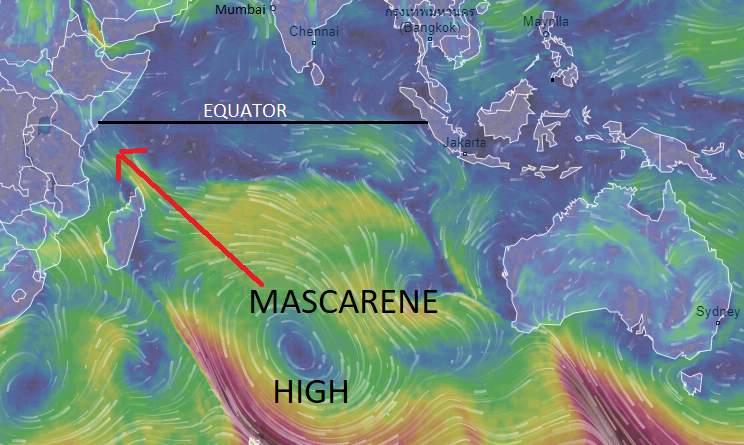 The thunderstorms over East / North East India, Central India , South Pensinsula are normal for this time of the year . 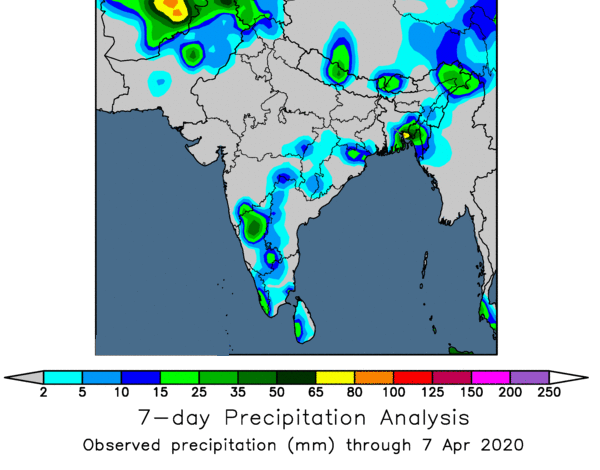 In Bengal/Odisha , the pre-monsoon (summer) thunderstorms are called Kalbaisakhis . Wind discontinuities/confluences occur from Chhota Nagpur plateau (Jharkhand) to Chattisgarh/Odisha/West Bengal and may also occur eastwards to Assam and Meghalaya. Majority of the Kalbaisakhis originate from the Chhota Nagpur plateau (Jharkhand) and move south east. Some of the thunderstorms may originate from the sub-montane districts to the North and move South. So, it would be normal for this time , if a trough runs from Sikkim through to the Bay of Bengal.But generally the thunderstorms do not move more than 160 kms into the Bay .The trough will be short lived and dissipates.

Line of Wind Discontinuity (LWD) should stabilise around Central India perpendicular down into the Southern Peninsula. This enhances the speed of the Seasonal Low formation. Normally is required to start taking shape for the monsoon in April. LWD causes summer thunderstorms (and occasional relief from the summer heat) over the peninsula.

LWD observed over the peninsula on 9 April 2020 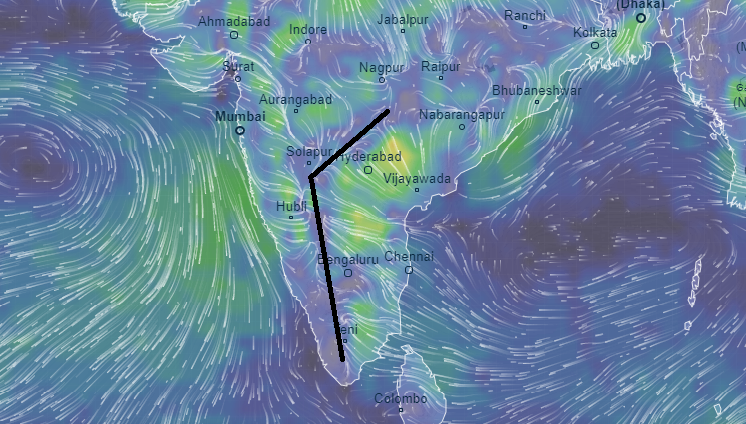 3. Seasonal Low: The heating in the sub continent has started from March end in the core region of Thar desert as well as in Gujarat .
North and central India has seen below normal temps during this time .Heat is expected to pick up in these regions during the coming week.
The map below depicts the heat spreading (yellow areas increasing).

Barmer reported above average temps during the past week (3 to 9 April).

In June,the seasonal low, which stretches to Arabia from India, normally starts forming in the Barmer and adjoining regions in April.
Heat lows are formed in Central /North central India during summer season.But as the seasonal low establishes itself during the summer season progression ,the heat lows become less conspicuous.Today, the mean sea level pressure is around 1010 mb in the Thar desert core seed region. Isobars of 1010/1012 mb cover almost the entire Indian region. (The ultimate low in the core in June should be 994mb).

As the core region heats up and the LWD is formed , the seasonal low should get established.

The tropical Pacific remains neutral with respect to the El Nino–Southern Oscillation (ENSO). Atmospheric and oceanic indicators of ENSO including the Southern Oscillation Index (SOI), trade winds, cloudiness near the Date Line, and sea surface and sub-surface temperatures in the tropical Pacific Ocean all continue to persist at levels consistent with neutral ENSO.
i) The Oceanic Nino Index (ONI) is based on SST departures from average in the Nino 3.4 region, and is a principal measure for monitoring, assessing, and predicting ENSO. The last 3 overlapping seasons show towards establishment of a neutral event. ONI latest is 0.5 ( 0.5 to -0.5 is neutral. Above 0.5 is El Nino, and below -0.5 is La Nina).

iii) The 30 day Southern Oscillation Index (SOI) is calculated using the pressure differences between Tahiti and Darwin.It is in neutral range currently. 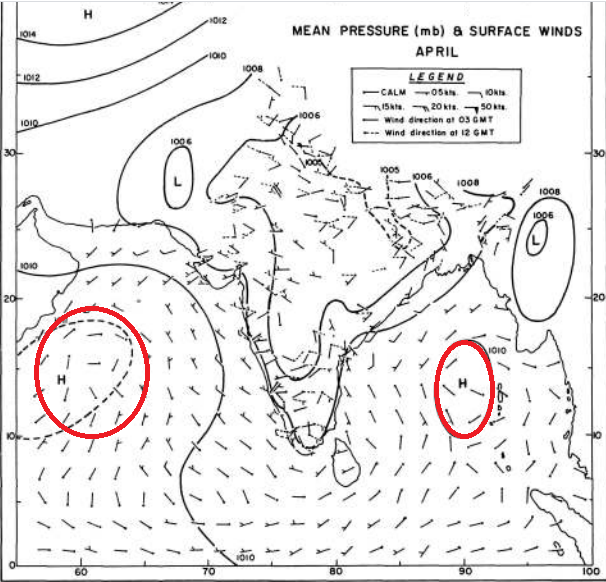 The winds North of the Equator are revolving round a High in the Arabian Sea and around a weak high in the Bay of Bengal.These are normal synoptic features seen in April.
But as the second half of summer progresses , the high over the Bay of Bengal should collapse and give way to the formation of lows over the Bay of Bengal / Andaman sea.
As the Monsoon strikes the Andaman Sea by mid May, developing wind currents ( Westerly) are required to be observed initially near the Eastern side of the Southern Indian Ocean, and this is weakly forming as of today near Sumatra.


ITCZ: This Seasonal trough passes from the South Arabian Sea to Andaman sea after the withdrawal of SWM in Oct. Shifts further south in Dec. Moves North during South West Monsoon.
Now South of the equator. 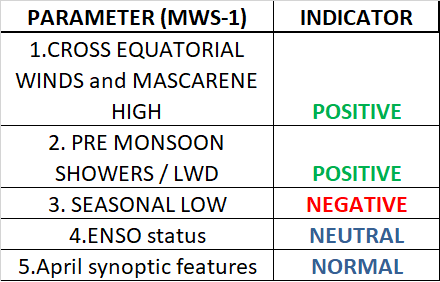 Parameters analysed as of now show normal progress for Monsoon Advance on time.

New Readers, please note, These initial Parameters are normally (every year) considered in MW Series-1 to gauge and estimate the arrival of South West Monsoon (SWM), not schedule or strength. There are more parameters to be considered, as and when they are developed and to be taken into consideration.Time schedule of arrival is normally indicated in MW-3, and strength/quantum in May.
MW-2 on 24th April.

This MW-1 is largely prepared and composed by Vagarian Rohit. The author had to just oversee it.

Excellent analysis! Thank you very much.

Great analysis as always.... Currently Indicators showing mostly normal to positive
signs ,hope it will remain same positive ahead to and give bounty full monsoon rains all over country..

Curtain raiser to swm 2020 with positives giving atleast some positive vibes in what is otherwise a depressed scenario caused by corona. For regular readers this is the most imp article in this blog for each swm season. Regular readers must have noticed credit to article going to one of the great contributor and every ones Favourite Rohit who keeps on updating blog with newer ways. Every year Rajesh sir steers the 1 st article.

Hope you and all Vagaries readers are safe.

Always exciting to read your pre-monsoon analysis. Let us hope for another bountiful SWM this year too, helping the farmers especially across the country.

With entire world in grip of Virus sanitization has become very important - repeated sprays with soap and volumes of water. No state can afford to be in drought.