Posted Monday Night:
AS-3, lets call it as Cyclone "Luban"is located at 12.5N and 61E, and with estimated core pressure at . Core is wrapped with a defined circulation,and estimated winds at 45 knts-55 knts. Two prominent STRs exist,one North east of the System over NW India, and another North West of the system over Saudi Arabia. The second STR becomes dominant and prevents the cyclone from going Northwards (which we said could happen) and will track towards South Oman/Yemen.
Will strengthen more.
Due to the above track changes, chances of some rain over Mumbai diminishes.
1/2 degrees drop in day temperatures expected.

BB-12, now a depression,is located at 14.3N and 88.2E. Tracking NW towards Odisha/W.Bengal coast. Favorable conditions for further strengthening. NW and N/NW movement will pull moisture away from coastal TN.

As mentioned, Monsoon has not yet withdrawn from Karnataka Southwards. Vagaries has not announced any date for NEM commencement. 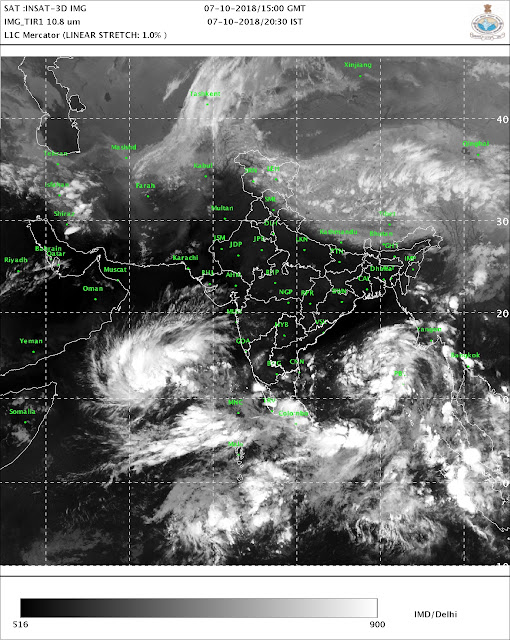 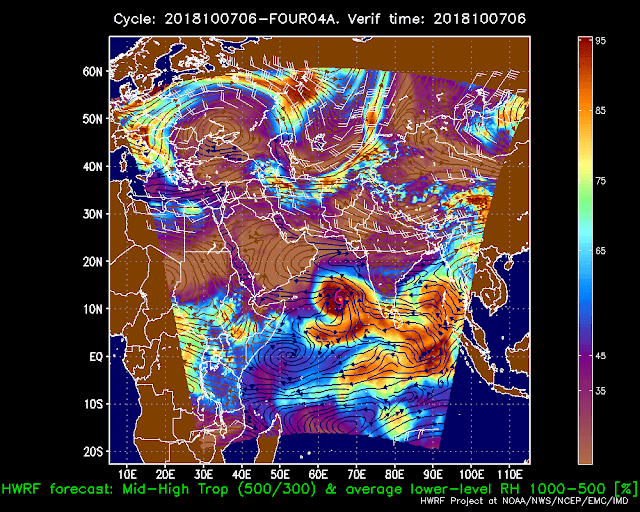 and AS-3 could track W/NW towards South Oman.

Rain Swath as estimated by HWRF 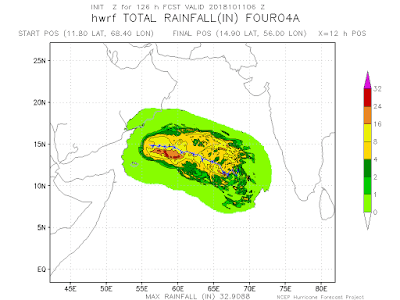 Bay Low has formed, and is steering towards Odisha Coast. STR sems may prevent Southward track.

Depression formed in Arabian Sea, AS-3, located at 11.3N and 66.9E. Estimated core pressure at 1000 mb and estimated winds at 25-30 knts.
System will track NW and intensify into Cyclone "Luban" by Monday. Will head towards Oman.Likely to reach Oman coast Tuesday/Wednesday. Strong winds and rains likely in South Oman from Tuesday.

6th October, South West Monsoon has withdrawn from Mumbai and withdrawal line shown below.
Withdrawal likely to be halted South of Goa for 2 days at this point . 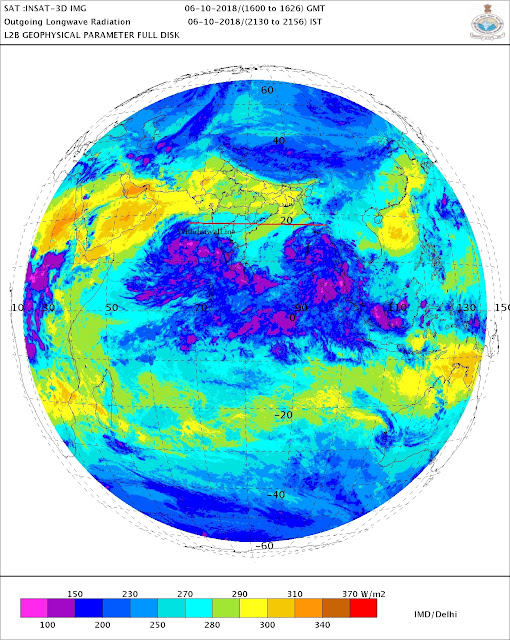 As expected, Mumbai Scruz recorded 37.2c and Colaba 36.6c on Saturday...
Mumbai will be hot and dry (37c) on Sunday 7th and Monday 8th.
On Tuesday 9th and Wednesday 10th, the outer bands of Cyclone Luban may bring some medium showers to Mumbai.
And along the Konkan coast.

A Low likely to form in East Central Bay around 8th. But this may not effect the Eastern Coast of India.
By Rajesh at October 06, 2018

Sir what will be winter forecast for north india, gujarat and mumbai.
Past some years winters are warmer and this year we have El Nino.
When would night trmperature start falling in mumbai..

Is Oman a desert or undergoing climate change phenomenon ? Lucky Oman 2 cyclones to hit in span of 4 months! May 2018 Cyclone Mekunu dumped 600-300mm of rains widespread - multiple days and now cyclone Luban. Should have at-least hit TN/AP. (I am disappointed).

is Imd changing criteria of NEM onset which was not declared before 10th October?

Among other causes, one possibility is that the Arabian Sea surface becomes warmer than other seas during this period. Second, due to the interplay of global warming, climate variability and weather changes, the winter northeast monsoon circulation has been weakening over the year

Cyclones are uncommon in the Arabian Sea and off the Eastern African Coast, but that is changing, thanks to human-caused climate disruption. Their frequency and strength is increasing dramatically with each passing decade as the atmosphere continues to warm due to human fossil fuel emissions.

“One important factor is the wind shear, or the change in direction and speed of the winds from bottom to the top of the atmosphere. Generally, this wind shear is relatively strong in the Arabian Sea compared to the Bay of Bengal. That is, while the winds are generally in the same direction throughout the atmospheric column for Bay of Bengal, they are in the opposite direction for the Arabian Sea,” Koll said. “Opposing winds prevent cyclones from developing vertically, which is why the number of cyclones are fewer in the Arabian Sea.”

“This is what Murakami says is changing. They show that the wind shear is weakening in the Arabian Sea with increased carbon dioxide in the atmosphere. They link the change in wind shear to a weakening of the north-easterly monsoon winds,” said Koll. “However, we have not found any evidence for a weakening north-easterly monsoon. Hence, we need more research to connect all the missing links to explain the mechanism behind increasing Arabian Sea cyclones.”

Vinod Desai: Mumbai will be hot and warm now. Expect below 20c in November.North should expect early winters from end October. As soon as these systems make the WD effective.

So no cooler day and night for Mumbai...its unbearable heat in morning and night in Mumbai

Below statements from IMD...

Due to the above intense systems, the wind regime has changed over the Bay of Bengal and adjoining Sea areas. As a result, the rainfall activity is very likely to decrease over south peninsular India from tomorrow onwards. Hence the commencement of northeast monsoon rainfall over Tamilnadu & Puducherry, Kerala and adjoining areas of Andhra Pradesh & Karnataka is not likely to take place as assessed earlier. Development of favourable conditions for northeast monsoon will be closely monitored and its commencement over Tamilnadu will be assessed after the life cycle of the cyclonic system over the Bay of Bengal.

After this western disturbances will start giving rains to Northern India again problem for NEM onset.

It is unbearable heat in mumbai. Summer was better than this weather. Seems ElNino has taken away all rains and now there will be no winter as well.. even if no ElNino winters are becoming warmer every year.

The Bureau's ENSO Outlook has been raised to El Niño ALERT. This means there is approximately a 70% chance of El Niño occurring in 2018 – around triple the normal likelihood. Similarly, in the Indian Ocean, a positive Indian Ocean Dipole (IOD) may have started.

When combined, these two events in spring increase the possibility of a dry and warm end to the year. It also raises the risk of heatwaves and bushfire weather in the south, but reduces the risk of tropical cyclone activity in the north.

The tropical Pacific Ocean has warmed in recent weeks due to weakening of the trade winds, while the Southern Oscillation Index has fallen to typical El Niño levels. Models suggest further warming of the Pacific is likely. Four of eight models predict El Niño thresholds will likely be exceeded in the coming months, with another two falling just short.

In the Indian Ocean, there are signs that a positive IOD is currently underway. The IOD index has exceeded the threshold (+0.4 °C) for the last four weeks. However, these values must persist until November for it to be considered a positive IOD event. Model outlooks suggest positive IOD values are likely to continue through the austral spring, before returning to neutral values in late November to December.

@Vinod Desai, I think what is really making things miserable in Mumbai is the very high levels of Humidity, even though the Monsoon has withdrawn couple of days back, the humidity levels continue to be very high. I think the humidity continues to be high due to Cyclone Luban which is throwing moisture over the coastal areas.