Around the Arctic Circle, observers are reporting an outbreak of polar stratospheric clouds (PSCs). "The sky was filled with their brilliant colors from sunrise to sunset," says Mia Stålnacke, who sends this picture from Kiruna, Sweden: 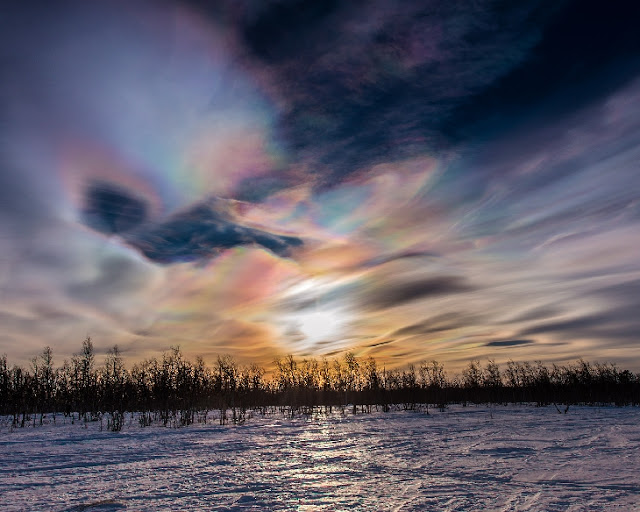 These clouds are newsworthy because normally the stratosphere has no clouds at all. Home to the ozone layer, the stratosphere is arid and almost always transparent. Yet, Stålnacke says, "we've been seeing stratospheric clouds very often this winter and last."

According to multiple longtime residents of the area, the Feb 13th display was exceptional.
"I've been living here all my life (33 years)," says Stålnacke. "I definitely feel that these clouds are appearing more often then they used to. I remember seeing them a few times/year since I was a kid, but these last couple of years we've had them much more often--sometimes for almost a week straight. Others seem to feel the same way; I see local groups on Facebook flooded with photos of PSCs and comments on how often they're appearing now."

"The clouds were all over Finland, too," says Matti Helin who took this picture on Feb. 13th: 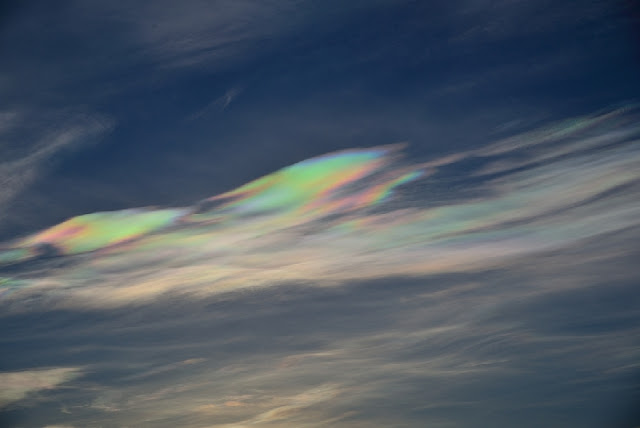 What's going on up there?
PSCs are a sign of very cold temperatures in the stratosphere.  The clouds are made of ice. Indeed, that is the source of their remarkable color: High-altitude sunlight shining through tiny ice particles ~10µm across produce a bright iridescent glow.  For ice crystals to form in the very dry stratosphere, temperatures must drop to around -85º C.
Courtesy Spaceweather.com

Sir,I have spotted these type of clouds in my area a few months back.This isn't a polar region ,Then what could be the reason?

Abizer: These clouds form and give a spectrum of colours only when the temp in the startoshere drops to -80c, which is not possible in tropics. These clouds form in the dry stratosphere only. We see similar clouds in our region , Cirrus ice crytals.
Anyway, please send a pic of what you saw if you have it.

Rajesh sir,as of now ,I don't have any picture of those clouds.I didn't click any picture.


Rajesh sir,the above link has the picture of clouds which were seen by me.may be these are the cloud iridescence.
Cloud iridescence is the occurrence of colors in a cloud similar to those seen in oil films on puddles, located in the general vicinity of the sun or moon. It is a fairly common phenomenon, most often observed in altocumulus,[1] cirrocumulus, lenticular clouds and cirrus clouds.[2][3][4] The colors are usually pastel, but can be very vivid. When occurring near the sun, the effect can be difficult to spot as it is drowned in the sun's glare. This may be overcome by blocking the sun with one's hand or hiding it behind a tree or building. Other aids are dark glasses, or observing the sky reflected in a convex mirror or in a pool of water.

The effect is similar to irisation. Iridescent clouds are a diffraction phenomenon caused by small water droplets or small ice crystals individually scattering light. Larger ice crystals do not produce iridescence, but can cause halos, a different phenomenon.

If parts of clouds contain small water droplets or ice crystals of similar size, their cumulative effect is seen as colors. The cloud must be optically thin, so that most rays encounter only a single droplet. Iridescence is therefore mostly seen at cloud edges or in semi-transparent clouds, while newly forming clouds produce the brightest and most colorful iridescence. When the particles in a thin cloud are very similar in size over a large extent, the iridescence takes on the structured form of a corona, a circular bright disk around the sun or moon, surrounded by one or more colored rings.[5][6]

Maharashtra is most vulnerable to hailstorms in India...

Rajesh sir,please have a view of my link given above.....the phenomenon is iridescence clouds...may be the one I have spotted (multi colour spectrum)....both look the same (stratostrophic&iridiscence clouds).please can you explain it in clear words.

In gurgaon now for few days - cool mornings and hot days , and dry. Next week much hotter as per forecast.

abizer: Link you sent are alto clouds showing a halo and corona. Thats what we generally see here.