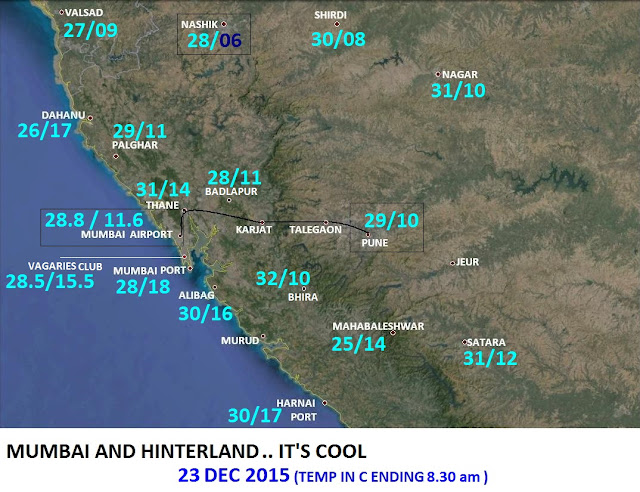 Other Maharashtra Regions:Max temp of Wednesday and Min of Wed morning.

North Konkan (Mumbai) continues to be cooler than most parts of the Deccan plateau !! 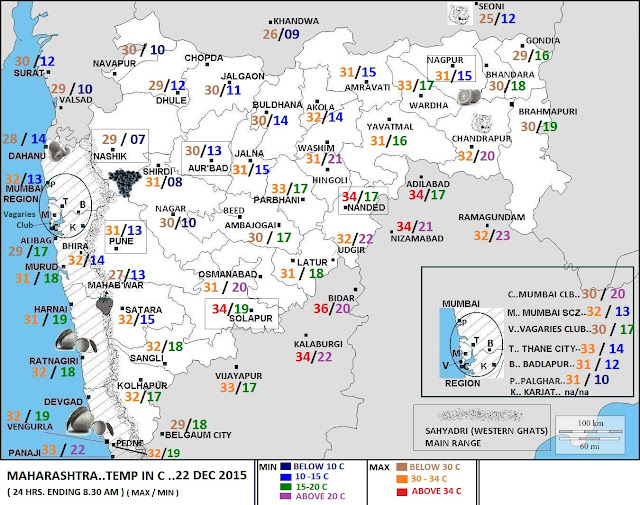 Dal Lake Freezes:
With the beginning of “Chilai Kalan”, parts of world-famous Dal lake froze on Monday as Srinagar city witnessed the coldest night of the season with the mercury plunging to 5.6 degrees Celsius below the freezing point.

A Met official said Dal lake and other water bodies in the Valley were partially frozen due to intense cold wave conditions. “The minimum temperature recorded in Srinagar on Monday was minus 5.6 degrees. The lowest ever recorded in December has been minus 12.6 degrees on Dec 13, 1964,” he said.

(Srinagar News From Deccan Herald)
By Rohit Aroskar at December 22, 2015

Difference in temp between North Konkan and South Konkan/Goa is significant :

Difference in temp between North Deccan and South Deccan plateau is significant :

El Niño remains strong, but some cooling now observed at depth
El Niño remains near its peak, with the tropical Pacific Ocean and overlying atmosphere consistent with a strong event. Models suggest the event will start to decline in 2016, but a return to ENSO-neutral is not likely until at least autumn.

Sea surface temperatures and cloud patterns near the Date Line remain well in excess of El Niño thresholds. The Southern Oscillation Index (SOI) has returned to El Niño levels following a brief period of neutral values. Below-surface ocean temperatures in the eastern tropical Pacific remain significantly warmer than average, but clearly some cooling has occurred in the past fortnight. Changes in the sub-surface are an important indicator, as the sub-surface plays a significant role in maintaining the strength and longevity of El Niño events.

El Niño's influence on Australian rainfall is variable at this time of year, with both wetter and drier summers observed in past events depending on how quickly the event breaks down. Both daytime and overnight temperatures tend to be warmer than average during an El Niño summer. For more information, see the official rainfall and temperature outlook.

Mahabaleshwar 14.0°C continues to warmer than all above mentioned cities !!