The push over of the monsoon southwards since last week, has resulted in good precipitation in the southern peninsula, as we had discussed in the previous blogs. The monsoon has been active over interior Karnataka during the last 8 days.

The immiediate effect of this active phase, was in Bangalore. Heavy thundershowers have been lashing the city last few days. The diagram sho 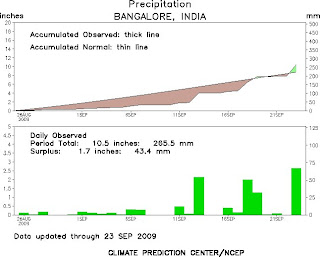 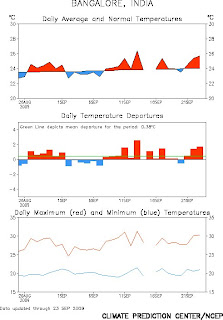 t, and, there are quite a few days with very heavy rains of more than 50 mms.
But this has not resulted in cooling down the city to the extent expected. The temperature diagram of B'lore shows a major portion of the rainy days as "above normal', in the red !
Now, for B'lore, I expect an odd thundershower to pop up , in ther evenings specially, till the middle of next week. But the amounts of rain will be less than the previous days, maybe less than 25 mms. After Wednessday, the intensity of the rains will lessen.

Rainfall along the west coast and interior south peninsular India will now slow down, and will give the region some break for a few days.
This lull would be broken with the formation of the `low' in the Bay, forecasted for 27th. September, from when rains are forecast for peninsular and Goa and Karnataka coast.
A late-September low-pressure is likely in the Bay of Bengal around Sunday, and the monsoon maintains its precipitation over the peninsula.
Meanwhile,the cyclonic circulation over the east-central Arabian Sea off the Karnataka coast has become less marked as of Thursday, and has resulted in the formation of a trough extending south from Konkan towards the Kerala coast.
So, our watch for the low off the Goa coast is "called off". ( True to this year's monsoon behaviour). For the west coast, including Konkan, I would now concentrate on the upcoming low in the Bay, and see its effect.

Mumbai: A dull period with very little rain this weekend. Hot at 33c for the weekend with the night low at 27c. Pretty hot and uncomfortable. Some precipitation may resume next week.

Post Script: Dr. Uma from B'lore complains and is tired of the rains. Wants the rains to stop now! You're right and justified in this Uma. B'lore has got more than its fair share of rain. As on 25th. the city has recieved 700 mms, 300 mms more than the normal !
But the "winter monsoons" are not too far off !
kapadias@gmail.com

I have mentioned some precipitation in Mumbai next week. Yes its possible. But no question of it being late at all.Several times we have seen monsoon precipitate heavy rains in Mumbai in early october. Monsoons have withdrawn commonly from mumbai around 10th.October.