The ICTZ movement southwards mentioned in the last blog, is late this year, and has been the main reason of the cloudiness and lows in the Arabian Sea. And the late arrival of winter in the Indian region.
This is also reflected in the weather in the southern hemisphere.
The rainy season in Mozambique usually begins in October, with the heaviest rains falling between December and March, but this year, there is still no sign of the annual heavy rains.The ongoing drought conditions in central and southern Mozambique are prompting concern for insufficient water resources .
Some heavy showers are forecast to arrive in southern Mozambique later this week. 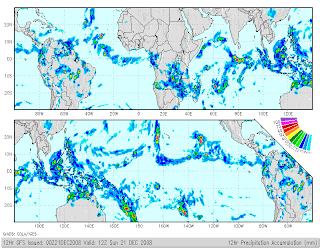 Also ,Tropical cyclones Billy and Cinda continue to churn out in the Indian Ocean, with Billy tracking towards Western Australia. Both cyclones have arrived late in the year, with the majority of tropical storms normally occurring between May and November.
The tropical cloudiness map shows the ICTZ, near the cloudy areas.
kapadias@gmail.com
By Rajesh at December 21, 2008