A cyclonic circulation in mid levels (~700 hPa) near Kerala coast expected to bring moderate rain/thundershowers along Kerala and Karnataka coasts and Ghats. 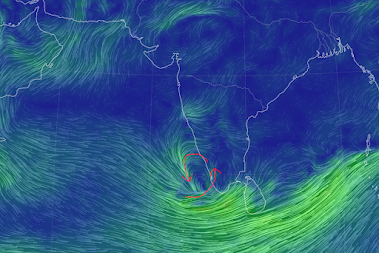 Wind instability and the effect of this cyclonic circulation is causing heavy thunderstorms near Bangalore region and interior Tamil Nadu. This can persist for another 2 days.

The earlier estimated low pressure area BB-12 may form in central Bay of Bengal by 7th/8th September and track west-northwest, towards north Andhra Pradesh coast. The monsoon trough which is close to Himalayan foothills, will move south towards the Bay low. This can increase rainfall for central India as well as set-up an offshore trough along west coast enhancing rains along konkan and Goa by the end of the week.

We can get Rain/thundershowers in some areas, along with warm and humid weather. Rainfall likely to increase Thursday 8th, onwards

Interior konkan (Thane/Palghar districts) and Ghats have more chance of heavier thundershowers for next 2 days.

Marathwada region of Aurangabad, Jalna, Beed, Parbhani, Latur, Nanded to get light to moderate rain/thundershowers during this period. Some localized heavy showers possible.

Vidarbha region to also get light rain in some parts, more chance of heavier rain towards end of the week once BB-12 moves inland.

Forecasts can change to some extent and not all places will receive well spread rainfall (given the thunderstorm nature of the rain).

Monsoon withdrawal from west Rajasthan not expected anytime soon, not before mid September at least.