With the last visible weather system around the Indian Sub Continent moving away, we have no major system or event forming in the next 4 days. (Only a weak insignificant East-west trough along the 20N line). 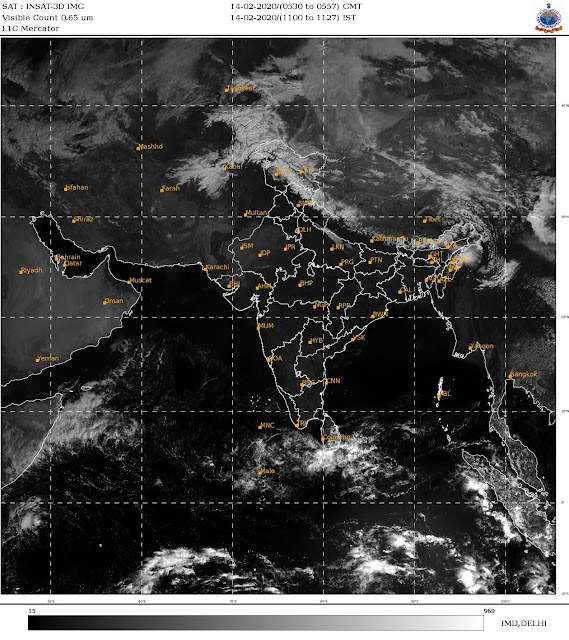 Also. days have tarted heating up over larger aeas, starting from the Southern Peninsula...a bit early for the season...With Gulbarga (N.I.Karnataka) recording 38.4c on 13th February. 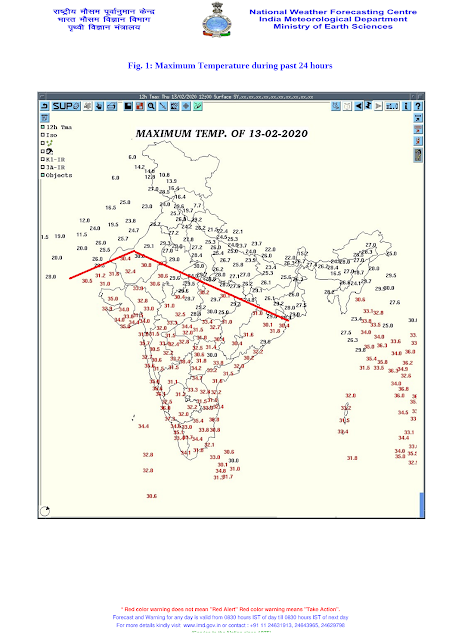 Hence strong gusty winds in the NW region , including Delhi, will prevail. This could result in a fall of 3/4c in the NW plains and Delhi next two nights. (Current level Delhi = 13.7c) from current levels of 11-13c.

Outlook from 14th February-19th February:
Dry weather all over India (Except the Extreme NE States where light isolated rains expected )

Next system, a WD coming to our region from 19th February.

Mumbai: Already touched 35.7c (Scruz), 35.5c (Thane), 34.9c (Badlapur) and 35c (Karjat) on 13th. But with lower humidity. Expected to remain in the 35/36c range till 19th. Nights also getting warmer without the nip.
Pune: Gradually loosing the winter nip and rising to 33c in the time frame mentioned.

Warning: However, Interior North Konkan, (Panvel,Karjat, Badlapur and surroundings) expected to become hot from Monday thru Wednesday going up to 38/39c. An isolated 40c may also pop up.
Surat and Inetroir Gujarat may riase to 37c next week.
Expecting the Weather to "take it easy" and cool down to reasonable readings after 19th...

Thanks for a detailed all over India Update.. was looking for Raj And Guj state in particular for 16 th Feb onwards