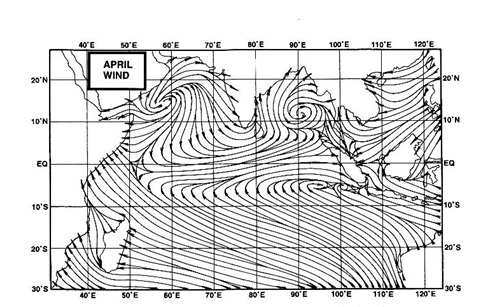 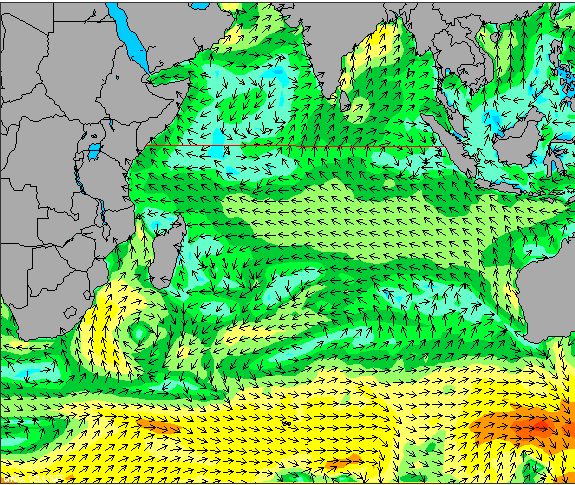 During Monsoon Watch 1 , the cross equatorial flow was weakly forming.

i) The cross equatorial wind flow, has just about picked up in the Western sector Southern Hemisphere. Winds, have not yet achieved the required speeds, but just hitting the East African coast. The Northwards movement of the ITCZ will surely hasten and strengthen the winds.

ii) In the eastern sector, in the Bay Branch, the Cross equatorial winds are perfectly diverted and change direction towards SW after just crossing the Equator. Thunder cloud (Cb) developments are seen near the region South of the Equator.

And that is exactly where the start should be for the SWM to arrive at the Andamans. Upper winds at 100-400 hpa are vigorously aiding the lower winds to attain the required strength.
The winds hitting Sumatra coast are not Westerly (as required), and also need to gather strength soon.

Mascarene high pressure zones in the South Indian Ocean. Main High reading now 1024 mb and another one at 1023mb has been observed between Madagascar and Australia. 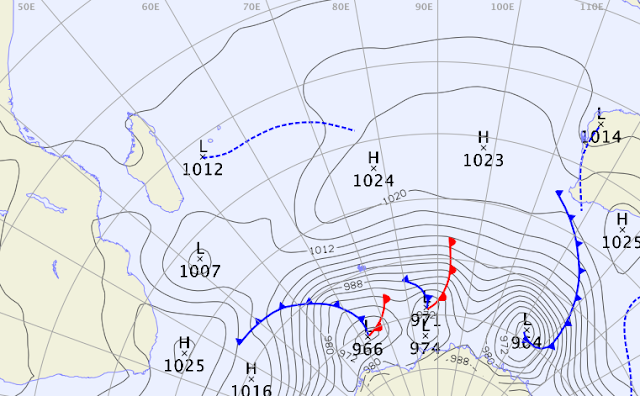 The "Power House" of the Monsoon winds is slightly behind schedule, for this time of the season. But it is expected to strengthen fast with no tropical storms around.

Heat wave is currently on across North, Central,Western India.
The core low formation region(Thar desert/Sindh) has heated up early this summer . Barmer has approached 46 c and recorded min temp above 30 c. April heat records have tumbled at many locations in the subcontinent. On 19th April 2017, first ever 50 c temperature in April in Asia has been recorded at Larkana (Sindh).
Temperatures of more than 45 c have already been recorded in many states of India . Even at Srinagar (Kashmir),Shimla (Himachal) temperatures have approached around 29 c in April . Delhi AP was 44.9 c on 20th April 2017. 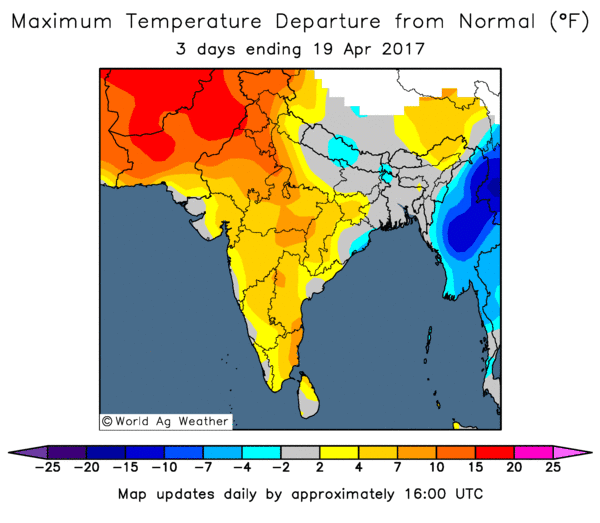 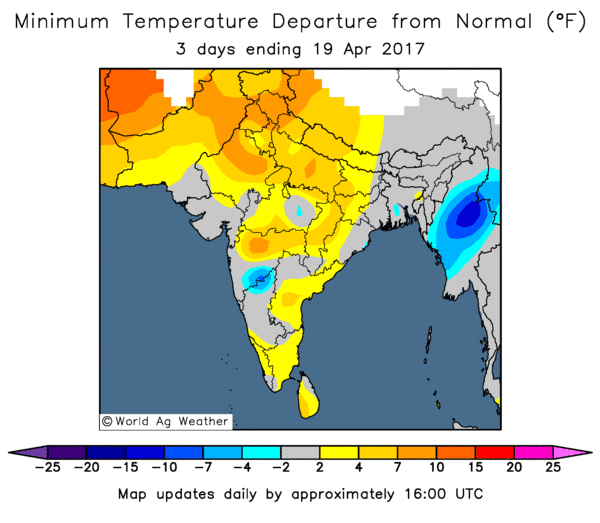 The seasonal Low, as a result of good heating, is shaping up fast. It has shown good progress after MW 1 when it was 1008 mb. 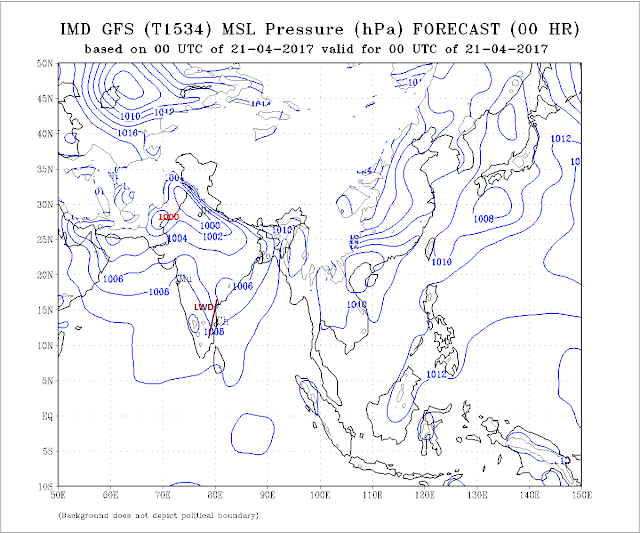 Lows over MP, Central India, should become less conspicuous because of the strengthening of the seasonal low over NW india. This enhances the speed of the Seasonal Low formation. Normally is required to start taking shape for the monsoon by the second week of April.
LWD (trough) is currently near the Southern region of the Peninsula…running roughly from Karnataka towards the Kerala Coast. 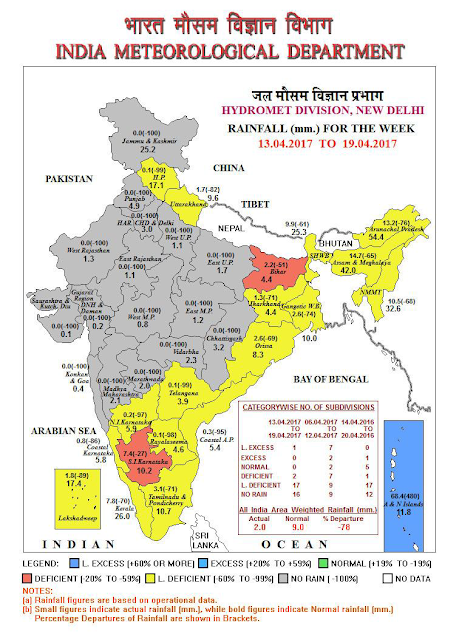 Pre –monsoon thunderstorm activity is restricted to South Karnataka and Kerala. Some activity seen in patches along Coastal A.P. and Odisha…..after  MW 1 release.

In reality, this LWD ( full formed) remains till June, in variable phases, and finally merges with the Monsoon trough (axis)/ITCZ  when the ICTZ moves towards the Sub Continent.
Indicator: normal

The Oceanic Nino Index (ONI) is based on SST departures from average in the Niño 3.4 region, and is a principal measure for monitoring, assessing, and predicting ENSO. After 5 overlapping seasons showing towards establishment of La Nina, we see a neutral turn. ONI latest is -0.2... ( ONI of -0.5 to 0.5 is neutral. Above 0.5 is El Nino, and below -0.5 is La Nina).


4. The Bay has hosted a pre monsoon low during mid April.
As discussed, we should normally see a low sometime after the 15th of April. The high pressure region in the Bay, at sea level, no longer prevails.

We prefer the Bay parameters to show progress faster , as the SW Monsoon is expected there in 22-25 days…

5. To bring the existing SE winds above the equator (as SW), the ITCZ should move northwards. Around 1st. of May, this should cross the equator. The ITCZ should now come back to its Northward position, as the effective "Lows" created by the Rossby Wave are reducing.
ITCZ is just south of the equator (1 s).

Summary : One parameter is -ve as of today . Parameters have improved compared to MW 1 .
We will put up the estimated date of arrival in the MW-3.

Major Contribution for this MW by Vagarian Rohit Aroskar.
By Rajesh at April 22, 2017

Congrats Rohit for the excellent inputs...we got to see some of them in our WA group....!!!!


El nino is forecasted to strike again after July - your thoughts on this and effect on the monsoon.

Good Read Rajesh Sir, looking at some long term models there appears to be some issue with CEW with some parts of Arabian Sea seeing Easterlies even as late after 20th May though as you rightly say things could drastically change.

What a painstaking effort to give readers scenario of earlier years too so that comparison becomes painless for readers. Your work always carry your signature abd by reading one can make out its Rajesh sir write up. Congratulations sir.

In MW 2 Factors have turned up better than what they were Under MW1. Let's hope things would turn even better as time unfolds itself.

Very interesting article....
Finally Karnataka wakes up. Reliability of IMD mathematical models are in question? KAR is looking for its own models..

In the last 16 years, Karn­a­taka has faced drought for 13 years. But in all these years, national reports, drawn from Indian Meteorological Department (IMD) data, have said that monsoon was either normal or above average. (for example 2016 IMD failed massive southern Indian drought)

Rajesh sir, can you predict the time of the onset of monsoon over the west coast. Will it be early this year or late as usual?

Great refresher as usual from Rajesh Sir.
Was on a quick official visit to Mumbai Fri/Sat. Got some time to enjoy the feeble sea breeze late evening on Marine Drive. Seems the peak dry heat has abated. But humidity levels are below par for the month I suppose.

It would be nice if you can put some kind of comparison graph between Vagraies prediction V/s actual arrival dates(for last 5-6 years) of monsoon in MW-3.

And similarly for MW-4, comparison of prediction V/s actual of overall rains

Hello sir,
I will be visiting patan(North Gujarat) between 2 may - 6 may. How would be the weather there during that time. At present temperatures are below normal.

The El Niño–Southern Oscillation (ENSO) remains neutral. However the Bureau's ENSO Outlook is currently at El Niño WATCH, meaning there is around a 50% chance—twice the normal likelihood—of El Niño developing in 2017.

Tropical Pacific sea surface temperatures (SSTs) have warmed since the start of the year. SSTs in the central tropical Pacific are now 0.5 °C warmer than average, still below the +0.8 °C threshold for El Niño levels. Atmospheric indicators of ENSO remain firmly neutral, although the Southern Oscillation Index (SOI) has returned to negative values over the past fortnight.

International climate models suggest the tropical Pacific Ocean is likely to continue warming in the coming months, though in recent weeks some models have reduced the expected extent of warming. Five of eight models indicate that sea surface temperatures will exceed El Niño thresholds during the second half of 2017, a reduction of two models since the last Wrap-Up release. It should be noted that models have lower accuracy at this time of year.

El Niño is often, but not always, associated with below average winter–spring rainfall over eastern Australia. Of the 27 El Niño events since 1900, 18 resulted in widespread dry conditions for parts of Australia.

Good rain in mysore and KGF area's on Tuesday evening.
In bangalore most area's got drizzle for 1 hour and infact the only place with heavier rain was the cricket ground. Which led to IPL match being cancelled. Cricket grounds and rain, there is some correlation ...hahahha

Excellent and detailed analysis as always. Thank you Rajeshbhai and Rohit. A necessary reading every year for all those, who are trying to understand the intricacies of SW Monsoon!

Thanks Atulji..MWS is a wonderful legacy created by Rajesh sir