Last week, the Heat was very much restricted to the Eastern/Central parts of the Indian region. Elsewhere, the days were in the normal range, with an active A-1 bringing precipitation in the Northern and NW regions of the Sub-Continent. Gulmarg and Sonmarg even had snow on Saturday (14th). All very much in line with the Vagaries' Weekly forwecast put up last Sunday.
Accuracy of last week's forecast 85%.


Next Week;
Refer to Vagaries Map above while reading Narration below: 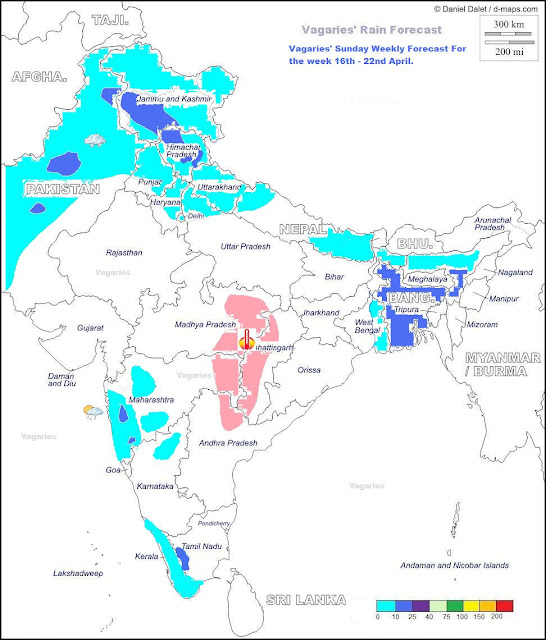 This coming week, we some "activity". A-2 is coming up. On Wednesday, A-2 will be covering almost 80% of Pakistan, from the North down to the Sindh coast in the South. Barring extreme South/Eastern areas of Pakistan, rain is expected almost in all the regions. Hailstorms expected in the plains of Punjab and Upper Sindh regions of Pakistan.


Wednesday/Thursday, the system moves into India, with the precipitation moving NE into Punjab, Haryana, Delhi, H.P, Utteranchal and Kashmir. Will keep the day temperatures within control most of this week. Again, hail is expected in the plains of NW India.


An embedded Vortex forms over Western Mah. on Thursday, bringing rains and thunder in the region. Thursday and Friday could see thundershowers in the Western region and North Konkan (including Mumbai).
No low or system expected in Bay.

Tuesday 17th and Wednesday 18th: Rain Expected.
Effect of the system ( A-2) will keep the day temperatures within the 34/35c mark, and the occasional night could fall to 20c during the week.

Thursday,19th/Friday 20th. Occasional lightning with a few rumbles of thunder.


Pune. Was in the forecasted range. week, with the low constantly at 18/19c (as forecasted last week).

Mon/Tues/Wednesday: Expect the day to rise this week to 39c,

Thursday and Friday: Rain, bringing down the temperatures by 2/3c.


Surat could be on the outer limit of the vortex, and possibly get some drizzles on Friday.


Bangalore: Warm and partly cloudy. Some precipitation expected on Wednesday. Days will be around 35c, with not much relief at night.
Chennai: Coastal T.N remaing relatively dry. Seeing some rains in the week in the Nilgiri hills adjoining Kerala.


Pradeep has worked hard, and compiled a list of the wettest places in terms of annual rainfall in each state of India. Pradeep 's presentation is very well made. He personally wants Vagaries' to put up the list for its readers. The compilation can be viewed here on Pradeep's Blog.

Apart from the 14 stations which receive 5000 mm rainfall, i have done
research which took me nearly 3-4 weeks to obtain authenticated data from various sources to see whether other places that receive 5000 mm apart from IMD’s 14 places and in the process have uploaded the state wise rainfall record holders. This report will be updated often and popped up as soon as i get more data from public.

Rajeshbhai, seems you missed predicting Mumbai heat for Sunday 15th, papers reporting hottest compared to last 2 years. Infact today too it is not much different. Steaming head of A-2 ?

emkay: If i've missed on my prediction, i'll admit it. But, this 38c at S'Cruz is baffling and "out of tune". Its not possible. The stations from Dahanu down to Goa are all showing 33c or 34c. Not a degree more or less ! How can one isolated station shoot up to an unrealistic 38c !And that too the graph shows the reading shooting to 38c at 11.30 am. NOT POSSIBLE. And throughuot the day its down to 35c or below ??

let me give my personal observation, unusually I was in Dadar from 11:00 AM to 16:00 hrs exposed to Sun. Was praying for the sea wind to set in to cool things but do not think that happened during that period. Also as tweeted by me, Panvel at 11 P.M. was unbearably hot for a night time temperature.
So would like to go along with the IMD observation that the winds were from North yesterday from noon.

@emkay!i completely agree wid ur observation!!i study in kalamboli and i noticed the harsh heat at 1130 hrs,it was damn hot without any sea breeze,,also i noted tht the rh humidity fell yesterday !!!@rajesh,,its very strange that an isolated area from santacruz to panvel witnessing such freak weather!!also note the rh humidity was a bit lower at santacruz during peak heat!!hopefully u r enjoying spring over ther!!take care nd btw the pics r awwsum,,

Rajesh, i was in Ghatkopar yesterday and i bet it wasnt 38 by any means..must be arnd 34-35...though today it is possibly arnd 36.

Back here after long time.. Pleasantly surprised with your thundershowers prediction for Mumbai. Just saw that couple of weather sites expecting 6-8 mm of rain on friday. I know its difficult to predict exact rain amount when its comes to unseasonal thundershowers but will we get just sprinkle or more than that? Also read Monsoon Watch,after reading it for last 3 years I noticed that all those parameters slowly starts to turn positive from first week of may. Hoping that India gets good monsoon this year.

emkay/Ganesh/Junaid: I had done my homework well before putting up my answer -:))). The West sea breeze had started on Sunday ( the so called 38c day) by 11.10 am !! and that too it was SW till 12 noon, and west again thereafter ! Colaba too was 34c.
Next day S'Cruz saw 35c, down , and all other Konkan stations were the same as the previous day.
Doesn't convince me this 38c !
and quantum of monsoon we shall start in the 3rd MW aricle, after establishing the formation and initial progress.
svt: rains should be light.

do u plan on putting up the MW today??

Ron: The MW -2 draft is ready. I'Ll just re-check the latest, and put it up on Wednesday night (IST).