B-1 Report:
B-1 was first mentioned mentioned only in the Vagaries' Weekly Report last Sunday. 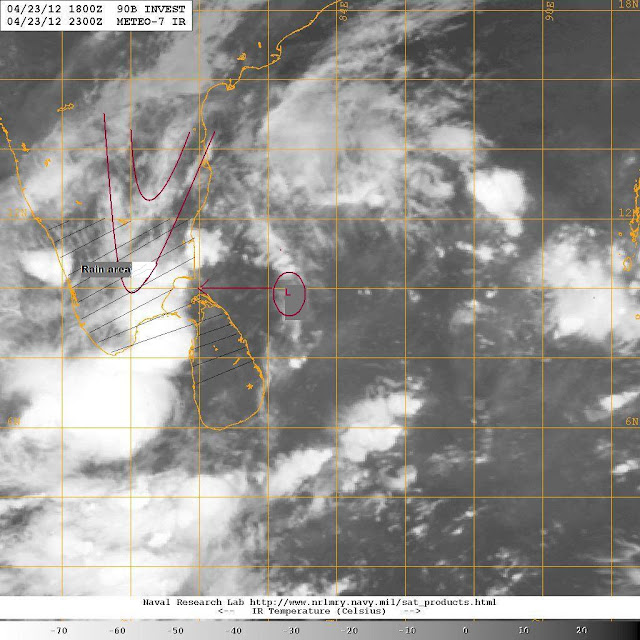 Map/Image indicates Position as at 5.am (IST) Tuesday 24th April.


Now, this system is slowly moving towards the central areas of T.N. coast.
As per assumption, it has strengthened to 1002mb. The W/SW winds along the Western Sri Lanka coast, and to the South of the Island is getting stronger a( +ve factor, for the SWM), and a pull towards the low, has resulted in a concentrated clouding and rainfall, visible to the W/SW of B-1.
The inland trough in the the west, should guide its track.


Rainfall as a whole should be in tune with the  the map put up on Sunday. Good rains expected below the Mangalore/Bangalore/Chennai line.

Other News:
A Meteoroid the Size of a Mini-van Explodes over California....See Space News Page Immediately....


Last week, again, the Heat was very much restricted to the Eastern/Central parts of the Indian region. Elsewhere, the days were in the normal range, with an active A-2 bringing precipitation in the Northern and NW regions of the Sub-Continent. Interior Mah. received thundershowers mid week, and parts of N.Konkan and adjoining S.Gujarat coast too got a sprinkling of drizzles. All very much in line with the Vagaries' Weekly forwecast put up last Sunday.


An exception was the rainfall, though mild, that Saurashtra and North Gujarat region received.
Last week's accuracy: 65%.


Next Week;
Refer to Vagaries Map while reading Narration below: 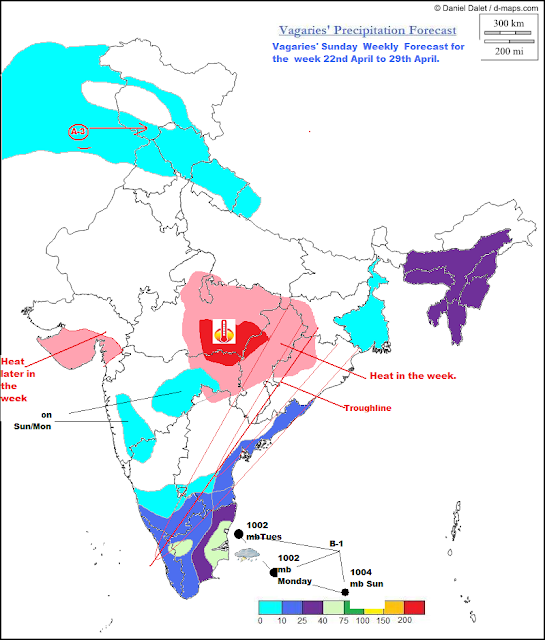 This coming week, we see some "activity" in the Southern regions. A low, B-1, has formed in the SW Bay on Saturday, though weak at 1004 mb.


It is expected to move W/NW, and cross Central T.N. coast at 1002 mb near Pondicherry, at around 11N. B-1 should cross by Tuesday, and being the first low of the season, its behavoiur needs monitoring. Shall keep posting in case there are changes.
B-1 should then merge in the trough running N/S from Bihar to S.Tamil Nadu.
Rains, goood amounts, are expected this week especially along the T.N. coast Tuesday thru Friday.


A-3 is coming up. Barring extreme South/Eastern areas of Pakistan, rain is expected almost in all the regions. Hailstorms expected in the plains of Punjab and Upper Sindh regions of Pakistan.
The system moves into India, with the precipitation moving NE into Punjab, Haryana, H.P, Utteranchal and Kashmir. Will keep the day temperatures within control most of this week. Severe hate isexpected in the Central and Eastern regions of India.


Interior Western Mah can get thundershowers on Sunday and Monday, and clearing in the week later.


City Wise Forecast:
Delhi: Rains expected on Tuesday. The day temperatures will be in the 38/40c range, and the night could rise to 25/26c during the week.


Mumbai: Partly cloudy week. Days will be humid and the feeling will be sweaty, with the days around the 34/35c mark.
Surat would be warm too, with days touching 39/40c.
Pune. Was in the forecasted range last week, with the mild showers.  With  rains till Sunday and Monday, expect the day to rise this week to 39c by Wednesday.

Chennai: Coastal T.N will see a wet week. Heavy Rains and Thundershowers in the week in the Nilgiri hills adjoining Kerala. Chennai will receive rainfall from Monday, gradually increasing on Tuesday. Maybe to around 30 mms. Precipitation till Friday will see a milder week with the days around 34c.

Bangalore: Warm and partly cloudy initially.  Days will be around 35c till Wednesday, with not much relief at night. Precipitation expected on Wednesday thru Sunday.


Karachi will be in the 35c range, with partly cloudy skies. Humid till Wednesday, but humidity dropping from Thursday to see warmer days.
Sukkar: Some clouding till Wednesday and clear later. But as yet, we have not seen any major heat waves in sindh or Balochistan. In fact, the hot spot od Sibbi, which touches 50c in mid May, was a cool 13.7c (minimum) on Saturday. Normal heat and day temperatures in this week too.


See weather pics from Hawaii on Interactive Page...
By Rajesh at April 20, 2012

Rajesh shaib your perdiction mostly accurate.now days sukkur temp below normal and surprisingly active westren disturbance what are you say sir.this is normal month of april and forcaste of may weather.

So, Mumbai DID get some rain Thursday. Bipinbhai reports of some drizzle in Bhandup, and Cmdr Potey says of light drizzles from Thane..-:))

nasirbhai:Thank you.WD keeping the temperatures down till now.and please see next week also.

thunderstorms,rain,wind..from past two weeks in delhi-ncr, what an April it is!!!
Hope it doesn't reach 40 degrees soon :)

When these thunderstorm activities will get stopped in northwest India?????