Approaching W.D. may counter Arabian Sea system:
The trough of lower pressure running from the Arabian Sea thru peninsul 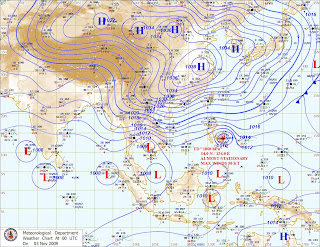 a into the southwest Bay has shifted into the Comorin area on Monday. ( Thai Map enclosed)
The FNMOC has also kept under watch thedevelopment in the southeast Arabian Sea around the Comorin area. At present, it is short of being officially being a low-pressure area. Its present wind speed is 15Knots/hr.
It is shown as 92B in the NRL site and this is forecasted to become a ‘low’ by the ECMWF, which will move northwards along the west coast of India, and, as per international forecasts, it will fizzle out somewhere around 15N, due to non support from the sea water temperatures.
I feel it may intensify a bit, creating cloudiness in the Arabian Sea, and, after the 4th. of November, bring some unseasonal rains along the coasts of Kerala, Karnataka and Goa. Rains along these regions may last a couple of days.
But I would wait and watch to forecast precipitation alomg the Konkan regions. Because, by this time, an active W.D. coming along would dominate this southerly system, and not allow it to "grow" further.
Also, another system within the same trough in the bay, would be required to share the available moisture along the trough line.
The north-east monsoon will till then continue to remain "feeble" and in a "low gear", in the T.N. and interior Karnataka areas.

An approaching W.D. is now keeping the temperatures high in the northern regions of the sub-continent.
Days in the western regions were very hot on Monday, with Chorr (Pakistan) at 38c, and Rajkot

and Veraval also at 38c. Mumbai was at 36.6c ! ( IMD map shows the heat clearly).
With the W.D. we can expect a reasonably good drop in the temperatures,starting from the nortwestern areas, and more effectively in the night temperatures from this weekend. Also, rains could be expected in the plains of northern India and lower and middle hills from 4th. for a couple of days. And ofcourse snow in the upper hills.
kapadias@gmail.com