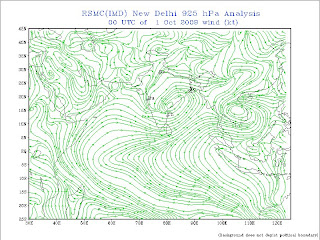 As on Wednesday, the well-marked ‘low’ in the bay held to its position of the last two days and is not showing any fast signs of westward movement inland. But the IMD streamline shows it partly inland as of today.
As a result, the system showed good cloud bands in its western quadrants, and the monsoon has been vigorous over Marathwada, south Maharashtra, coastal Andhra Pradesh, Telangana and north interior Karnataka while being active over konkan, Goa and coastal and south interior Karnataka.
27 cms of rain in Sangamneshwar, and 14cms in Ratnagiri were the heavy downpours in southern Maharashtra.
These late season rains in the overall peninsula regions are sure to be of great help to an otherwise weak monsoon.
Montoring the system now, at the coast off A.P, it is likely to move west, weaken, and bring rain along its path in the next 2 days.
Maharashtra, A.P. and north Karnataka will be the main beneficiary states. Around the 3rd. of October, coastal regions of south Maharastra and Goa can get very heavy rains, maybe upto 300 mms /day.
Northern regions will continue to remain dry.
International Model predictions also continued to predict westward movement but without time commitment. I feel, it should re-emerge in the Arabian Sea by the 3/4 October.
ECMWF predicts the prevailing well-marked ‘low’ may cross the peninsula and show up over the west coast around October 5.
Anyway, after crossing into the sea, we will watch and see if it gets "deeper", and in which direction it moves. If there is a north/west movement, coastal Gujarat may start getting heavy rains from the 4th. I would restrict the rains to coastal Gujarat, as inland penetration of any system, into Gujarat, around the 3/4th. is not possible. This is due to a W.D. "aloft", which may be over the Kashmir region around those days.
Also, all eyes on look out for the new low in the bay, remant of Typhoon Ketsana.
Mumbai: Having recieved some showers on Wednessday night, I think Mumbai can expect thundershowers on Thursday night in some areas. Moderate rain and showers can be expected too, on Friday/Saturday, with cloudy skies. Thundershowers can form in the evenings. With the temperature going down to 31c, it should bring some relief from the sweltering heat.
Mumbai has recieved 1761mm of rain in the 4 months of this rainy season. Of-course this is -264mm , and S'cruz has recieved 1971 mms, -294 mms. IMD ends its official monsoon rain count on 30th. September. But, on many occasions, as in this year, the monsoon season continues well into October.
And, October does recieve sizable amounts of rain too. The highest Oct rain for Colaba was way back in 1917, when in this month Colaba had 507 mms or rain.( No mean amount !). And not too far back, in 2006, Colaba recieved 246 mms of rain in Oct. S'Cruz got 238 mms that month.
So, we just cannot neglect the October rains for the seasonal totals, not till the monsoon withdraws from the city.

Thanks for the update on Mumbai, that is insightful. The BBC site shows very heavy rains for Mumbai around Monday / Tuesday. Looks like Mumbai might repeat the rain totals of 2006 October (as mentioned in your Blog). Although we all need rains I would personally want to see the back of this Monsoon soon.