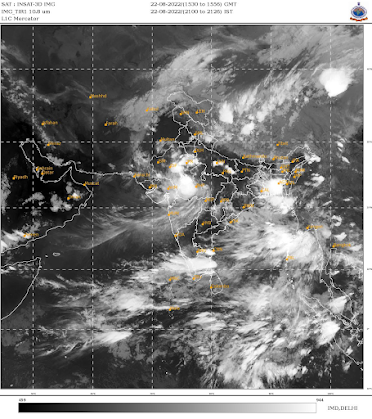 [Mumbai, Konkan and Goa: Occasional passing showers to continue, some maybe moderate to heavy. No major change in current weather. So, Mumbai Colaba remains in 4% deficit though SantaCruz is in surplus.

But no worries..Mumbai Lakes @ 96% Storage have 1 year's availability.

Pune: Pleasant weather with drizzles and light rain showers for next 2-3 days, reduction in rain and rise in day temperatures after 25th August.

All Pune Dams are at 100% capacity...comfortable position. ]

Mainly dry weather likely for Marathwada region, which would be beneficial for the crops.

Uttarakhand and Himachal Pradesh could see moderate rain/thundershowers in the low-mid Himalayan ranges. Upper reaches could get light snow.

Avoid travel due to chances of landslides/mudslides.

We await another low, BB-11, which could possibly form over north Bay and near West Bengal by 24th, but won't be as strong as BB-10. Rainfall could increase over West Bengal, Jharkhand and parts of north Chhattisgarh and east Uttar Pradesh. 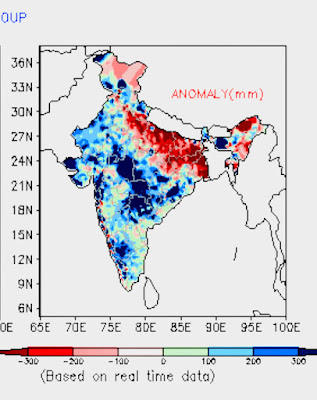 with only marginal improvement likely in next 3-4 days.

Weaker westerlies would result in increased chances of thundershowers over Bangalore region and parts of Tamil Nadu including Chennai and Pondicherry.

Hello SSET sir
Here are the rainfall stats from 1st June till date.

Lets hope that not just south India but the whole of India witnesses such droughts every year.
UP has missed out on the drought this year.