Monsoon Watch-12
The latest development :
Weather advisory from he JTWC:
"AN AREA OF CONVECTION IS NOW LOCATED NEAR 14.4N 87.3E, APPROXIMATELY 500 NM SOUTH OF KOLKATA, INDIA. A SLOWLY CONSOLIDATING MONSOON DEPRESSION IN THE BAY OF BENGAL. HOWEVER, THE CIRCULATION IS SOMEWHAT ELONGATED AND WEAK AT THE CENTER. CURRENTLY THE DEEPEST CONVECTION IS BIASED TOWARDS THE SOUTHERN SEMICIRCLE LEAVING THE NORTHERN SEMICIRCLE NEARLY DEVOID OF DEEP CONVECTION. THE SYSTEM IS LOCATED UNDER THE UPPER-LEVEL RIDGE AXIS, AND ENVIRON-MENTAL ANALYSIS INDICATES THE SYSTEM IS IN AN AREA OF FAVORABLE SEA SURFACE TEMPERATURES AND LOW VERTICAL WIND SHEAR. MAXIMUM SUSTAINED SURFACE WINDS ARE ESTIMATED AT 12 TO 17 KNOTS. THE POTENTIAL FOR THE DEVELOPMENT OF A SIGNIFICANT TROPICAL CYCLONE WITHIN THE NEXT 24 HOURS IS UPGRADED TO FAIR."

The situation is flexible now !

The streamline map shows the winds getting sucked into the circulation, and with the system getting stronger (forecasted to become a depression), the winds from the Arabian Sea are likely to get totally diverted towards the circulation. This diversion may occur till the system moves away northwards, at least above the 15N line in the bay. That means the strenght of the winds along the west coast are likely to diminish, and consequently the clouding, during the next few days.

The ECMRWF forecasts the depression as moving north, and hitting the Bengal coast by the 25th./26h. So, till then we have a sort of "diminished " monsoon activity along the southern parts of the west coast.

The monsoon , as a result, will move up the bay along with the system. The pressure chart from the Thai Dept shows a monsoon trough has formed joing the depression and the low in Thailand. 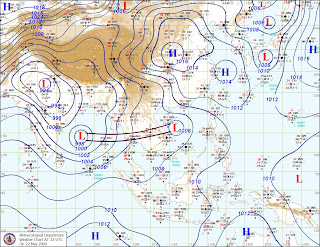 The seasonal monsoon low over the desert regions of the sub-continent is well entrenched, and the core getting deeper(994mb). The temperatures in the Rajasthan/Central India/Sindh region are around the 44-47c range. The highest in India being 47c. The nights are very hot in the Rajasthan region, with Jaipur seeing a LOW of 33.6c on Friday.

Meanwhile, the peninsula regions of the souh and interior Maharashtra continue to recieve pre monsoon thundershowers. Effectivly, this has kept the nights cooler around the normal to

slightly below levels in the region. See map showing the "cooler" regions.

Now, this summerises to the conclusion, that in the next 4/5 days, the monsoon will forge northwards towards the north-eastern states of India. should arrive there by the month end or before.

Along the west coast, a delay of about a week ,after Kerala. A low is forecasted by some international models in the Arabian Sea on the 1st. of June. If held true, it may be an instrument to pull the monsoon north along the coast.

Cyclone has developed. Look at this image
http://webflash.ess.washington.edu/L_plot_weather_map.flash4.jpg