The result of the "surprise" W.D. mentioned in the last blog has been sudden and useful rains in Rajasthan and Sind, besides several areas of north-west sub continent. The image below justifies this.
Also, as expected, the normal July rains continued all along the trough line, running thru central India, which included the regions of Gujajrat, Maharashtra, M.P. and southern states of Karnatak and A.P. Resultantly, with good rainfall around Marathwada and A.P.,the deficit rainfall ares are racing towards normalcy. Image shows the accumalated rainfall of the last 3 days.

I thank Cmdr. Potey from Lonavala for providing me with the rain amounts of Lonavala. The rain at Lonavala which was in the deficit upto 25th. July, suddenly raced towards normal levels, and by the end of July, the total rain from 1st. June there was 2424mms ! Short of Mahableshwar by about 150mms only !
Today, 0n 5th.August, a low pressure is moving fast after entering the east coast of India. I

t is weakening fast, and is expected to move along the trough line. (The streamline map above shows the troughline as joining the two lows across cental India). Good and moderately heavy rains are expected in the next 2 days along this line, with the west coast, north of kerala, to get rather heavy rains from Wednasday thru Friday. Mumbai may get very heavy rain about Thursday.
After this, a new low is expected on the 9th. in the bay, off the north A.P./Orissa coast. It should move along along the same lines as the current low, as I expect the monsoon trough to remain around the same region for the next 15 days.
A good summing up of the next weeks rain is shown by Ashokbhai in his forecast at http://www.gujaratweather.com/

The western end of the Monsoonal trough has moved north as per IMD, looks like the trough is begining to again move north, which means in the next couple of days we may again have lessening of rains around Mumbai. The weekend though appears to be a washout. IMD has also forecasted some kind of a vortex forming our Gujarat around 9th Aug 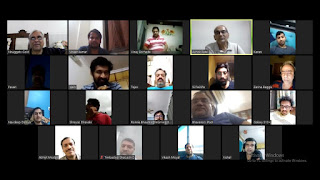