The lowest latitude for seasonal sea ice formation in the world...See International Page

J-1 Effect...Precipitation as on Wed Morning. More details from Pakistan with Pics in Vagaries Pakistan 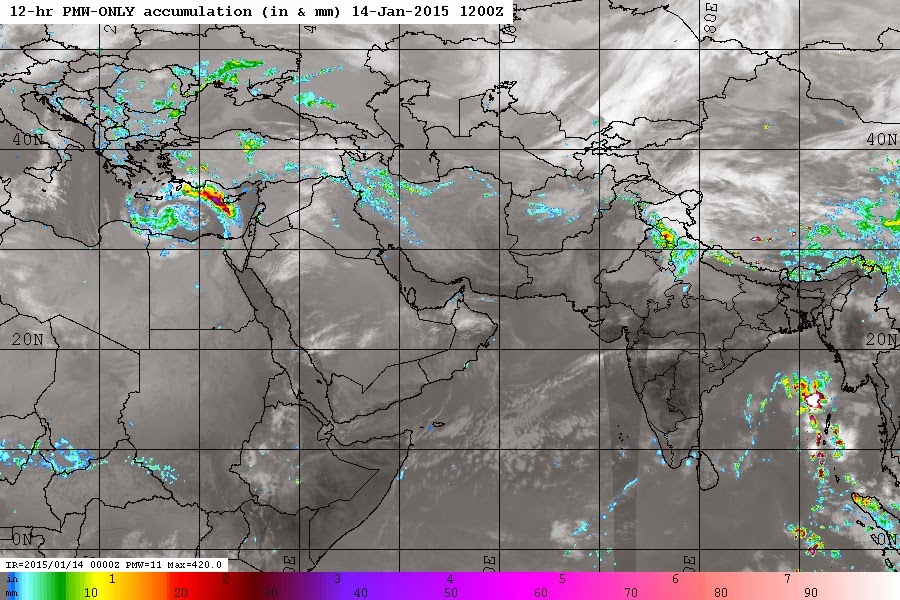 J-2 is approaching around the 19th of this Month. As indications show, it will be fairly strong and effective South till Sindh in Pakistan and Rajasthan. But, we will gauge its precipitation and movement in a few days as the upper trough shows its depth.

Cloud Streets over the Black Sea. An Overview from Space...A Must See for all Meteorologists....See Space News Page


Light rains in many parts of Northern Pakistan on 13th...Islamabad AP recorded 10 mms in the day. Lahore with traces saw a cold day at 13.5c as the maximum. Murree had mild snow.
Rains now approaching North India as on schedule....!!

Delhi NCR had a cold night...Lows shown by Arpit in Comments.


Current WD J-1 has started precipitating. Next, J-2, expected to be fairly strong and approach Pakistan (North and Sindh) on 19th/20th Jan and move into India.

Mumbai on Tuesday saw a high of 32c at Santa Cruz and 31c at Colaba.

Vijayapura has recorded lowest minimum temperature of 6.4 deg Celsius today, the 13th
January 2015 which is the lowest recorded for the month of January during last 123 years.

Haveri has recorded lowest minimum temperature of 7.4 deg Celsius today, the 13th January
2015 which is the lowest recorded for the month of January during last 11 years.

Dharwad has recorded lowest minimum temperature of 8.5 deg Celsius today, the 13th January
2015 which is the lowest recorded for the month of January during last 11 years.

13th January:
A WD will be approaching the Northern parts of the Sub Continent from 13th January.
Rains in North Pakistan plains (Islamabad showers on 13th, around 10-15 mms. Gujrat also gets showers ), and snow in the Hills  expected in Pakistan on 13th night. Parts of Upper Sindh may also get cloudy weather and light rains.
Cool days with Lahore and Gujrat around 14c as max.
Rains/snow in Kashmir and Upper reaches of HP.

The Rains move into North India plains on 14th.

Rains and cloudy weather expected in North MP (Gwalior) Heavy snow likely in middle reaches of Kashmir (Gulmarg/Pahalgam) and in Srinagar. HP and Uttarkhand Stations get rains/snow.
Day will be cold in Punjab.

15th January. Precipitation moves Eastwards, and restricted to HP Mountains and parts of Upper Uttarkhand.
East Winds in UP, Haryana and North Rajasthan from Thursday.


Cold conditions in Punjab, Haryana and UP next 3 days.

Cold Conditions in Marathwada and Vidharbh abate from Monday 12th.

sir,will it be cloudy in konkan also.what about the system coming up in south india near 16th jan

abizer: Few high clouds in Konkan..not much. An Easterly wave in South. Will mention in next update.

As per vagaries forecast...its raining in diff parts of pak punjab,,,kashmir and Islamabad since noon... My area getting light to moderate rains with breaks...