The UAC system which crossed into Orissa on the 3rd Aug, now lies as a UAC at 700 mb over South-East U.P. and adjoining region. Precipitating fairly good rains in M.P. and south U.P. areas. On Friday, daytime, Bahraic recorded 42 mms. Similarly, rainfall was fairly good along the monsoon axis. Central regions of the country received good rainfall as a result. Moderate rains were seen in H.P. and Delhi regions on Thursday/Friday.
In short, good rainfall has occured north of the axis as mentioned in the previous blog.
Now, what to expect for the weekend: Sat/Sun ? Slowing Down ! The seas around the Sub-Continent have entered into a weakening MJO phase. 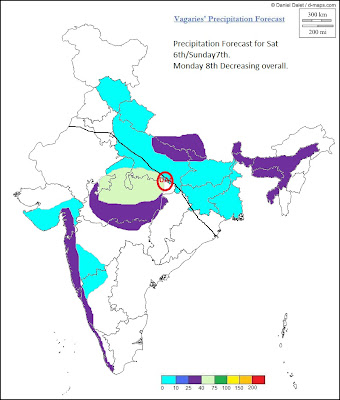 Saturday/Sunday:
Some heavy showers lingering in M.P.region ( more in the western region, Bhopal and Gwalior) till Sunday, due to combined effect of UAC and axis. Central Nepal will see very good rains on Saturday.Kathmandu, which saw 23 mms on Friday, would get another 25 mms on Saturday, before reducing from Sunday.
A heavy bout of rains could be expected in the NE states and W.Bengal as the eastern end of the axis moves north on Sunday.
But, as anticipated, decreasing rainfall along the Konkan and Karnataka coastline. And almost dry, to very scanty rainfall in the interior peninsula (Mah/Karnataka/T.N. and A.P.) south of 20N.
Very little rainfall of any meaningfull recording in Gujarat, and reducing rains from Friday in South Gujarat.
W.D. has moved away, so most of extreme North India and almost the entire Pakistan will be devoid of any meaningfull rains.
Monday/Tuesday:
See a dryish interior peninsual south of 20N and a little more decrease in Konkan and coastal Karnataka.
Northern regions of India and entire Pakistan would be almost dry.

Mumbai: Saturday/Sunday: Partly cloudy and sunny. Few passing showers in some areas. Day temperatures tending to rise on Sunday, and could be around 32c. Rain amount 10-12 mms.

Monday: Partly cloudy, again with sunny spells. Hot in the day, with a couple of regional showers. Rain amount 10 mms

Pune: Weekend: Light clouding, with sunny spells. Drizzle in some parts of Pune. Days will tend to get warmer on Monday.
By Rajesh at August 05, 2011

Thanks Satyen.
Emkay, put up the latest on ENSO.
You know my views on Global Warming by now...there is nothing like Global Wrming..its all humbug...have explained my stand with supportings in a 4 series blog in Dec 2009.
Putting up another note tom.

Business Line has just put up Dr. Akhilesh's views.And Dr. Akhilesh does give his personal views to the paper occasionally.
Number of systems from the bay are less in the last 2 seasons only. Cannot link it to the so called GW.