As the recent low fizzled out over Sindh Pakistan, its remnant, a UAC remains over North Gujarat and adjoining Sindh.
The UAC at 700 mb, is expected to remain over the region on Sunday.

As a result, expect heavy rains in Saurashtra, and parts of Kutch and rest Gujarat on Sunday. Bharuch may continue getting rains on Saturday night, and then some showers on Sunday.
System will move slightly west on Monday. Rainfall will be fairly good on Monday in N.Gujarat and Kutch.

Bordering Sindh (Southern) will get the benefit too. May just elude Karachi of meaningful rains ! 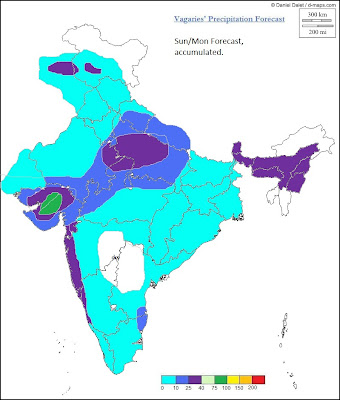 As BB5 hovers over Jharkhand/U.P. /M.P. border, it would be in order to expect precipitation in the corridor conecting the 2 systems.
Shown in Vagaries map.
Delhi can again get some good monsoon showers Sunday and on Independance day.

Almost dry/cloudy weather is expected in the Madhya Mah, Marathwada and N.I.Karnataka regions.

The rain frequency increased in Mumbai from Saturday evening, with heavy showers lashing the city from 8 pm. ( The expected -20 deep vortex had developed by Sat.) Though vagaries had expected the increase during the day itself. I presume the estimated 25 mms will be covered in the night ( 10 mms till 10.30 pm).

Sunday forecast is maintained, :" Cloudy and overcast. showers will be frequent, with a couple of them heavy in some areas. Rain amount 25 mms." I shall add: With Gusty winds during the showers.

Pune: Sunday will be partly cloudy with a drizzle in some parts. Rain amount 3 mms

: Had some 4 mms of rain on Saturday, but a shower or two overnight, and cloudy weather on Sunday. Rain decreases on Sunday.

“Keylong town and the nearby hills have been experiencing snowfall since Saturday morning”, receiving 4 cm of snow till 8.30 a.m.

The high hills like the Lady of Keylong and the Seven Sisters in the were enveloped in snow.

Rohtang pass has received more than one foot snow and the entire Lahaul-Spiti district has been covered with a thick blanket of snow. Manali-Leh highway has been blocked following heavy snowfall on Rohtang and Baralacha-la.

In Karachi we had our first Heavy thundery shower with strong fast winds, yesterday night :)))

Pavan: Thanks for the info and reports.
Figures show Gulbarga got no rain at all. Darwad, Gadag and Haveri in N.I.Karnataka received 1 mm.HYD measured 22 mms.South of Satara, Khlp got traces and Belgaum 9 mms.
Sure we have to preserve the fauna of the w.Ghats. Otherwise, even if it rains heavily, it will cause immense flooding in the plains below due to non retension of the rain water.Trees are def. required.
Man's doing may not so drastically alter climate, but interfering with nature like tree cutting and wiping out grasslands will cause severe damage, like we saw "reverse"floods in Karnataka few years ago.

Rehan: Happy to hear that..could be an extended streak from UAc as we had expected rains in southern sindh area, read some 20-30 mms in different areas ?

What will be the future of the low air pressure, which is over central INDIA, IS it going to hit Gujrat and Sindh again? ? ?

Many other heavy rainfall places which receive rainfall above 4000 mm such as Buxaduar, Matheran, Passighat, Devala and Shirali have got below normal rains so far.

Places such as Tamini, Lonavala, Hulikal, Nilkund, Mawsynarm, Amboli and Castle Rock would have also made it in the above 3000 mm list.