The series of W.D.s flow continues into April. With the approach of the latest W.D. by the 2nd. the hills of Kashmir/HP will get renewed rains and the rain belt should spread eastwards into the eastern Himalayas the next day.

This is having an unusual effect on the plains and the central Indian regions. With the moving of the W.D. east, 2 high pressure areas have been created on either side of the Indian peninsula. This is causing strong winds to blow southwards, thus preventing the normal sea breeze along the west coast, and resulting in the central regions of India getting over heated . The map shows a very hot "tongue " of above normal temperatures in the region (with Nagpur at 42c today), and a clear north-south divide, with the north still in the "normal" range. Akola was 41.5c today, with several 40s seen in the region.

On their approach, the systems are causing unusually heavy, and continuous rains in the U.A.E. Dubai had a heavy hailstorm last week, and the temperatures have dropped from 38c, last week, to 28c. Muscat, too has been recieving fairly good amounts of rain, and can expect to get precipitations till the middle of this week. 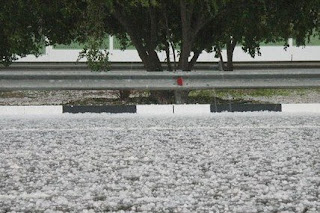 The nimbus cloud pic shows the intensity of the storm, and the extent of hails in Dubai. 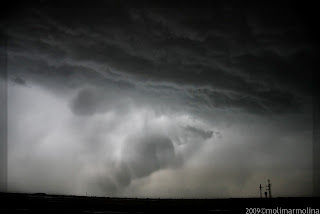 Still too early to estimate the effects of these systems on the monsoon. Normally, the W.D.s, should reduce from April, and reorganise the wind pattern to the normal April winds.
But , excessive heat at this time in the Maharashtra / Gujarat areas may create sporadic thunderstorms in the 2/3 week of April. This may cool down the land mass, and could delay the starting of the "low pressure" formations.
But, again, its too early to decide or conclude things yet.
I think, it would be appropiate to start the "Monsoon Watch" from my next blog on the 3rd.
kapadias@gmail.com

With the approach of the latest W.D., scattered rain has been recorded throughout the northern regions. Delhi had a light drizzle today. As a result, finally the temperatures in the entire Indian region has now come down to near normal levels. Todays day temperatures in the map show a lone 40,( compared to 41s and quite a few 40s last week, or the last 15 days).
Map shows the

temperature variation in the sub continent for the first half of March.

Most of the northern areas are now in the mid 3os. Quite normal for this time, 3rd. week of march.
Now, another W.D approaches the north, and by mid week, we may see rains in the western Himalayas, and some rain in the northern plains mid week.
A "low vortex" is forecasted to develope in the ghat regions of north Maharashtra. The hill stations of Lonavla, Pune, and Mahableshwar can get some rain around Tuesday/Wednesday.
Due to a trough, some light rain is likely next week along the Kerala and south Karnatak coast.
Next blog will be posted on 30th. March.
kapadias@gmail.com

Observe todays maximum day temperatures in the map. The heat wave has spread north, with many a stations recording temperatures in the mid-30s. The 41c in the central area is at Akola (Mah.).
Now, with a couple of circulations forecasted to form in the central peninsula region (over Mah.), the next 3 days should see rain/thundershowers in Maharashtra and north A.P./Karnatak. My friend in Mahableshwar informs of a thunderstorm there today. Reports of rain today are in from Pune and Kolhapur in Mah.
This formation and situation is mainly due the excessive heat prevailing since the last few weeks, and the southwesterlies in the lower levels.
Mumbai can recieve a thundershower on Saturday/Sunday evening.
Resultantly, the entire region (of Mah. and A.P.), now overheated, should see a fairly good drop in the day temperature from Saturday. I think, the temperatures in the central region of India, that is the peninsula region, should see around normal days till the 25th.of this month.
I forecast this cooling down for the next 10 days, as a few international models have forecast a fairly strong W.D. approaching northern India from the 17th. The rains are likely over the hills of northern India from the 17th. and should be fairly good over the plains from the 18th./19th.
The plains of Punjab and Haryana and Delhi too can recieve welcome showers around the 20th.
The entire region will see a drop in day temperatures after the initial summer heating had started. Delhi was 35c today (13th.)
The W.D. is expected to linger on in the western U.P. region till the 22nd.
In the south, a ligering "vortex", is expected to bring and precipitate rain in Kerala during the next 3/4 days.
No, this is nothing connected with "Global Warming" (I am hearing too much of it), and as far as the monsoon is concerned, its too early to say anything, We still have the full throttle of April heat coming.

Not writing much today on the same heat wave, but taking the liberty to reproduce a report from the DNA (7th. March) on the "hot" topic:

The heat is on in March: Jaideep Hardikar (Saturday, March 7), Mumbai:
"The entire central and northern India is experiencing a heat wave, with summer setting in about a month in advance, regional Met officials say.
For about a week, central parts, including eastern Vidarbha, have been recording on an average 7° celsius higher-than-normal temperature.
On Thursday, Gadchiroli recorded one death due to simmering temperature. Met officials have officially declared a "heat wave" in central parts, including six districts of Nagpur division, in an indication to people to protect themselves from the sudden rise in temperature.
Normally, the mercury begins to climb in the last week of March, as the month steadily unfolds the transition to summer from winter. "It's an unusual phenomenon that was last seen over a hundred years ago," the regional director (meteorology), Nagpur, PA Nandankar told DNA on Friday.
The early onset of summer follows one of the warmest winters in India in the last 100 years, according to the Met officials. The cold wave from the north did not arrive at all in the central and southern parts of the country this year.
"We are experiencing a multiplier effect, but this phenomenon will recede over the next couple of days and mercury will calm down," Nandankar said. "There was no cold wave from the north to mix with the dry and hot air in central and southern parts, which is why the current temperature is well above the normal."
Nagpur, for instance, has already touched 40° celsius on Thursday, 39.6° celsius on Friday, about seven degrees above normal, a trend that doesn't get reflected in the past several years of data.
The highest temperature ever recorded in the month was way back in 1892 on the 28th when the mercury touched 45 degrees.
Amidst indications of hottest summer ahead is another bad news. Vidarbha is facing the worst ever water scarcity in April-May. As ofFriday, the average water level in all the tanks and dams, according to the irrigation department, is at a frighteningly low 17%, which is receding fast every passing day.
Several villages and semi-urban towns have been getting drinking water on alternate days, or once in every three or four days.
Tanker water supply has been started from Friday."-DNA.

Anyway, the winds have now shifted, and come directly from the north-west "corner" of the sub-continent. Resultantly, temperatures have started falling a bit.

Feeling hot, hotter and hotter !!! Thats the weather in almost all the regions of India. After an unusually mild winter, summer has made a sizzling begining all over the sub continent. Due to the continuous passages of W.D.'s in the far northern areas, the wind patterns have set over the plains blowing hot winds without the cooling effects normally picked up from the snowy hills. The streamline map from IMD of the 3rd. clearly shows the wind flow.

The summer season in the Indian region is officially stated to start from the 1st. of March upto the arrival and commencment of the monsoon in the various states. From the 1st. day of the summer season, the day temperatures have been 6-8c above normal. With exceptions like

Mumbai in fact has been hot and above normal since the middle of February. And since Marc

h, the days in the suburbs are at 37c and 35c in the city. The diagram of the last 30 days shows the red areas after mid-Feb.
kapadias@gmail.com
By Rajesh at March 03, 2009 No comments: