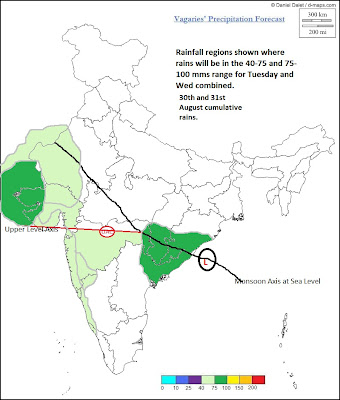 "The UAC over Orissa persisits and may descend as a sea level low."--That was vagaries yesterday, and now on 29th, we have a low, 1002 mb at sea level off the North A.P./Orissa coast. Low is expected to remain in present position for a couple of days.

What it will do is , pull the western end of the sea level monsoon axis a bit southwards, and what can happen is, the upper level axis can merge with the sea level axis, and form a sort of "elongated "low over South Rajasthan and adjoining Sindh.

Result will be good rainfall (see vagaries map) next 2 days over S. Rajasthan, Kutch, N.Gujarat and along the axis line. We could see good precipitation in coastal A.P. and Orissa due to the low.

Rainfall over the Konkan and south Gujarat coast will return to "normal" levels from Tuesday.
Places in South interior Mah. could see a cumulative precipitation up to 75 mms next 2 days.

Lower Sindh will receive precipitation from Tuesday thru Wednesday. Rains could be heavy along the coast . Karachi can expect rainfall from Tuesday thru Thursday. Wednesday could see some heavy showers in certain areas, and rainfall could measure about 20-25 mms.

As expected, rains north of the axis have been negligible, and with the axis probably shifting a bit more (South), i see fair conditions for the next 2/3 days in Northern India (including Delhi).
RK reports of fair and clear weather from Delhi. Kathmandu will continue with the current thundershower (on some days) in the evening, with partly cloudy days.
Neeraj mentions of evening thunderstorms in Kathmandu. And both ask if this is a sign of monsoon withdrawal ?

The first monsoon withdrawal starts from regions of Eastern-most Pakistan and Western Rajsthan, and the earliest indications are the formation of a high (clockwise) at 700-850 mb level. So, we will wait for the current developments to "rain off' and cease. Shall discuss this after a few days again.

During the day, Monday, was drier than the previous 3 days.

With a reduction in rain intensity, it will be a breather for the authorites (to re-organise their priorities) and Mumbaites in general .Cloudy skies, with a few bright intervals. 4/5 Brief passing showers, a few heavy. Rain amount (average) 25 mm

as usual u have the courage to stick ur neck out while the cowardish IMD just reacts to events. they have issued heavy rainfall warning for next 24 hours in Mumbai. Just read what IMD Mumbai chief said on 26th.
http://www.hindustantimes.com/Rain-after-a-dry-spell-provides-respite-to-city/Article1-737801.aspx

Spot on Target rajesh. Thunderstorm.started Monday evening and now at 11pm some spectacular lightening.and thunder cowed by heavy rains.at short intervals. I admire your forecast and want to.one.day be like you :)

Rajesh - september will monsoon withdrawl commence??? OR again back to terrible UACs,Vertexs.