Todays posting for India Weather : 27th.Feb.
- no W.D.system in sight till 6th. Mar. Hence dry weather for all of north/central India till 7th.
- no major wave for south till 6th. Hence dry weather till 7th. But mild incursion of moisture,and partly cloudy weather will prevent temperatures from rising too sharply.
- dry and easterly winds in first week means substantial rise in day/night temperatures for the full country.
- ridge aloft will remain in place, preventing any major development in the north and central region.
-MSL remains high.
- rise in temperature will be prominent in central and west Rajasthan.

The temperatures have started rising today. The max. temperature map shows the north-wes

t region and central areas of India going into the mid-30s. But just observe the west coast of India. Mumbai at 38c, and other coastal towns around 36/37c ! This is due to the sudden gush of easterly winds.

In the previous blogs, I have discussed and mentioned of the extremely cold conditions since Jan/Feb in the sub-continent. Unusually low, and record temperatures, were of the order since Jan. and mentioned several times in my blogs.Thus this year becomes one of the coldest and a long winter for the sub-continent. Normally hot and muggy Mumbai too had a "winter" ,with temperatures going down to 8c,and normally cold regions like north Kashmir touching -29c at Leh.

Well, the point here is, this year's winter was not restricted to this region, but its severity was almost all over the Northern Hemisphere.
Across much of the northern hemisphere, from Greece,Iran to China and Japan, they have been suffering their worst snowfalls for decades.
Similarly freakish amounts of snow have been falling over much of the northern United States, from Ohio to the Pacific coast, where in parts of the state of Washington up to 200in of snow have fallen in the past fortnight.
In country after country, these abnormal snowfalls have provoked a crisis.
In China the worst snow for 50 years triggered an unprecedented state of emergency. In Afghanistan, freezing weather (-22c) and the worst snow for 30 years have killed more than 900 people. 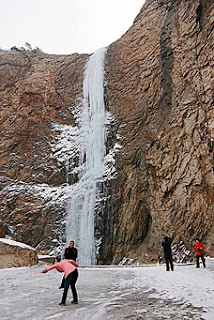 In neighbouring Tajikistan, the coldest winter for 50 years, along with soaring food prices and a massive energy crisis. (china picture)
In Greece and Turkey, where temperatures dropped as low as -31c, hundreds of villages have been cut off by blizzards and drifting snow. Athens was covered in several centimeters of snow and the outskirts were cut off due to heavy snow and ice on the roads following two days of snowfall.
In Israel, Jerusalem were treated to another rare sight of snow. This is the second significant snow fall to descend on the City this year. While snow is often seen across other parts of the country, it seldom settles in Jerusalem itself. However this morning it is reported that snow lay to a depth of 5cm in places.
In Iran, following heavy snowfalls last month, its eastern desert regions - normally still hot at this time of year - have seen their first snow in living memory.
In Saudi Arabia last month, people were amazed by the first snow most had ever seen.
On the Pacific coast of Japan last week, heavy falls of snow injured more than 50.
And, a spell of cold weather in northern Vietnam has killed nearly 60,000 cattle and destroyed crops. The ongoing cold spell started on 14 January, beating the 31-day record set in 1989. Temperatures have sometimes dropped to below 10C. In two localities, a temperature of -2C was recorded.
Alpine ski resorts have seen their best snow conditions for many years.

Now, what is the result and effect of this :In light of such frezzing news from so many places round the world, it was not seem surprising that U.S. satellite data for January shows the extent of snow cover in the northern hemisphere as reaching its highest level since 1966, 42 years ago - and that temperatures were lower than their average for the whole of the 20th century.

And that the "little" big freeze is not restricted to the northern hemisphere !Following last year's freak snowfalls in such southern cities as Buenos Aires and Sydney, and RECORD CHILLY TEMPERATURES have sent residents in Kalgoorlie (Austrailia) and other parts of Western Australia reaching for the blankets. Kalgoorlie has experienced the extremes of weather over the past five days with Wednesday’s chilly 15.1C maximum and 15C on Tuesday setting a RECORD LOW FOR FEBRUARY. The previous lowest temperature in the mining town during February was 16.4 C in 1993. The mercury has taken a massive dive since Sunday when the maximum reached 41C. On Monday it was 34.6C. Kalgoorlie’s average for February is 32C. “To be as low as 15C, that’s REALLY REALLY UNUSUAL.” OTHER RECORD LOWS were recorded in the Gascoyne region, Midwest and Southern Cross. Cooler winds from the southeast and extensive cloud, along with the impact of Tropical Cyclone Nicholas, are blamed for the colder weather.
As a result, ice cover round the Antarctic is at its greatest extent for this time of year since data began in 1979, 30per cent above average.

I refrain from drawing any long-term conclusions from 2008's great freeze. But it is one of the most startling developments to have emerged in the world's weather patterns for a long time - not least in that it was so unexpected.The amazing feature of this great freeze is how little it was predicted.
kapadias@gmail.com

As discussed in my previous blog, dry weather has prevailed over the sub continent. Now, I do not see any change in the precipitation situation, and with only a feeble W.D. passing over northern Kashmir on 22 Feb, no rain is expected over most parts of India and Pakistan till the 29th. at least.

Well, that means a gradual rise in temperatures now onwards. They have risen to near normal levels over most regions of the country, and show a slight "above normal " trend towards the north-west.
However,my estimate, based on past experiance, is that the day temperatures will gradually start rising, begining from Vidarbh region of Maharshtra, 22. feb.onwards. Places in that area of interior Maharashtra will reach 35-36 c around the 23rd.. By the end of the month, as the weather remains dry, the winds turn east/north-east in the central areas of India. Hence, north interior Maharashtra and western parts of Gujarat will touch 36/37c.
kapadias@gmail.com

Last month , a large portion of the mid-East was in the grip of a cold spell.The Jan map indicates this.


The severe cold had affected the entire Sindh region ,Gujarat and northern coastal Maharashtra to a major extent. The reason , as explained in my previous blog, were the strong northwesterlies. The other regions in the grip of the cold are seen in this map . Quite a large area wa

s in the grip.

Though abated from the Maharashtra region, night temperatures are still 3/4 c below normal in Gujarat. (Rajkot at 9.5c is 4 below). However, the intensity of cold still prevails to a greater extent in Rajasthan, Delhi and Punjab. It was 3.2 (-8c) at Jaipur and 4.5c at Palam with Amritsar the lowest in the plains at -1.1c (all temperatures on 14th.) Further north, in Kashmir , Pahalgam was -16.2c and Srinagar -6.4c on 13th.

The winds having changed direction now, with the passing of the W.D. the cold from the northern areas should abate in a day.

Day temperatures can rise a bit sharply in Gujarat and Maharashtra within a few days.

The precipitation in the south and east coast will fizzle out in aday. The upper air circulation over south Maharashtra can give very light rain in south Maharashtra and north interior Karnatak and Goa, but only for a day on 15th.

With no major system expected till at least the 20th., dry weather can be expected in most of the country from the 16th. to 20th.

The entire northern and central areas of the sub continent have been in the grip of a severe cold wave since the last 25days. Almost at a stretch ! New records have been created with several places recording their lowest ever, or their lowest in many years. Citing some new lows (either all time or for Jan/Feb). Adampur at -4c, Amritsar at -2c, Mt. Abu at -3c, Nawabshah(Pakistan) at -4c, Nalliya at 0.4c, Mumbai Santacruz at 8.5c and Mumbai Colaba at 11.8c.
Some of the unusual events of this winter was a prolonged period of very low temperatures in most of the region during Jan and Feb.Freezing 0c at Chandigarh, and frost in Delhi, Mahableshwar and at Nalliya( Kutch). Freezing of the lake in Mt.Abu and very low temperatures of -16c for several days at Pahalgam.

The cold spell, a result of a series of 2/3 W.D.s, back to back, still holds on. In fact, with the passing of the last W.D. from the northern region yesterday, on Saturday, the cold is expected to prevail in northwest and north India/Pakistan. Cold, or below normal temperatures (using the appropiate term), during the day and night, can be seen in the day and night maps above.

But, taking into account the fact that we are now nearing the third week of February, the temperatures should rise from the 13th. With no further W.D.coming, and the high pressure ridge aloft holding on, the cold "shield" will be broken by the 13th. and the mercury will reach the normal level quite fast.
Near normal temperatures will rule over central and norhthern India from the 13th. onwards. This would in effect mean, that it will feel more "hot', as the rise will be from a below normal level to normal.

For the southern states, a curving of the east wind will mean some rain in Tamil Nadu and coastal A.P. Due to the easterly penetration, there can be some rain in Kerala ( especially southern region), and interior Karnataka. But the rain will be short lived, for a couple of days, and not very heavy.
kapadias@gmail.com
By Rajesh at February 10, 2008 No comments:

A mention of the record cold in Mumbai is a must.

Since mid Jan., Mumbai is having a continuous trend of below normal temperatures. The cold spell of 25 days, has broken a few records this year.


- Santacruz recorded its coldest ever Feb. on 6th. when it touched 9.4c.


- Santacruz beat the same 2 day old record on 8th. when the temperature fell to 8.5c.


Alongwith, Gujarat and Rajasthan have experianced a cold wave , but only from 1st. Feb onwards. In Gujarat, the lowest was at Nalliya, 0.4c and Mt. Abu in Rajasthan recorded -3c.

The cold winds have crept into Gujarat, Rajasthan and north konkan from the northwesterly direction, that is from the sindh/baluchistan regions of Pakistan. As a result, that region too has experianced severe cold in the first week. Karachi has had a low 0f 5c on 8th. and 9th. Feb. Nawabshah recorded its lowest ever temperature of -3.5c on 8th.

With the moving of 2/3 W.D.s, the entire belt of hills of north India had very excessive snowfall in the first week of Feb. Temperatures too fell, and Leh had a max. of -6c and a minimum of -29c on 2nd. Feb.

With the W.D. now having moved away, very strong northwesterlies are expected to bring in cold wave conditions in the northern regions of the subcontinent from the 10th.
kapadias@gmail.com