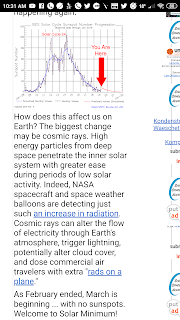 For more climate and weather related information please refer my blog below
https://weatherfanatic.blogspot.com/

The El Niño–Southern Oscillation (ENSO) is currently neutral, but sea surface temperatures in the tropical Pacific Ocean have continued to warm. The Bureau's ENSO Outlook remains at El Niño WATCH, meaning there is approximately a 50% chance of El Niño developing during the southern hemisphere autumn or winter, twice the normal likelihood.

Tropical Pacific sea surface temperatures have warmed over the past fortnight, and have touched on El Niño thresholds. This rapid warming was largely due to a period of weakened trade winds, associated with an active period of the Madden–Julian Oscillation (MJO) and the impacts of tropical cyclone Oma and typhoon Wutip. These trade winds have now returned to near average as the MJO has moved eastwards, suggesting that ocean temperatures may also ease over the next fortnight.

Five of eight climate models indicate the central Pacific is likely to reach near borderline or weak El Niño levels during autumn, with four models remaining above threshold levels into winter. However, El Niño predictions made in early autumn tend to have lower accuracy than predictions made at other times of the year. This means that current forecasts of the ENSO state beyond May should be used with some caution.

El Niño typically results in below average rainfall for southern Australia during autumn and for eastern Australia during winter and spring. The March to May climate outlook, which factors in ENSO and other climate influences, indicates autumn is likely to be drier than average for the eastern half of Australia.

My GOD ! Heat wave over South East India - Rayalseema, Anantapur touch 40c + !
With 3 years of successive drought due to failure of NEM worse than desert

In next 5 -10 years Bangalore will have no WATER ! Already lost 80% of tees and lakes. India most unlivable city! Bangalore is very close to Rayalseema (which is in near desertification).

Thank you so much,
Now I have something to read during the holidays. This will take a while but well worth it like always
You can read another one here Besttoolsbrand

Thank you so much for sharing this worth able content with us. The concept taken here will be useful for my future programs and i will surely implement them in my study. Keep blogging article like this.
CRM Solutions