The Myth of Global Warming. Things Everone should Know: ....Part 1.

It has started all over again ! Come Summer , and you hear it !

This so called Global Warming Fashion doesn’t seem to be fading away.

When will this hysteria stop ? When will we realize that there is no such thing as Global Warming and its totally hyped ! Its political, its made up .

But, let us remember, that Nature is gigantic, and the planet’s weather system is too huge to be disturbed and “altered” by mankind’s petty inventions. Lets get it out of our (Egoistic Mind) that we are controlling and altering this vast Global Weather System.

Alas ! We have not even understood it fully, and year in year out it is proved we are at Nature’s mercy.

Mankind’s development is too minute to alter gigantic systems like Global Monsoon and systems formed by seasonal changes.

Sure, what we change is the urban weather, We have created only urban changes, or urban warming. Congestions in major cities have altered (to some extent) the temperatures in growing cities. But in the city limits. Once out in the “open” we feel the fresh country air and cooler climes . Whither GW ?

In fact, even this urban “try” by man to alter weather fails sometimes. When confronted, we have recently seen severest cold spells in all U.S. cities last year (2010). And the coldest Christmas in London last year.

Why point to GW ?
Funny how a lack of warming is attributed to 'natural variability' but warming always seems to attributed to mankind'

This warming and cooling trend is natural, and going on (undisturbed) for years. The weather is normally doing something unusual somewhere.

Our memory of events from years ago tends to blur into the mists of time. Furthermore the global nature of today’s news media often brings to our attention stories which we would not have even known about if they had happened decades ago. I have therefore put together the record of extreme weather events , which I hope will provide a certain amount of perspective when looking at what is happening today. Events mentioned date back 80 years back, assuring that GW discussions are hyped up and exaggerated today. 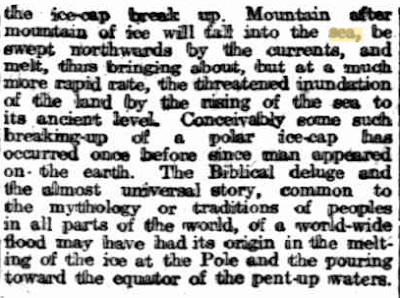 We need more data,we cannot predict anything concrete looking at just past 100 years of data (for data before that scientists rely on ice core sample, or bog sample (?), or something like that, which is more guesswork than real temperature data.)
One thing i find fascinating about this theory is that the rest of the world will warm up by so many degrees Celsius but the western Europe and esp Gr. Britain will cool down considerably , there will be a sort of an ice age there because the Atlantic conveyor belt will stop. The Britishers would have loved a bit of warmth for a change, but its an ice age in store for them.. Is it like we don't want it to be hotter than it is now, but its going to be hotter. And for the Brits, its the other way round ??

"Sure, what we change is the urban weather, We have created only urban changes, or urban warming."

Are you sure we wouldn't be able to scale it up?

Anyhow, this discussion is bordering on insanity.

Cold winters and cool summers - Someone else screams about the cyclical nature of the weather.

Congrats "Professor" Rajesh !! Insightful blog on GW !!
Btw todays reports carry a news that ECWMF models suggest cyclonical whirls near South Gujarat and in Upper Bay soon ?
So the sunny period for Mumbai may be shortlived is it ?

I like you to attend a international conference in Mumbai Oct 14. If you can help with the organization, that will be great too. I can put you in touch with the organizers

And if you could publish the details of the call for papers and circulate it among individuals interested, would be grateful. The link is provided below:

Write to be in my email address

It is just recently that we are somewhat better equipped to understand the effects alone of the weather and much longer to go into causes!

what we have encountered is destruction of natural habitats, uncontrolled human population and its stress on resources which needs to be seriously tackled as national policy. On one side we need prosperity and another to preserve what we have but sadly.........its always bogey of GW under which we are completely disoriented.