The heat has now really caught on in India. Abnormal temperatures, equal to end March readings, are now prevailing throughout the Indian plains of the north, central and south.
Temperatures have touched the 40c mark. Normally, as per my personal observations, the first 40 is normally reached in the Indian sub continent in the 5th.-10th. March period. On 25th. of February this year, Bhubaneshwar in Orissa reached 40.4c. Brings to memeories the killer heat wave of Orissa a few years ago, when it was 50c at Titlagarh. On the 25th. Titlagarh was 37.4c.
Yes, it is a heat wave now too,with temperatures 6-8c above normal !!

Todays, 27th. temperature map shows no respite. A single 40, and a few 39's. The nights are almost unbearable at 8 above normal. This link of IMD shows the deviation.
By Rajesh at February 27, 2009 No comments:

One W.D. passes and another appears, though weak, but the movement is almost non-stop.Currently there is one over Kashmir, and another one on the way expected in 2 days !!
Result: Cold weather has totally vanished from almost all of the Indian region. Save and bar the
Himalayan region. In H.P. too, there have been very high temeratures las month, with Simla going to an all time Jan. high.
But in spite of the frequent systems in the north, much of India remains deficient in 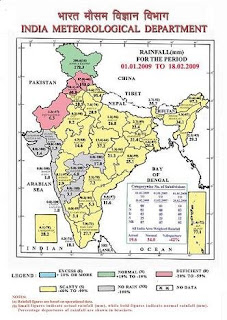 rain for the current season. This is due to the system remaining too far in the north.
Ok, I have been constantly repeating and commenting on the high and above normal temperatures in India last month. Several record highs were observed in India last month as shown in my past blogs, and constant warm weather in our region.

Well, the constant movements of W.D.'s have almost wiped out any chance of any reviving winter in the Indian Sub Continent. Temperatures, day and night continue to be warm, and today, 20th., it seems to have crossed all limits. The unusual heat has spread eastwards towards Myanmar and Thailand. Today, the highest in the region, and in Asia, was 41c at Prome,

Myanmar ! 5 places in Thailand were at 39c. Map alongside shows the unusual heat today.
Goa was 39.2c (+7) today !! Now, this is the highest EVER recorded at Goa, for ANY MONTH !! The previous high was 39c. in 1975.( Feb record was 36c before today).
Delhi was 30c today and that is also +5. I think, we could normally expect it to touch 30c in Delhi by mid-March. Certainly not mid February !
The departure map from IMD shows the warm picture of the above nor

Does it mean an early Summer ? Well. it is already early with such high and above normal temperatures. But not necassarily a very hot summer in the remaining months of the Indian summer. Summer starts here in March thru June.
So, there can be a lot of variations still with the weather patterns changing either way.

According to the IMD, this year we have been receiving a steady stream of cyclonic circulations in January and February, which made the weather warm and at times cloudy but since moisture feeding has not been sufficient, the clouds have not precipitated into rains. But we can expect some change in the climate from Wednesday evening, with the advent of the W.D.

There are four weather systems at present hovering over north India. While a western disturbance has entered Rajasthan, secondary cyclonic circulations have been spotted over south Rajasthan and Uttarakhand . The movement of these four systems would determine whether it will rain and in which regions. Rains may occur in some parts of the plains of North India, if these systems move over Punjab and westwards towards Delhi and UP, and get sufficient moisture feed.

These western disturbances and cyclonic circulations are responsible for heavy snowfall in Kashmir and Himachal Pradesh. Leh recorded a minimum of -11.6c and Kargil -18c on the 1oth..

Normally, after causing rains or snowfall, these systems fizzle out and move away, to allow dry westerly winds to sweep plains, leading to cold wave in Central and Western regions.. However, during their short life period, these systems cut off the flow of icy winds to plains. It is only after these systems get weak that wind pattern changes and the chill sets in.

But this year, formation of cyclonic circulations have been more frequent and without any break in comparison to normal behaviour. As a result of which, dry icy winds did not get enough opportunity to lash the regions south of the regions of the W.D. Moreover, in the states of Punjab and U.P. since the moisture feeding was not sufficient, the successive secondary cyclonic circulations, could not generate enough intensity to precipitate into rains.
kapadias@gmail.com

Here in India we are discussing the "heat in Summer", and the various records broken by the high temperatures. But, in U.K. the cold spell is breaking the other extreme records !

The British snows followed a cold spell that swept westward over the North European Plain and into southeastern England. The heaviest snows hit London on Sunday night and Monday with local amounts of 6-12 inches (15-30 cms). A snow depth of at least 8 inches was observed on the Channel Island of Guernsey--a most unusual happening.
The worst hit areas were the southwest of England and the Midlands. Hundreds of schools in the Bristol area were closed after 10cm (4 inches) blanketed the city overnight. Other counties affected included Shropshire, Derbyshire, Lincolnshire, Norfolk, Devon, Northamptonshire, Staffordshire, and Leicestershire.
Areas to the northwest of London were hit by heavy snow.
Cold in western Europe, not only snow, has made news this winter. But eastern Europe, including the Russian heartland, has seen rather limited cold.
In Moscow, the last four months have been unusually mild, December and January exceptionally so. However, the end of January and the start of February have had the winter's coldest weather thus far. At the coldest, it has been -22 to -26 degrees C.
Meanwhile, as discussed about India, the new records have been given in this link by the IMD. Many cities have broken their January records for high temperatures!
By Rajesh at February 05, 2009 No comments:

Not much in terms of cold weather here in India as on end of Jan. There was a slight, very minimal drop in night temperatures last week after the recent W.D. moved away, but not mu

ch to really have any effects of real cold. The anomoly map indicates a large portion in red for the 3rd. week.

And after this,at the weekend, the temperatures have started ris 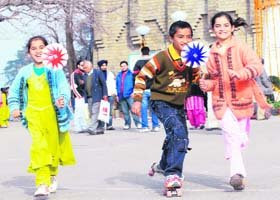 Simla enjoys an early Spring conditions, and the children on the Mall are sptightly, but missing the usual snows.

Austrailia is in the grip of a record heat wave. The city of the Austrailian Open Tennis, Melbourne, was the worst hit. The tennis stadium had to be covered as the playing conditions became unbearable, with the temperature in the playing arena at 60c !!

Melbourne has endured three successive days of temperatures above 43C for the first time in recorded history. The mercury reached 45.1C on the 30th, 44.3C on 29th. and 43.4C on Wednesday,28th.. On the 30th, 45.1C at 4.27pm was the second highest temperature ever recorded in Melbourne, behind only the 45.6C recorded on Black Friday, 13 January 1939. Melbourne's most sustained heatwave occurred in January 1908 when temperatures reached 39.9C (15th January), 42.8C (16th), 44.2C (17th), 40.0C (18th), 41.1C (19th) and 42.7C (20th). Other parts of Victoria also baked this week, with many places having their hottest January day on record. Many sites also set record highs for January minimum temperatures. The heatwave has also affected South Australia and Tasmania. Adelaide recorded a near-record maximum of 45.7C on 28th, and Scamander set an all-time record for Tasmania on 30th. with 42.2c. Melbourne's rainless spell now stands at 27 days, the longest since 1965 with a spell of 28 days.