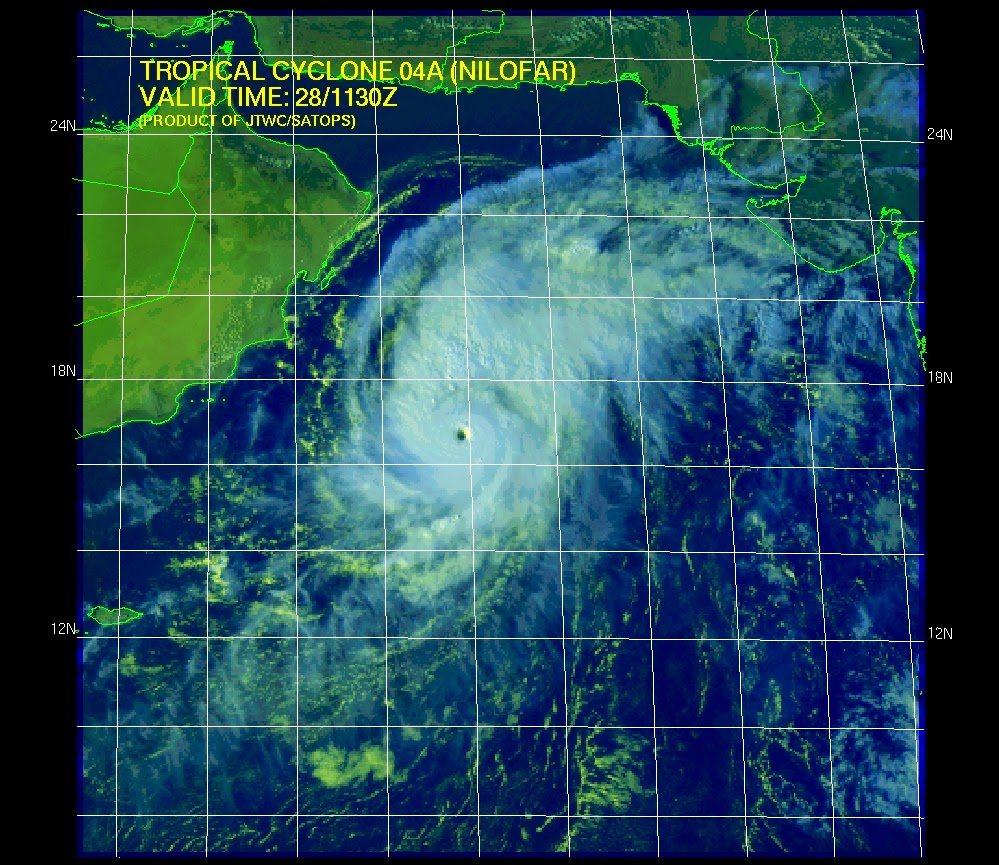 Time has come now for #cyclonenilofar to change track towards the NE. Currently at the Eastern Edge of the Sub Tropical Ridge, it will now crest the curve and turn direction. Tracking towards Saurashtra tip and Kutch region.
But low shear will still strengthen it for next 12 hrs...maybe to 125 knts ( 230 kmph).
Falling back to Cat 3 after 30-36 hrs from this posting.
Repeat from Last Post: Hitting landfall maybe as a deep Depression..

Expecting rains in South East Sindh from Thursday Night thru Friday. Intensity decreases after Friday. Can expect rainfall amounting to 30-40 mms in some regions. Mithi and regions around get showers on Friday, amounting to about 25-35 mms. Showers for Hyderabad (Sindh) on Friday.
Karachi can get showers on Thursday night and Friday, but rains will be about 15-20 mms.

Mumbai: As mentioned yesterday, Mumbai's day temperature rose to 34c at Colaba and 34.5c at Scruz. Low was at 23.0c. Wednesday expect 34/35c.
Weather getting cloudy for Delhi NCR from Thursday.

As explained, the Seasonal Sub Tropical Ridge has taken charge of its track now. Movement to continue for 24 hrs towards NW, and becoming Cat 2..

The dry air factor was mentioned here as early as 25th October, and again repeated yesterday night. Well, the swath of dry air is covering , or encircling the system from West, South-West and now South...

Very Severe Cyclone will weaken after Wednesday, and in all probability head for our original target, (see Chart below),  Around Dwarka, on the Saurashtra tip. Landfall, it seems now, will be at Deep Depression strength...

Divergence is shrinking in the East of the system...hence, the clouds East of system will gradually reduce from Tuesday. (see CIMSS Image of Divergence) 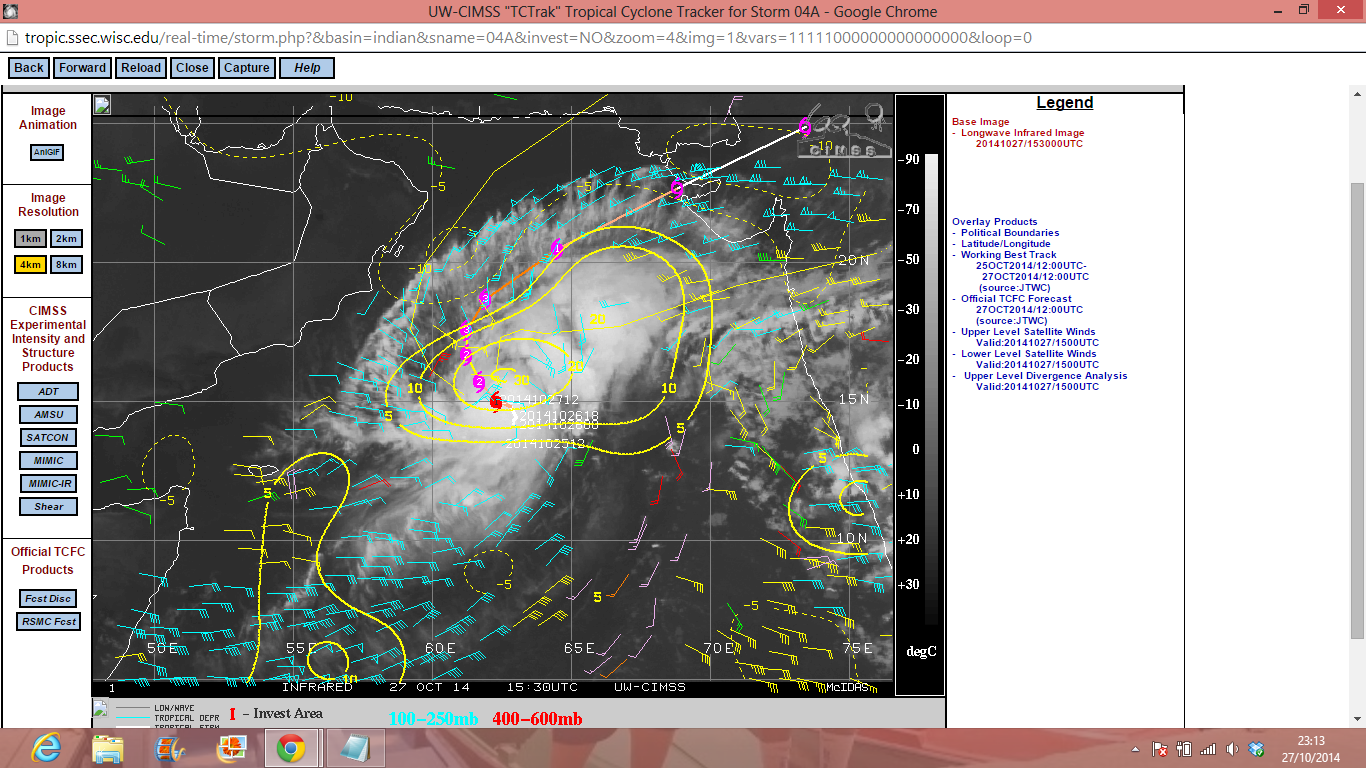 Mumbai: Tuesday onwards, gone are the overcast days ! Getting sunny and ...warm again. Days could rise to 33c/34c from the current 29/30c. Consolation..Nights in Mumbai City would be around 22/23c. Further lower temps at night in outer townships.

Pune: Clearing and rising temps...Forget the days with maximum at 22/23c...rising to 30/31c and nights getting down to 14.15c by Wednesday morning.

Oman: Seems, as the Cyclone Nilofar is scheduled to recurve, Muscat may altogether miss the rains. Day temperatures around 29/30c. and cloudy.
Rains will be restricted to the Southern shores of Oman.

As #cycloneNilofar recurves, Karachi may get clouds on 30th, and rains on 31st. At the current forcast, we can estimate around 40 mms for Karachi between 30th night and 31st October..Rainfall with heavy falls on 31st expected in South Eastern Sindh.. 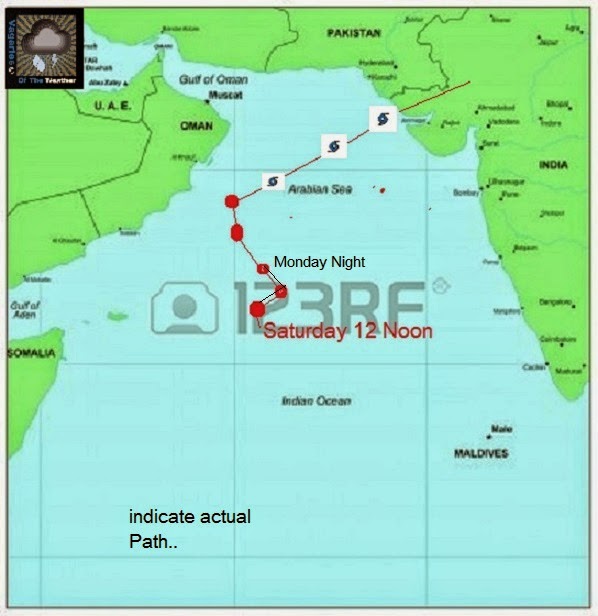 5th day of heavy unseasonal rains in Karnataka, ending 8.30 am on 28.10.2014
The Severe Cyclonic Storm 'NILOFAR' further intensified into a Very Severe Cyclonic Storm and is about 1110 kms southwest of Naliya (Gujarat) and 1150 kms south-southwest of Karachi (Pakistan). It would move north-northwestwards during next 12 hours and then gradually recurve northeastwards.

Email ThisBlogThis!Share to TwitterShare to FacebookShare to Pinterest
Labels: Nilofar

Any probability of another low over Arabian sea? Looks like easterlies are entering into AS and providing seed for lows. TN/Rayalseema as usual have missed all lows and extreme rains. 1998 cyclone over Kutch dumped > 500mm of rain in 24hrs - so now it waiting for another bounty!

After 3 cool days due to Nilofar effect, today Maharashtra temps back to normal !