BB-12 now a Deep depression at 12N 94.2E  1000 mb and 30 knts
deepening fast on Wednesday and Thursday. Can tend to weaken before landfall.
This is views of Vagaries and should not be used for commercial purposes. 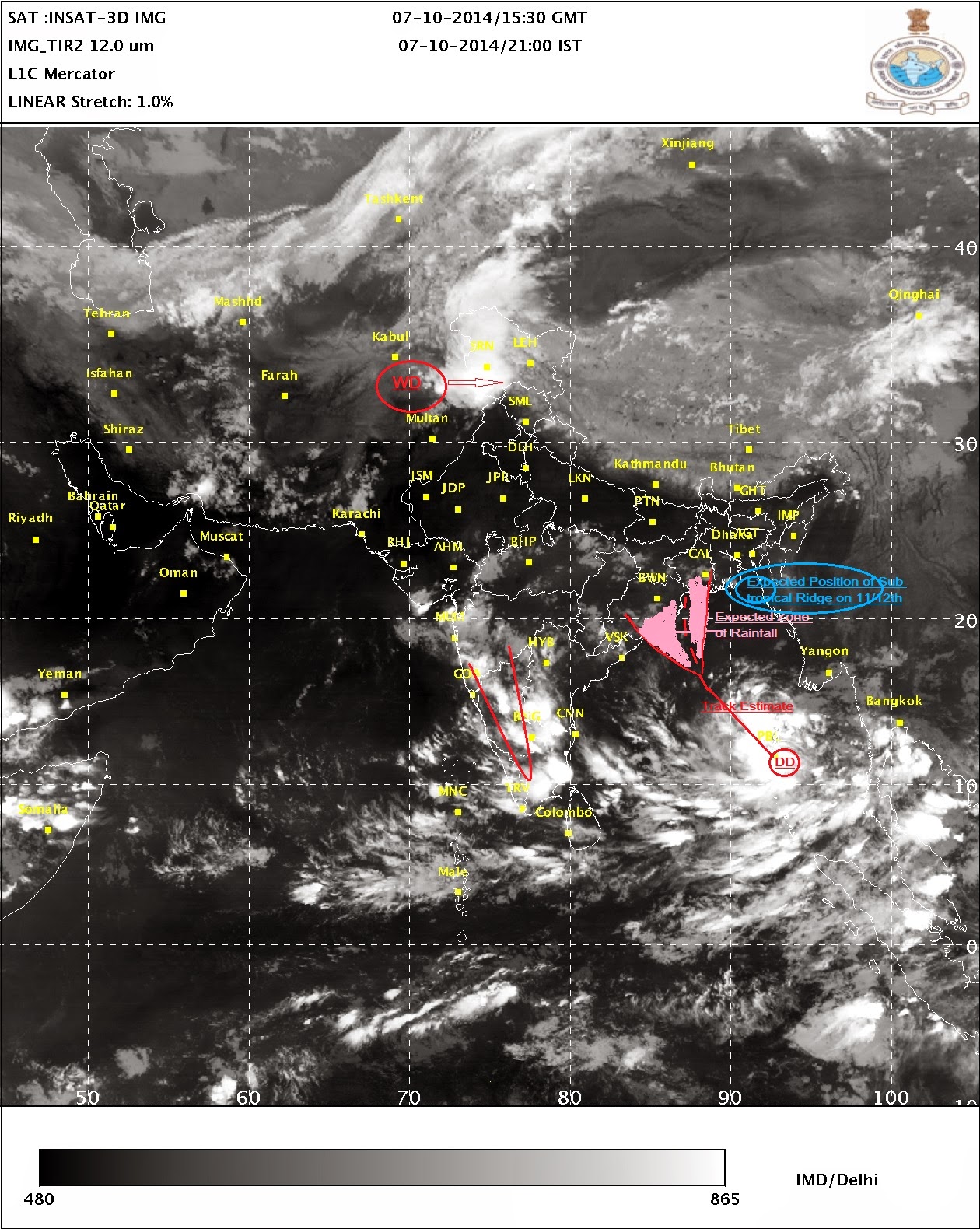 On Tuesday 7th October, Thundery developments in Eastern Skies as forecasted....Single Thunder Cell approaches North Mumbai and Outer townships from NE.....Not much rains though except Extreme North townships....and Badlapur.
Northern Parts of Mumbai got light rain...Santa Cruz measured 4 mms ..no rains in central and South Mumbai.
By Rajesh at October 07, 2014

Email ThisBlogThis!Share to TwitterShare to FacebookShare to Pinterest
Labels: Hudhud

The deep depression over north Andaman Sea & neighborhood moved west-northwestward,
Intensified into a Cyclonic Storm ‘HUD HUD’ and lay centered at 0830 hrs IST of 8th October 2014
over north Andaman Sea near latitude12.3ºN and longitude 92.9ºE, close to Long Island. It is now
crossing Andaman & Nicobar Islands close to Long Island. Thereafter, the system would continue to
move west-northwestwards, intensify further into a severe cyclonic storm during next 24 hours and
subsequently into a very severe cyclonic storm during subsequent 36 hours. The system would cross
north coastal Andhra Pradesh and south Odisha coast between Visakhapatnam and Gopalpur around
noon of 12th October 2014.

Krishnakumar - agree - whatever is driven by nature nobody can prevent - NEM failures (4th successive year) is an ecological disaster for SE India/Sri Lanka - Guess respective state governments should respond to natures warning bells proactively for risk mitigation like river linking...In past we have such cases for instance "GULF STREAM weakening" may led to icy northwest europe/northeast US - similarly with weakening NE monsoon currents may lead to desertification..what cases cyclones to form early in bay and move north west?

Any rains for NW India from this system Hud Hud ?

Why is this blog so quiet regarding Hudhud